Harmony on the Holler

Summer concerts are back in the Tri-State, and at the Under the Radar concert series, it doesn’t matter the genre of music or how big the venue is. What matters is that a certain level of artistry is presented that will wow any intimate, music-loving audience.

Hosting everything from country players to avant garde jazz, string quartets, and Mississippi Delta Blues, the Under the Radar Concert Series began four years ago through the partnership of four men and a church.

Newburgh residents Steve Amos and Ralph Hoffman and Evansville residents Rob Woodring and Steve Roll came together after attending a small concert in Roll’s living room. Shortly afterward, they decided to host small concerts of their own at Ol’ Church on the Holler located at 622 W. Jennings St. in Downtown Newburgh. The church was refurbished by Hoffman after he purchased it in 2017.

“So, and it was really cool, but people had to sit like shoulder-to-shoulder, but being like this close to the artist, I mean, it was a cool thing,” says Amos, who lives across the street from the church. “I just thought, ‘Wouldn’t it be nice if we could do that in a place that was a little more comfortable, acoustically a little better,’ but that’s where I first got the idea that people would bring food and drink to share which they do here.” 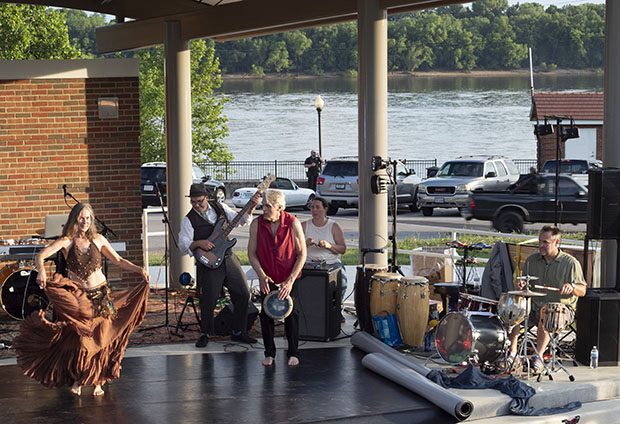 The church hosts anywhere from six to 10 concerts each year, with a capacity up to 70 people per show. Entry fee is $20 with all the revenue collected going to the artists. Some of the musicians who have played in the series throughout the years include Troy Miller, The Honey Vines, Jason Wilber, Rory Block, Radney Foster, Wayne Wallace’s Latin Jazz Quintet, Ryan Keberle’s Catharsis, and the Eykamp String Quartet.

The concert series opened this year on June 5 with funk band Factor Primo at the Newburgh Allen Family Amphitheater, just down the road from the church. Amos says the group hopes to have more concerts at the amphitheater in the future.

Though organizers don’t have any shows booked at the church yet this year, Under the Radar will host Sunny War at the Arts Council of Southwestern Indiana’s Downtown Rooftop on Aug. 22.