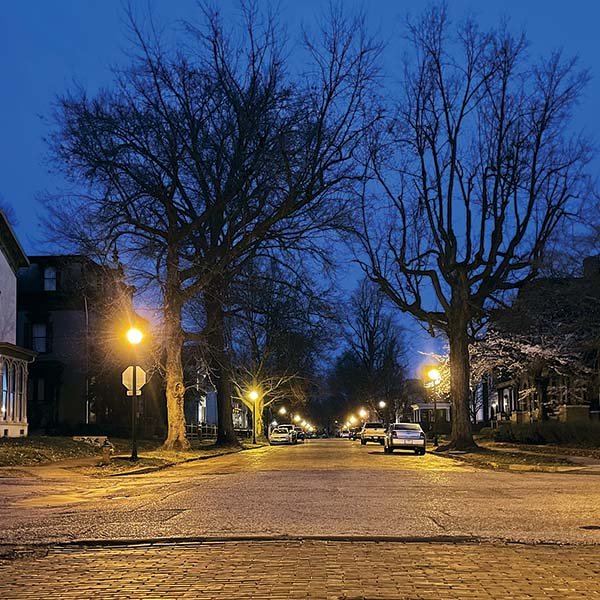 Pedestrians stroll through the Historic District just south of Downtown Evansville to admire the brick-lined street and grand homes. Thanks to the efforts of the neighborhood’s collaboration with city and utility officials, new streetlights are being erected that are more efficient while reflecting the neighborhood’s historic character.

“The old cobra-style streetlights are too tall to illuminate sidewalks, so the streets are dimly lit,” Old Evansville Historic Association co-president Karen Timberlake says. “These new lights would be for aesthetics but also safety and security.”

OEHA began discussing replacing Historic District streetlights more than a decade ago, voting on a carriage-style light and working with the city engineer’s office to draw blueprints of where they should be installed. OEHA then partnered with Vectren (now CenterPoint Energy) for the removal and installation phases, a process that OEHA member Elmer Buchta says varies from $5,000-$10,000 depending on underground wiring needs.

Timberlake says OEHA approached the City of Evansville, which agreed to match funds raised by OEHA. Kelley Coures, executive director of the Department of Metropolitan Development, says the city contributed $163,712 over a six-year period from a mix of federal urban development action grants and Art District TIF funding. In that time, OEHA raised more than $250,000 through fundraisers and word-of-mouth donations.

OEHA recently signed a contract for Phase 6, which will replace lights on Southwest Second Street from Walnut Street to Haynie’s Corner Arts District beginning within the next six months.

“This is a long labor of love,” Timberlake says. “From neighbors and friends to businesses and the city, so many people have been so generous that we’ve been able to make this happen.”