Honestly, being in high school isn’t that much fun. There’s social studies homework to do, English papers to write, and math class to suffer through. But our memories of high school are far rosier years after we took our last class.

In the July/August issue of Evansville Living, we asked our readers to tell us about their favorite memories from high school. So we thought it was only fair that we do the same, and tell you about ourselves. So here’s what we remember about our high school days.

Laura M. Mathis, Creative Director:
Presentation Academy, Class of 1981
I went to Presentation Academy, an all-girls, Catholic high school in the heart of Downtown Louisville. Founded in 1831, Pres is the oldest high school in Louisville. Some of my favorite memories were uniform/lunch break days, where we didn’t have to wear our uniform (still no jeans), and we could eat out in the downtown area. I would sometimes meet my mom for lunch at the Colonnade. Also, cheerleading — winning 2nd at State; freshman orientation on the Belle of Louisville; riding the city bus (TARC) to school; St. X football games; being Student Council president; Principal, Sr. Maureen Hayden; the senior stairs — where we would love to catch freshman try to sneak to use; climbing the bell tower to sign our names as seniors;  and our last day of school when we were finally permitted to use the formal entry to walk down the steps and out of Pres for the last time. 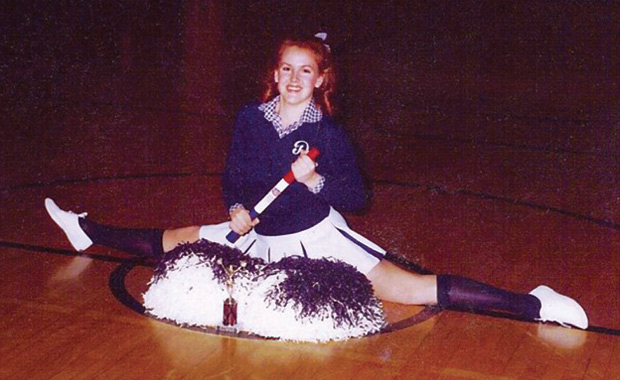 Katelyn Phillips, Marketing Manager: Reitz Memorial High School, Class of 2007 (Go Tigers!)
My favorite high school memory is definitely the themed football and basketball games. I remember my freshmen year, digging through my brother’s closet to find clothes to wear for "Gangster Night," where we all wore our hats sideways and had fake gold necklaces hanging clear to our waists! I’m thankful there aren’t photos from that night!

Kristen K. Tucker, Editor: Castle High School, Class of 1982
I was a “band nerd” as my kids fondly remind me today. Today the Castle Marching Knights are a huge power player in competitions. When I was a freshman, the band marching band was still very traditional and not award winning. My sophomore year, Director Jerry Reese came along, with a drum corp background, and began shaping us up. I made the flag line — I was a “flag girl.” I remember lots of fun, at band camp and competitions, but mostly I remember Reese’s discipline drills — standing at attention on the sidelines, not daring to move, while we watched bands in front of us perform. Agony! Today I occasionally have dreams about getting on the field and having no idea what the routine was. 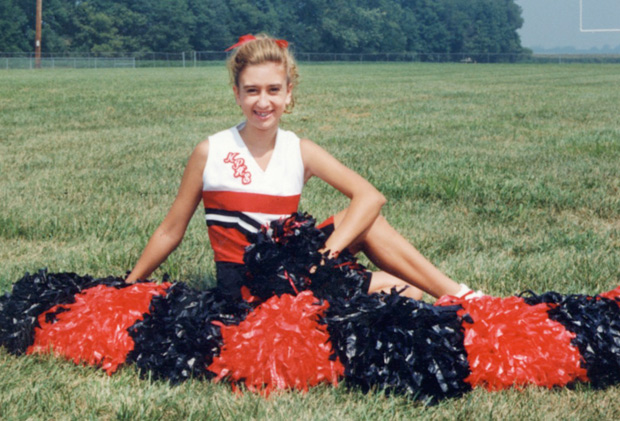 ▲ Heather Gray cheered at North Posey. (We have several former cheerleaders on staff!)

Heather Gray, Art Director:  North Posey High School, Class of 1996
Other than cheerleading, I did in high school pretty much what I still do today: create art, write, and geek out over computer stuff. My proudest moment was winning Best of Show at the Brescia University Juried High School Art Exhibition my senior year. Some of my fondest memories are those of my favorite teacher, Mrs. Bette Hunt, and going “beyond the assignment” (as she liked to say) when it came to writing essays in her English class. Having just purchased a fancy new Packard Bell computer, I meticulously designed each report with a custom graphic cover.

Emily Patton, Staff Writer: Webster County High School, Class of 2008
My favorite high school memories surround sporting events. I loved cheering with my friends at high school football and basketball games, and then waking up early to compete in cross-country and track meets.

Hannah Jay, Graphic Designer: Mater Dei High School, Class of 2008
Listening to “Hands” by Jewel in Mrs. Berberich Spanish class as she threw a stuffed Santa up in the air to having large Fiesta parties in Mrs. Vick’s class are some of the high school memories I remember. However, there is one in particular that comes to mind. Making a video for my advanced Spanish class. Never would I have thought a video making a homemade cherry cheesecake would be so hilarious. If you could image, watching high school boys making an elaborate dessert who had never made something to this extent before to a flying table. Even though the boys didn’t know what they were doing, the cheesecake was delicious! It was a unique experience and the Spanish class loved it. The teacher on the other hand, didn’t care for it at all. Oh, Mater Dei’s Spanish classes, I will never forget you.

Nathan Blackford, Managing Editor: Castle High School, Class of 1994
I enjoyed all the games I played at Bosse Field. I don’t remember the opponent, but I once hit a home run that hit the top of the brick wall behind the batting cage in left center field. That was pretty cool.