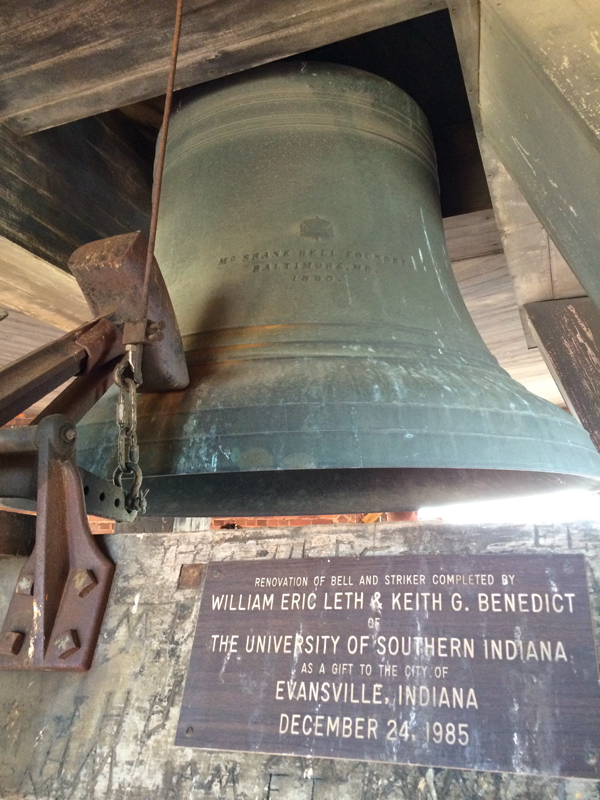 Looking at the skyline of Evansville, one cannot miss the iconic clock tower of the Old Courthouse, 201 N.W. Fourth St.

The structure — designed by Henry Wolters of Louisville, Kentucky, and completed in late 1890 — has undergone many renovations in the last four years, and its architectural design still amazes many who walk through its doors.

For those wishing to climb the clock tower, study the design, or hear about the history of the Old Courthouse, the building can be opened for guided tours. Old Courthouse Foundation of Vanderburgh County vice president Larry Bristow acts as a guide for these events, taking time to customize each of his tours to the group visiting.

“I can tailor the tour to the group’s needs and time limitation,” says Bristow. “I think I have a unique perspective.”

Bristow has been a part of two important recent times in the courthouse’s history — as executive director of the Conrad Baker Foundation from 1979 to 1986 and now as vice president of the current foundation, a position he was appointed to in 2010.

“I am fortunate because in 1979 I was taught the tour by the late Ken McCutchan, a local historian and board member who first developed the tour,” he says. “And being fortunate enough to be back now, I also can emphasize current concerns, projects, and the successes we’ve had.”

Recently Tucker Publishing Group Creative Director Heather Gray and Graphic Designer Amanda Redenbaugh attended a tour hosted by the Evansville Design Group. Both remarked on Bristow’s passion and knowledge of the courthouse and how it made the adventure up to the clock tower quite memorable.

“I was married there, so I enjoyed seeing parts of the courthouse not many people see,” says Redenbaugh. “My favorite parts of the tour were how knowledgeable Larry was and the clock tower. It offered a beautiful view of the city.”

For more information on the Old Courthouse, call 812-435-5241 or visit oldvanderburghcourthouse.com.