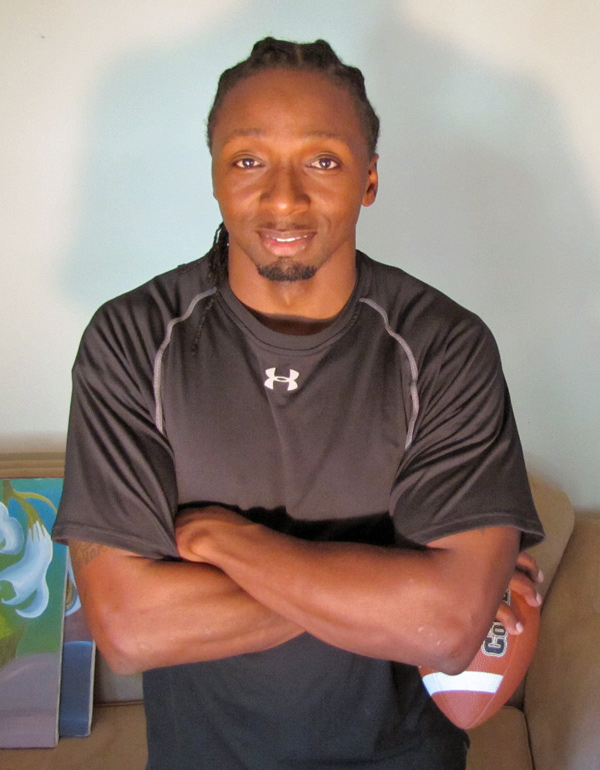 While his alma mater battled Stanford University (then ranked No. 13) on the football field, Deke Cooper sat inside the North Side Pizza King, preparing for a stromboli-eating contest. Cooper decided his goal for the competition was “to just finish.” That’s not the attitude the former North High School standout who once led his Huskies to a state football championship game usually carries. But, for a fun event, Cooper just smiled.

His smile is warm and genuine, considering he made his living on the football field tackling the likes of Jerome Bettis and other standouts. His charitable contributions include the Deke Cooper Youth Outreach Foundation, an organization dedicated to fostering mentor relationships with children, in Georgia where he lives with his wife, Gwen, and six kids, including two sets of twins.

When he was a North running back in the 1990s, Cooper shined, making SportsCenter-worthy plays in high school, which caught the attention of the University of Notre Dame, a place where football is an institution. His talents earned him a spot in the NFL, and the 6-foot-2-inch defensive specialist played professionally from 2000 to 2008.

He stopped in Evansville for a weekend in September. On his schedule was watching his alma mater in a Friday night football game against Memorial. The game was the first time he’d returned to Central Stadium, North’s home field, since his youth, and before the Huskies hit the gridiron, Cooper gave the team a speech. “My eyes got all watery,” he says. “I got goose bumps. I think I almost lost it, and they must think, ‘This guy’s crazy.’” His point: He has fond memories playing in high school, but those days didn’t last, so go out there and play like it’s your last game. The Huskies played well but lost by three points.

Though Cooper lives in Atlanta, he plans to return to Evansville more often. He wants to help North develop the football program. “This is where it started,” he says, “so I definitely want to give back as much as I can.”

As for the stromboli-eating contest, Cooper failed to advance out of the first round. Perhaps, he didn’t have enough time to prepare since he was talking to Evansville Living just before the competition.

What’s it like watching college and pro football games now?
The game looks more violent when I’m watching it. When I’m out there, it’s slow motion, but watching it, I think, “My goodness. Should I let my son play now?” He’s itching to get out there, and I’m trying to hold him off. He’ll be 5 in October.

How did your body feel after a game?
Pretty beat up, but that’s a good feeling. I knew when I hurt I had a good game. If I had a grass burn, I knew I didn’t get too much action. Stiff neck and a shoulder and a knee kind of aching a little bit — that’s what I’m looking for after a game.

Do you have a favorite football moment?
People don’t believe me, but it’s when we played Reitz (High School). Cars were backed up all the way down First Avenue. I just got chills pulling up to the game. People don’t believe it because they say, “You played for Notre Dame. You played in the NFL.” But there was something about that game.

Why did you choose Notre Dame?
It was a feeling. I’m a real visual person, so every school I visited, I would close my eyes and visualize myself making plays on that field. I went to Nebraska, Michigan, but I really couldn’t see myself in those uniforms coming out of those tunnels. I went to Notre Dame, and I could see it. It was as clear as day. There was snow everywhere, and the week before, I said I was probably going to play down South, and I don’t like to play in cold weather. Then, I committed to play at Notre Dame the next week.

What’s the hardest hit you’ve ever taken in the NFL?
I was tackling Jerome Bettis. (Editor’s note: Nicknamed “The Bus” for his unusually large weight for a running back, the former Pittsburgh Steeler was 252 pounds.) It was like hitting a brick wall that didn’t move. I got up, and I thought, “Oh my God, I’m going to have to do that all day.”

What’s the best advice you’ve ever learned on the field that translates to real life?
Resilience. The amount of times I’ve been released, I’ve been told, “No” — I have to keep going. That’s what I teach in my foundation. We teach kids how to analyze the situation and make the best choice.

What inspired your foundation?
I didn’t have (a strong male influence) growing up until I moved to live with my dad (John Dennis, now a pastor of Faith Temple Church of God in Christ in Newburgh) in high school. I had two other cousins that were recruited by Notre Dame. They were back home in Georgia, but we grew up together. They were not prepared for the opportunities. They had bad grades and were getting into trouble. Notre Dame is real big on character, so they do a nice background check before they bring players in. I saw the difference that influential person had on my life.