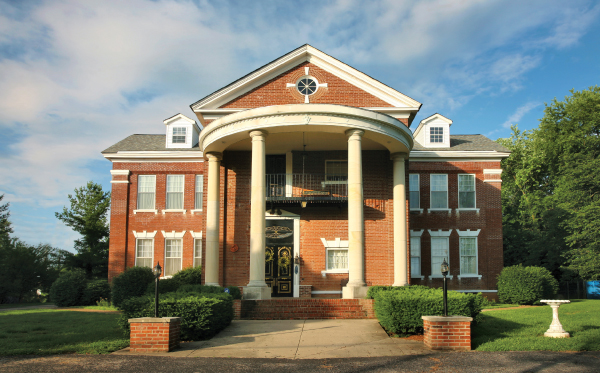 That’s what Frank and Michelle Peterlin have learned since buying the 1920 school 10 years ago. The 6,000-square-foot brick school was home to four classrooms — two on the first floor and two on the second floor, while the basement served as a cafeteria. The school, which served two grades in each classroom, operated until the late 1950s. Sitting vacant for about 10 years, the school corporation sold the building in an auction to a man named Bill Flowers, who later converted it into Cynthia Heights apartments in 1966.

Flowers owned the apartments for the next 20 years until he sold the property to Pat McDonald, who then turned it into a wedding shop on the second floor with a photography studio on the first floor. She retired when the Peterlins bought the building in 2004.

The Peterlin family didn’t live in Old Kasson for the first three years as they transitioned it to a four-bedroom and three and a half-bathroom house.

“It took time. There was no need to rush,” says Michelle Peterlin. “None of it was restored. The small compartments worked really well for what (the photography studio and the bridal shop) needed it for. We wanted to convert it to a home so five apartments wasn’t really what we needed.”

In addition to the restoration, all of the wiring and plumbing needed to be brought up to code. The Peterlins also returned the floors back to the original school floors.

“We were challenged by the floor,” says Michelle. “It used to be carpet, but because I have allergies, we wanted to go with wood floors.”

The yellow pine wooden floors are original to the school and now almost 100 years old. As yellow pine ages, it becomes harder and harder. The Peterlins also took out two bathrooms, two bedrooms, and four kitchens, and soon the property was as close to the Kasson School as it was before it became a commercial property.

Michelle says she and Frank asked themselves: “How are we going to take this large structure and make it feel like a home, and not cold, not sterile, not industrial?”

“I did a lot of drawing and a lot of walking around the property with a measuring tape and masking tape. I would mask the floor with where I thought the walls, appliances, and things should go. I would leave it there for a while and come back and make sure it still made sense. I wanted it to be warm and inviting. My husband has a big family, so it is very busy around here during the holidays.”

Because of having such a large family over for holiday meals, the Peterlins wanted a large doorway from the dining room to the kitchen to the pantry.

The pantry has all open shelves for groceries, which Michelle buys in bulk. Michelle keeps a small green cabinet in the pantry, which is the only furniture original to the school. Previously, there was a kitchen where the dining room is now and two full bathrooms divided where the pantry is now. On the other side where the living room is, residents could go from the hallway to the other bathroom. They decided to open it up and raise the ceiling back to where it was when it was a school.

Because of the 14-foot ceilings, Michelle had to take in account the scale of the room when designing her kitchen. She decided to go with larger hickory cabinets that are very tall and shallow and granite countertops. Because Michelle wanted a low-technology kitchen, she decided on a gas vintage stove. She also designed the dining room around an antique table.

Planning the upstairs was a challenge. The Peterlins have three children, 15-year-old twin daughter and son, and a 13-year-old daughter, each who wanted personal space.

“We tried to make it comfortable, fun, and have places to study and have room to do things that kids like to do,” says Michelle.

The children have a game room where they are able to watch television and play pool.

Michelle, who works as a real estate developer at the company she and her husband own, Market Realty, and as a professional artist for more than 25 years, doubles the master bedroom as her art studio on the second floor. The artwork on the walls are pieces of her own collection and is ever-changing as she sends out artwork for shows. (She recently was featured in a show at the Arts Council of Southwestern Indiana Bower-Surheinrich Foundation Gallery. Her work also has been shown recently nationally in Nebraska, Virginia, North Carolina, and New York.) Michelle added couches to the room, because that’s where her family was spending the most time. “Because that’s where Mom always is,” she says.

In the past, Michelle worked as assistant curator at the Norman Rockwell Museum in Stockbridge, Massachusetts. Through this position, she became a collector of sorts of items ranging from seashells to furniture. These collections, which she has often saved and restored, are seen throughout the home. The mirrors in the master bathroom are from the old bridal studio. The 200-pound chandelier hanging in the entryway was from the Old National Bank that was torn down to build the Civic Center. A wooden screen from a Japanese tea room and adorned with a beautiful peacock was repaired and painted by Michelle and displayed on the staircase. Venetian masks are tucked into cabinets, hang from mirrors, and decorate the walls.

The more the Peterlins restored, the more they uncovered the history of the school.

“It was a very interesting process when you took out the old drywall because the old plaster was still in place, and not only was it in place but the supports for the slate chalk boards were in place,” says Michelle. “Unfortunately Mr. Flowers wasn’t able to save the chalk boards, but it was still neat to see where they were. The wall of the kitchen was all chalkboard. The dining room windows’ woodwork is original and there are chalk trays all the way around it, which is kind of neat. It was neat to see some of that history come back. We found graffiti on some of the plaster from around 1940, which was cool. We found jacks and marbles around the yard and found notes and valentines tucked into the plaster.”

Michelle says she often notices people admiring the house who were former students at Kasson and wish to share their memories with the Peterlins.

“That’s the kind of thing we treasure,” says Michelle. “It is my house, yes, but you have to share it with people who also treasure it. We do that when we can.”