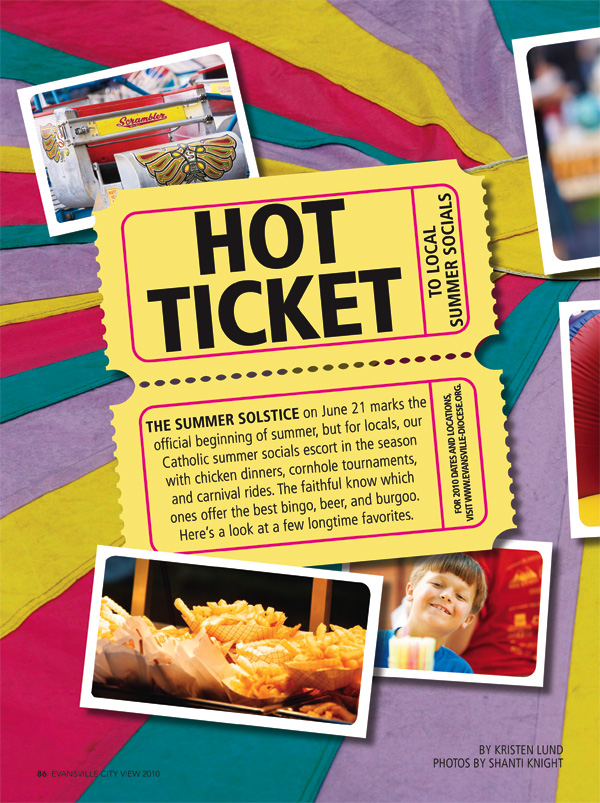 The summer solstice on June 21 marks the official beginning of summer, but for locals, our Catholic summer socials escort in the season with chicken dinners, cornhole tournaments, and carnival rides. The faithful know which ones offer the best bingo, beer, and burgoo. Here’s a look at a few longtime favorites.

Holy Redeemer Summer Social
This North Side church and school (918 W. Mill Road), built in 1952, holds its summer social in early June. On the agenda: home-cooked dinners, raffles, rides, games, and food booths. Churches often rely on their summer socials as the largest fundraiser of the year.

St. Boniface Summer Social
Built in 1881, St. Boniface — a Wabash Avenue landmark known for its grotto beneath the church (418 N. Wabash Ave.) — dominates the West Side skyline with its twin spires. While the parish’s summer social features many of the usual trappings, including rides, face painting, and home-cooked food, parishioners especially look forward to sales of elaborate, handmade quilts. St. Boniface’s quilting ministry dates back to 1940.

Holy Rosary Summer Social
In 1950, a group of local Catholics petitioned the bishop to create a new parish — Holy Rosary (1301 S. Green River Road) — on Evansville’s fast-growing East Side. Even before the first Mass was held in 1951, a group of parishioners began planning a summer social, according to a church history, and called it the “Holy Rosary Country Fair.” Despite five days of heavy rain, that first social went on, and every year, this long-running event brings back timeless pleasures from the early days: rides, food booths, and fellowship.