L is for Living 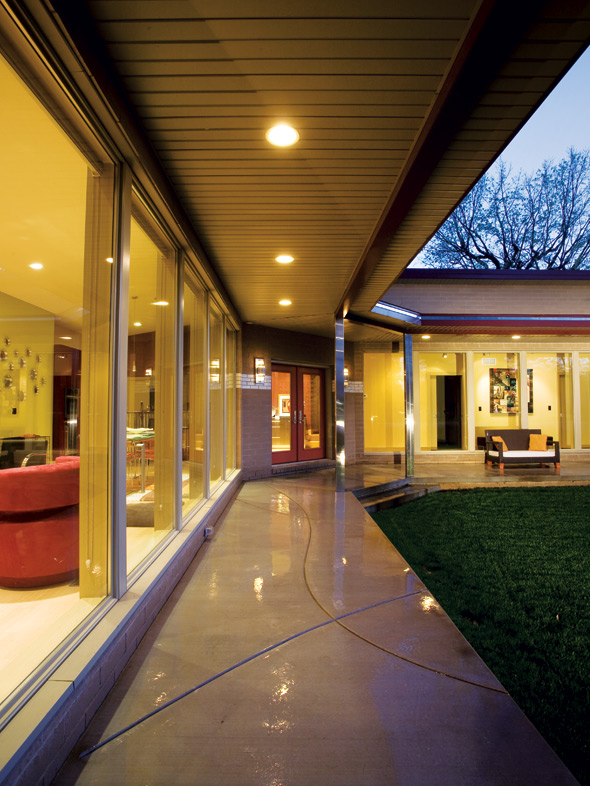 On a busy Lincoln Avenue is an area commonly known as the “state hospital grounds.” The general term includes several soccer and baseball fields, numerous walking paths, wooded trails, and a lake where visitors feed ducks on sunny days from the dock.

Across the street is the modern home of Kathy and Tim Culiver. With generous windows lining the façade of the L-shaped home, the Culivers — self-proclaimed early risers who enjoy mornings relaxing on the porch facing the state hospital grounds — say the view was a major reason to buy property on the East Side in 2005. From dogs out for a walk with their owners to various birds flying from tree to tree, the Culivers love the tranquility of nature, but they love the convenience of the city. Their abode presents a wonderful dichotomy: nearby wooded stomping grounds a half mile from Green River Road, a heartbeat of commerce.

Before the Culivers could relax and enjoy the best of both worlds, there was work to be done.
In the 1940s, this neighborhood was Evansville’s suburbia. Gradually the city expanded outward, and the Culiver home now sits squarely inside city limits. When the Culivers visited the property, they felt the suburban vibe of the neighborhood’s beginnings. Both long had been residents of subdivisions, and it was an atmosphere that still appealed to them.

What the couple wanted was a place for an eventual active retirement, and what they saw on the property was opportunity — a long-vacated tennis court with a rusted 12-foot fence. Trees, bushes, lilies, and poison ivy surrounded the court. It was the neglected yard of former neighbors, who split their property to create the rare East Side lot for an interested homebuilder. (Continued on page 2)[pagebreak]

The Culivers were sold. Armed with garden tools, the couple physically cleared a way for their home: They ripped out shrubs and cut down 12-inch diameter trees. Tim, who grew up in Posey County and frequently visited his cousins’ farms with hogs and cattle, didn’t want to strip the land of all nature. The couple left 11 mature trees, including a commanding oak in the front yard. From squirrels to hawks, the Culivers see animals comfortable in their yard; Tim’s seen a red fox on snowy winter days out his living room’s window.

With the lot cleared, Kathy prepared plans for the home’s design. A medical technologist at Deaconess Hospital, Kathy says she’s not a creative person but also recognizes she is — and Tim seconds this sentiment — very “particular.” Kathy knows what she wants.

In 2005, Kathy took the plans she had worked up to David Oldham of Elements Interior Architecture. Oldham, an enthusiastic interior designer with an eye for modern aesthetics, understood Kathy’s style. As part of Elements’ space planning division, Oldham smoothed a few rough edges to make the Culivers’ dream home “killer,” a favorite adjective of Oldham.

The center point of this L-shaped home is an island kitchen countertop. “It all starts in the kitchen,” says Oldham. “It is the focal point. When you come in, it’s the first thing you see.” More specifically, the African red rock countertop was the inspiration for the warm color palette throughout the loft-style home.

Additional inspiration for the Culiver home arose from the city’s loft development program. More than 200 lofts were created after tax incentives inspired builders to renovate neglected Downtown buildings. Oldham lives in a Main Street loft above Stratman’s Pharmacy, featured in the 2008 City View. The Culivers visited the program’s results in the middle part of the last decade as part of a public tour. They liked the lofts’ style for its updated 1950s feel.

The exterior of the Culiver home has been a curiosity to passersby and strangers who have mistaken the home for a new business. The Culivers think the slightly sloped metal roof and the home’s clean, straight lines — staples of commercial buildings — contribute to the perception.

Still, the Culivers say their modern digs felt like home even before it was finished in 2007. “When we bought the lot,” Tim says, “I felt like I belonged to the neighborhood.”