Bill Schirmer had been with Lake Michigan Credit Union in Grand Rapids, Michigan, for 18 years and had moved up to executive vice president with the organization when he felt like he was ready for a new challenge.

The answer came through a headhunter, who was interested in Schirmer for CEO at Evansville Teachers Federal Credit Union. Schirmer had never heard of the southern Indiana city, having lived in Michigan his whole life, but decided to take a leap of faith. He joined ETFCU as CEO in April 2012.

“It was a pretty big risk,” says Schirmer. “I had been in Michigan my whole life. [Evansville] is very similar to Grand Rapids — pretty conservative, very family oriented, people are very hospitable by and large. It’s a really nice community.”

Coming to ETFCU, Schirmer’s goal was to use his knowledge and expertise to bring ETFCU up to speed with the products and services offered and technology utilized in order to give more back to the credit union’s members and community. During Schirmer’s first two years with the organization, ETFCU underwent major upgrades to convert the credit union’s data processing platform to a newer system.

Those updates paved the way for ETFCU to roll out new products and services. In 2015, the credit union introduced its flagship Vertical Checking account. ETFCU also offers Platinum Rewards Checking; Smart Move mortgages; physician loans; and FHA and VA loans. A new mobile suite was introduced, which allows members to view all of their accounts, loans, and mortgages. 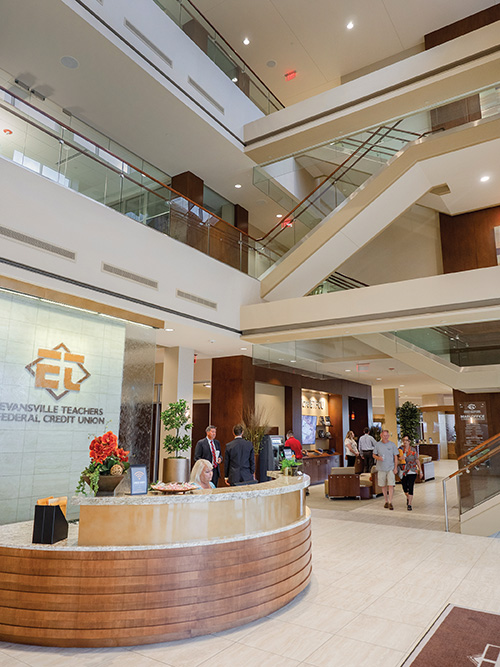 Last year, ETFCU returned more than $3.8 million to members through checking account benefits, and this year, the credit union is on pace to return more than $4.5 million.

Not only has Schirmer led the way in technological and product advancements, but he also has been a key driver of ETFCU’s geographic growth. When Schirmer joined the credit union seven years ago, the organization had 10 offices. Two years ago, the organization moved into its new headquarters on the East Side’s Theater Drive. Earlier this summer, ETFCU opened locations in Washington, Indiana, and Nashville, Tennessee, bringing the total number of locations up to 20. In October, ETFCU will open its third Louisville branch, and by 2020, the organization will have 26 total branches.

As part of Schirmer’s pervious role with Lake Michigan Credit Union, he was instrumental in the purchase of two mortgage companies. In October 2016, Schirmer used this experience to broker a purchasing deal with First Liberty Financial Mortgage, which brought the Owensboro, Kentucky, mortgage company under the ETFCU umbrella. The purchase added presence in Owensboro, Henderson, Bowling Green, and Louisville, Kentucky, and Nashville and Murfreesboro, Tennessee.

“I was chairman of the board the first two years Bill came to ETFCU, and the first thing he said was, ‘Ed, there is a lot more we should be doing for our members. To do that, we need growth and increased income,’” says Ed Cole, an ETFCU board member of 23 years. “I looked at him and smiled, having no idea the type of growth he was talking about. He leads the way with his remarkable knowledge in finance and experience in the financial industry.”

Schirmer says his goal when looking to expand into larger markets was to stay within a two-hour radius of Evansville, which includes cities like Indianapolis, St. Louis, Louisville, and Nashville. While Indianapolis is a massive market with many large banking centers and St. Louis is an older and mature market, Nashville and Louisville both are seeing the kind of new growth perfect for ETFCU.

“We had a large amount of existing members in the Bowling Green, Louisville, and Nashville areas,” says Joyce. “I think people around here would be surprised to know the membership we had in each of those areas.”

Prior to opening branches in Louisville and Nashville, the membership for each market already was at 4,881 and 2,525 members, respectively. In 2018, 15,000 new members were added to ETFCU, bringing the total membership to more than 207,000.

While Schirmer has worked to bring growth to the credit union, the ultimate goal was to leverage that growth to give more back to members, employees, and the community. The organization has become very involved with the United Way of Southwestern Indiana, Junior Achievement of Southwestern Indiana, the EVSC Foundation, and Habitat for Humanity of Evansville, sponsoring its second full build this year. 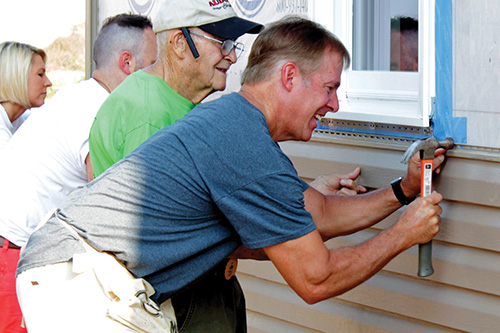 “I liken it to an apple tree or a tree that starts out as a bud,” says Schirmer. “As we grow, it creates that much more for everyone to draw from, and that really gets me excited. That’s really what drew me here was to try to create the same opportunity my former employer gave to me.”

Even nationally, Schirmer has been recognized for the changes he has brought to ETFCU, being named the 2019 CEO of the Year by the National Association of Federally Insured Credit Unions and appointed to the Community Depository Institutions Advisory Council by the Federal Reserve Bank of St. Louis. Schirmer’s focus, however, remains on building a team that can turn vision into action to better members and the community.

“It was a leap of faith for me coming in, because you never really know what you’re going to be walking in to,” he says. “The staff is second to none, and they are really the ones who make ETFCU what it is today. You can cast all the vision in the world but if you don’t have people who can carry it out, execute the game plan, have positive attitudes, and know how to get it done, the best plans are laid to waste.”