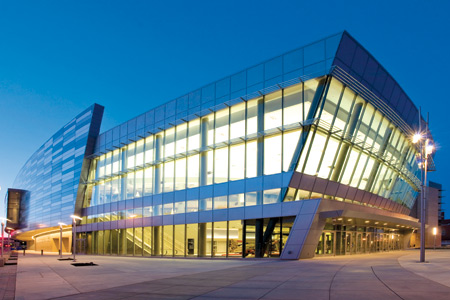 When Downtown’s stunning $127.5 million Ford Center opened at the corner of Main Street and Martin Luther King Jr. Boulevard last November, fans flooded the gates for its opening act of Bob Seger and the Silver Bullet Band and packed the house for the University of Evansville men’s basketball season opener — a nail-biting victory against NCAA national champion Butler University. The new arena succeeds Roberts Stadium’s 55-year run and is home to both UE basketball and the River City’s professional hockey team, the Evansville IceMen. With its inaugural year underway, Evansvillians can’t help but boast about the venue’s sleek, curved exterior and how it continues to attract more customers and greater profits to local businesses.

As anticipated, the surrounding restaurant and bar scene is booming. Tracey Mears, kitchen manager at Main Gate Sports Bar & Restaurant across from the Ford Center, says business on any event night is “outstanding; it’s like night and day from before the arena.” Patrons spill out onto Main Street while waiting for a table — two hours before and after an event. Up the street, Salad World is sharing similar success and has extended their weekend hours to accommodate the arena’s event calendar. Although reservations at Salad World aren’t required, says co-owner Lacey Howard, “It’s something to consider for parties larger than six, especially on big event nights.” To guarantee a place to dine within walking distance of the arena, restaurant owners suggest making reservations or eating at least one and a half hours before any event; most places are first come first serve.

If there isn’t ample time for pregame dining, patrons can find plenty of food options inside the arena. There are six concession stands, plus an “express” version of the locally owned Acropolis restaurant, and there’s also a public bar for beer, wine, and cocktails on the main concourse in addition to the beer available at concessions. Convenient cup holders on the lower level and the comfortable, padded seats make a munching experience in the stands sufficient.

Downtown and surrounding businesses are certainly profiting from the area’s biggest and boldest attraction, and its event calendar is booking fast. Fans can expect about 135 events at the Ford Center each year, including sporting events, concerts, comedians, exhibitions, and more.