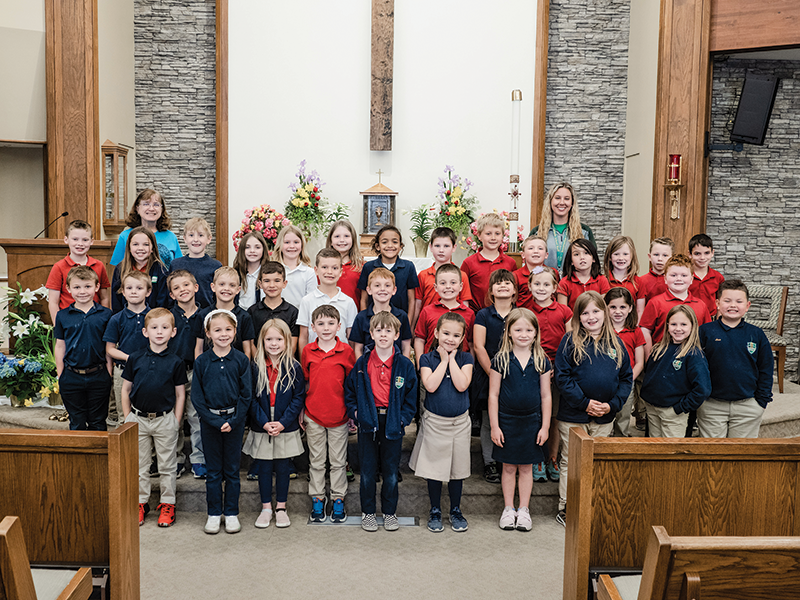 First grade teacher Jennifer Schmitz began this project in 2011, inspired by that year’s Diocesan theme: “Make a difference, it all begins with a single step.” She gave $5 of her own money to each of her 17 students who turned $85 into $797, most choosing to launch fundraising campaigns for chosen organizations.

Today, the Make a Difference project has grown more than Schmitz expected. When Jennifer Meyer joined her teaching Resurrection’s other first grade class in 2013, she quickly implemented the project with her students, doubling the amount of first graders involved and raising more than $119,000 in the past 11 years.

“I want them to have their eyes open to see the needs around them,” she says. “It’s not the amount that matters, just the lesson they are learning — even though they’re young, they can make a difference in people’s lives”

This year, two students raised almost $3,000 for “Ballistic Buddies,” an organization that purchases protective vests for police K9s. Another bought brownie mix and sold baked goods to raise $550 for tornado victims in Kentucky. One first grader asked for donations for Woodbridge Nursing Home, and even started volunteering there after raising $360. In total, the class has raised more than $11,000.

“Every year, it is so powerful to see the joy they start feeling for helping others. It brings everything back into perspective, just seeing life through their eyes,” Meyer says. “They are learning they can make that difference. It’s not somebody else who has to go do it. They can be the ones to help, in ways both big and small.”