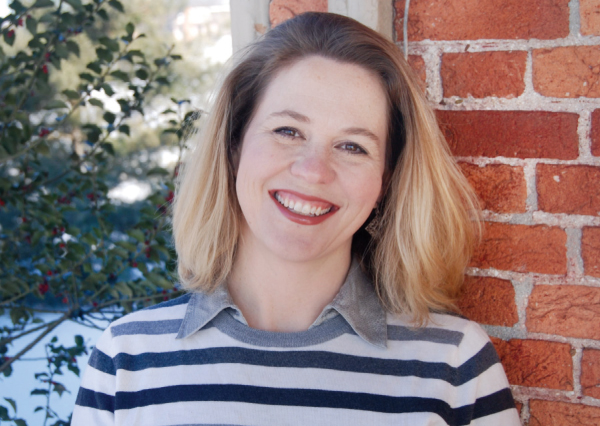 Paige McFarling’s past is filled with music. Growing up in the Evansville area, she took lessons in piano, flute, oboe, and voice with teachers trained at Eastman School of Music, The Julliard School, and New York Opera. She met world-renowned musicians. And she sang in multiple honors choirs, community choirs, and theater.

But until she took a marketing job with the Lancaster (Pennsylvania) Symphony Orchestra last year, her career never had anything to do with music. Earlier this year, McFarling was named the orchestra’s new executive director.

McFarling’s career has involved environmental science, banking, school leadership, and more. She held a vice president position at Old National Bank, then went to Evansville Day School as its director of advancement to have more time for her three young children.

In 2009, she was recruited by Linden Hall School in Lititz, Pennsylvania, where she was the chief operating officer. She says there was a “major shift” at the school in 2013, and she decided to leave.

“I was headed off on my own to decide what I wanted to do next in my career, and a friend of mine who is on the board of the symphony who asked, while I was ‘hanging out doing nothing’, would I go help the symphony,” says McFarling.

She lived in New Harmony, Indiana, as a child, where her mother was the president of an international music festival. She saw a lot of world-class musicians perform live, which sparked her interest in music. She sang in the choirs at Central High School and the University of Evansville, as well as other community choirs and theater.

“All of my music experience, passion, and expertise were built in Evansville and New Harmony,” she says. “I studied with Jack and Sue Schriber and Terry Becker, whom I know everyone loves. I learned a lot from Bob Jones at Old National. There are so many things about Evansville that have given me the roots to stand on and the strength to grow and try new things. I will always be very connected to Evansville.”