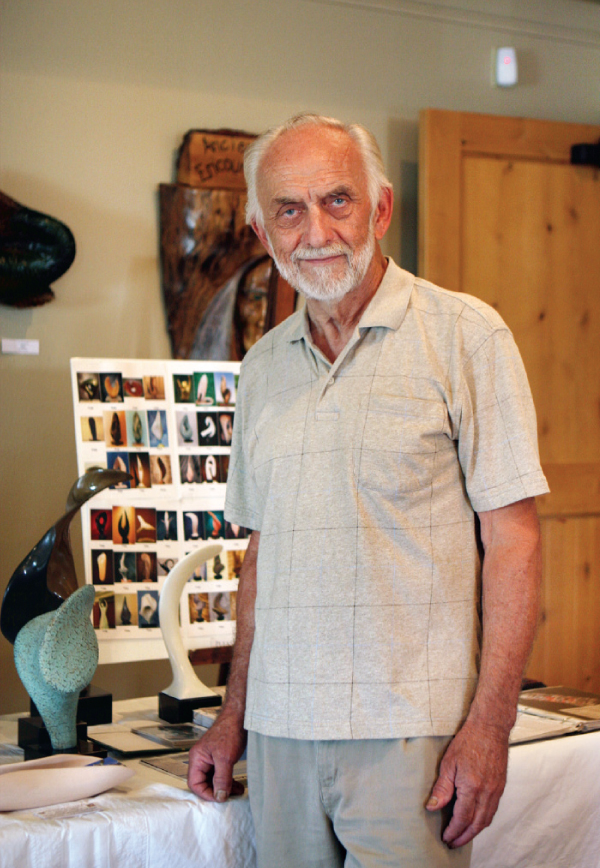 Bob Zasadny is a sculpture artist who uses a unique mix of fiberglass and recycled materials to create abstract sculptures. In his early 20s, Zasadny worked for a fiberglass fabricating shop in his native city of Chicago as a production worker. Once he got to know the material and how to apply it, he decided to follow his passion of art.

Zasadny’s art eventually led him to the Princeton, Indiana, area 26 years ago. Inspired by shapes in nature, he submitted an idea to Keep Evansville Beautiful in 2011 for a sculpture at the Evansville Airport Gateway Welcome Monument.

“I read about it right toward the very end of the call, found out the requirements, put together a small model, and that was accepted as one of the contenders for the final selection of six entries,” says Zasadny. “Then they had a process of elimination ultimately down to two (contenders), and I was fortunate to be chosen (on March 24).”

The sculpture titled “Aerial Beauty” will be made of Styrofoam, a steel support framework, and fiberglass, and will soon grace the Welcome Monument wall at the Evansville Airport Gateway. The shape of the wings on the abstract sculpture are similar to propellers of an LST or of a P-47 Thunderbolt aircraft, and the wing curves recall the bend in the Ohio River. They also relate to pods on the native Honey Locust tree. The body of the sculpture is similar to the shape of an American Indian knife-like tool made from deer antler or a piece of flint. The design also was influenced by the logos of the two airlines that use the airport, Delta, and American Eagle.

“And it relates to man’s early dreams of flying and flight, which seems to be the most appropriate theme for an airport,” says Zasadny.

Entirely funded by private contributions, Keep Evansville Beautiful has received several grants from organizations but still needs a substantial amount of money from additional resources. When the entire amount is raised, a contract is expected to be awarded to Zasadny’s choice of manufacturer Weber Group, Inc., in Sellersburg, Indiana, to fabricate, transport, and install the finished sculpture.

“This is the culmination of years of preparation for this moment because every job that I’ve had and every path that I’ve taken have all led to this,” reflects Zasadny. “I have to thank God for giving me the health and wisdom to create art that is inspired by all the beautiful and intricate shapes He has created and giving me the opportunity to share it with others. This is the right moment in my life for this to happen.”

For more information about Bob Zasadny or make a donation for “Aerial Beauty,” visit bobzabstractsculpture.com or keepevansvillebeautiful.org.