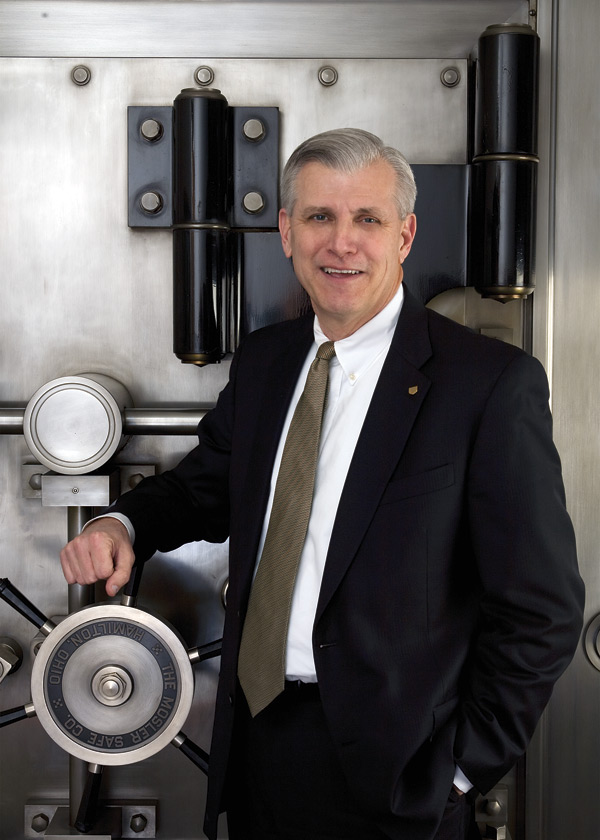 Mark Schroeder has a strong German last name. He should. His family came to Jasper, Ind., from Cincinnati in the late 1830s. It was a time when Southwest Indiana received an influx of Deutsch immigrants with classic names: Weinzapfel, Goebel, Muehlbauer, and Nurrenbern. Five generations later, Schroeder remains in the small community just east of the River City. He had joined German American Bank as a vault teller in 1972 under the influential guide of his father, Clarence. He worked his way through the ranks until landing the role of CEO in 1999.

Recently, it’s been a time in his career when many people have been focused on banks. The intrigue, borderline outrage, stems from the federal government’s $700 million bank bailout. The effects continue to have some taxpayers reeling, and so much of their anger is fueled more at governmental spending than banks “too big to fail” — such as Goldman Sachs, J.P. Morgan, Bank of America, and Citigroup — and the problems that arose from the credit crisis in the fall of 2008. Then, hundred of billions in mortgage-related investments went bad, and a credit squeeze hit Wall Street. It was the biggest crisis for the stock market since the Great Depression.

Lost in media frenzy surrounding midterm elections were issues about the banking industry. In comparison to those super banks, Schroeder’s moves with German American Bank seem wise, though he credits much of his success these past few years to the advice of his mentors who stressed the importance of time-tested management strategies. He describes German American Bank as a “regional super community bank” that didn’t get caught up in an overemphasis on the real estate securities market. Instead, one focus for German American was traditional loans, and as a lender, Schroeder focused on his clients’ long-term goals with a loan structure that was realistic for clients to repay. While the 2008 crisis had banks floundering, German American Bank posted successive record quarterly earnings.

Such successful, profitable practices continue today for German American Bank with a 100-year history in the area. In early 2010, the Jasper-based bank moved into the Evansville market by purchasing two Farmers State Bank locations. The push was needed, Schroeder admits, because Evansville is the region’s population hub. By December 2010, the company had merged with Bank of Evansville. German American’s 33 branches in the region, including five in the River City, received a boost, and the most recent figures show German American Bank had total deposits of more than $1.2 billion, total assets of nearly $1.7 billion, and shareholders’ equity of approximately $150 million.

These achievements require expert knowledge from his employees, and Schroeder says the University of Southern Indiana and the University of Evansville are two of his biggest talent pools. So in an era with banks “too big to fail,” German American Bank remains strong with an emphasis on local customers — and an employee base to match.