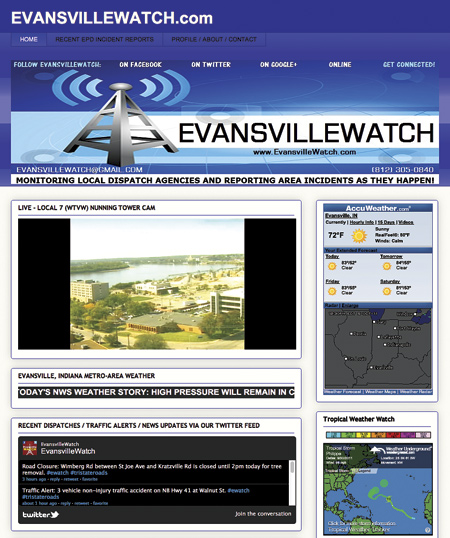 When the 47-year-old Bill Merkel was a child, he’d sit on the front porch of his parents’ house and listen to a radio scanner. It was family fun to hear reports from dispatch agencies transmitting over the airwaves. “It revealed the excitement going on in town,” Merkel says. “Ever since then, I’ve always had one on in the background.”

Years later in 2009, Merkel discovered Twitter — a social-networking, micro-blogging site — and he learned “weather geeks” like himself were posting updates on forecasts and severe storms. The “scanner freaks,” Merkel says, had amassed thousands of followers. He classified himself in both groups and created EvansvilleWatch, a Twitter account updating followers on traffic jams, road construction sites, police activity, and weather forecasts. Local media does “a great job,” Merkel says, “but there’s just a lot of information that doesn’t get out to the public.”

Along with the Twitter account, Merkel launched a blog with the same name. Merkel’s posts covered a range of topics from informative to heartbreaking: firefighter benefit events to robberies in neighborhoods to arrests made in child molestation cases.

The response was slow going at first. “I never have been a fan of Facebook, but people kept hounding me to do it,” Merkel says. “I’ve been blown away at the way it’s taken off on there.” In less than two years, Merkel has nearly 10,000 Facebook fans and 4,500 Twitter followers. Merkel’s audience hasn’t escaped marketers’ eyes. “A few people have contacted me about placing ads,” he says, but right now, Merkel treats it like a hobby, not yet a business, because he already owns a transportation company Comaier Services with his wife Kim. That endeavor keeps him busy. Merkel’s four volunteers, including a woman who posts throughout the night, lighten his load. That’s welcomed relief for Kim. “She sometimes hollers at me at night,” Merkel says with a laugh. “I get so involved with this sometimes that she wonders if I’m going to come sit with her.”