This Memorial Day, we’re featuring three pieces of Evansville’s public art that honor those who died in service to our country and remind us what soldiers fought for.

The four towering ionic columns looming over the Evansville riverfront, each standing 26 feet tall, serve as visible testament to the foundations of our nation. The pillars of the Four Freedoms Monument represent freedom of speech, freedom of religion, freedom from oppression and freedom from fear. These distinctly American values are enshrined in the monument, which serve as the city’s most visible form of public art.

Erected in 1976 based on a design by Evansville architect Rupert Condict to celebrate the nation’s bicentennial, the monument is also rooted in Evansville’s history. The limestone columns once adorned the C&EI Railroad depot near Downtown Evansville. The building was designed by architect Daniel Burnham (who also designed the Flat Iron Building in New York City and Union Station in Washington, D.C.) The train station was torn down in 1961, but the columns were spared. Now they loom above 50 limestone pedestals that symbolize the states of the union. The 13 steps leading to the monument represent the 13 original colonies. The monument has long been one of the most recognizable landmarks in the city, but it is much more. Looming large on the riverfront, it is a gathering spot for both solemn and celebratory events. 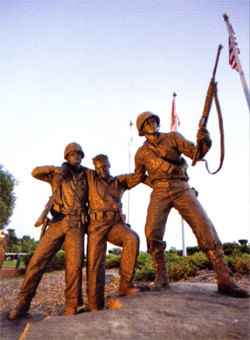 Korean War Memorial, 1992
Located on the Evansville Riverfront near the Four Freedoms Monument

The sculpture, shaped from scrap copper and wire, captures the intimacy and camaraderie of war as two weary and fatigue-clad soldiers support one of their wounded brethren. The sculpture is mounted on a staggered base that resembles rocky terrain. Steve Shields, who also created the Desert Shield-Desert Storm Monument in Evansville, first began working in copper while he and his wife were living in Egypt for a year.

He returned to his home in Hopkinsville, Ky., and began work on his first public piece using welded copper – a pioneer figure created for Hopkinsville’s Pioneer park. Shields went on to create a series of life-size characters – Native Americans, mythological figures, a coal miner, a country fiddler, children, and the soldiers for the monuments in Evansville. The Korean War Memorial was erected in 1992 – almost 40 years after the war’s end – with money raised by Marine veterans. 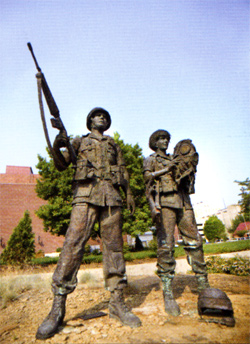 Two soldiers – a man and a woman – are caught in a candid moment of weariness from war in this tribute to the veterans of the Persian Gulf War. Both are clad in full combat gear; the male soldier rests an upright rifle at his side while the female soldier pulls a gas mask from her face.