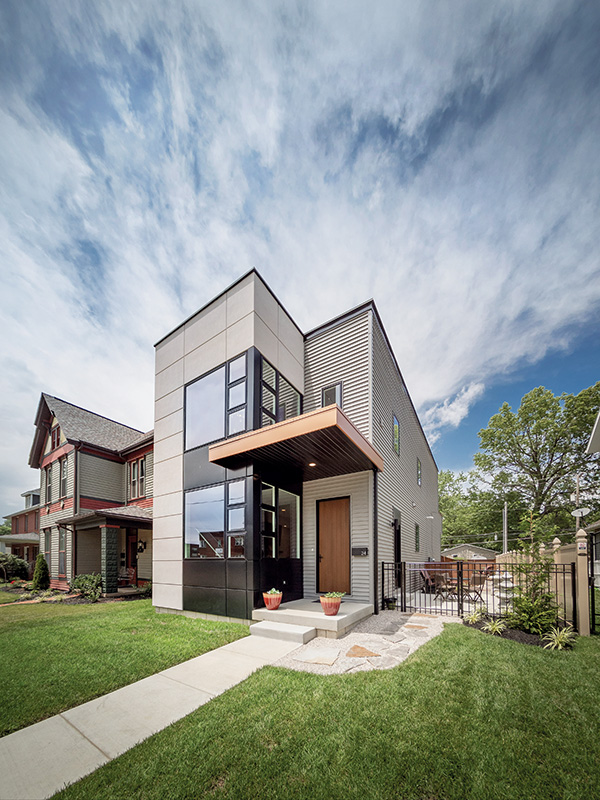 Connections, community, and placemaking all speak to Nathan and Noelle Mominees’ values as owners of Mominee Design Build. When the opportunity arose to help develop the Haynie’s Corner Arts District, it was a perfect fit.

“Getting to revive a neighborhood like that definitely has intrinsic value for me,” says Nathan. “The sense of community we’ve come to know and experience down there is really fantastic.”

The Mominees’ first project in Haynie’s Corner was with HOPE of Evansville in 2016 through a program designed to offer affordable housing options and increase property values in the area. Next, the Mominees built a residential home for a family on Adams Avenue, which was the first full market rate new home build in the neighborhood for almost a century.

Now, people are drawn to the changing and growing area, keeping the Mominees busy. So far, Mominee Design Build has constructed six homes in Haynie’s Corner and is working on another three projects, including a townhome project on Jefferson Street scheduled for completion in spring 2021. Their projects have spanned a wide variety of styles, from homey craftsman-style builds to truly modern architecture, like Tabetha English’s home on Washington Avenue. They all, however, have Mominee’s distinct contemporary feel and impressive use of space. 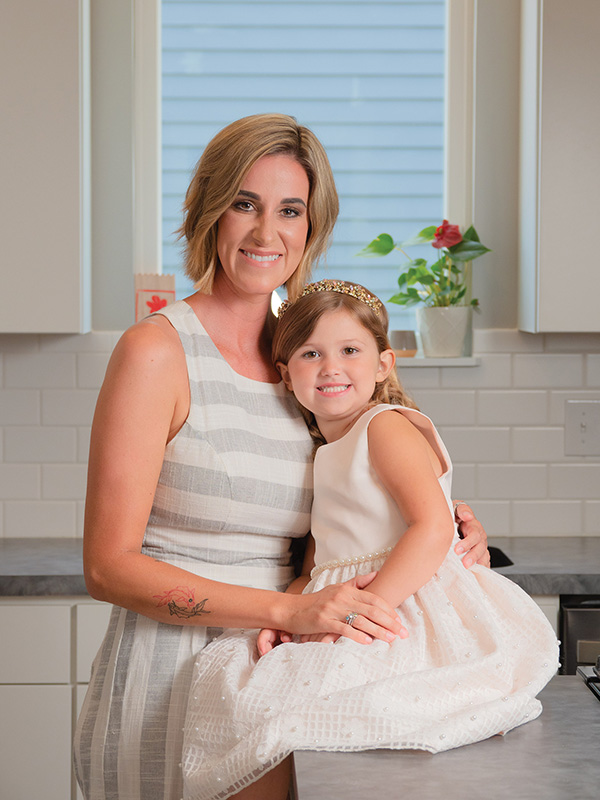 This year, the builders entered their first home into the Parade of Homes tour, also on Adams Avenue next door to their first full market rate new build and across the street from the first modern design accepted on Adams. The homeowners, Tim and Becky Robards, were drawn to the area for the same reason the Mominees were. They wanted to move from their North Side property on a large amount of land to a city home with more activities and community life nearby.

“We call it from treetops to rooftops,” says Tim.

“There are a lot of options,” says Becky. “You don’t have to get in your car. You can walk to almost everywhere you want to go, or you can bike. It’s very convenient for us, and it gives us more options.”

Tabetha has taken Downtown living a step further, by selling her car after moving into her home on Washington Avenue on Valentine’s Day this year.

“I haven’t regretted it,” she says. “The area is so much fun. I’m really trying to embrace this Downtown style of living.”

While the Robardses’ home has a contemporary craftsman feel, Tabetha’s home is modern, with a flat roof, large glass wall, intentional asymmetry, and a contemporary use of the 1,500-square-foot space. Tabetha says the lot had been on the market for a while, she imagines, because many were turned off by its small dimensions. 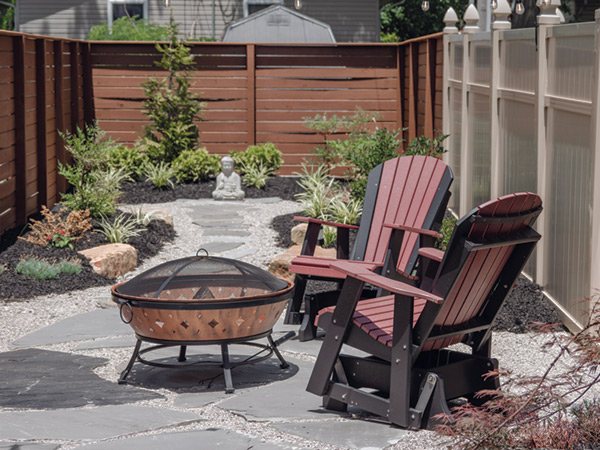 “They didn’t have the vision that I did, because I was wanting something small scale anyway,” says Tabetha. “It was a perfect match. When I saw this lot, I thought it would be a great opportunity to help develop the area and build a smaller-scale home using all of the space super efficiently.”

Instead of a large yard that requires lots of upkeep, there is green space in the front yard, with a hardscaped Buddhist-style Zen garden in the property’s side yard. There still are plenty of outdoor spaces for Tabetha and her 4-year-old daughter Harmon to enjoy, however, from the Zen garden to a balcony patio off the master suite.

Throughout the interior of the home, Tabetha has kept with an Asian-style theme, keeping her décor clean and minimal and the focus on the modern architectural touches, like the fireplace in the living room and the large window wall that showcases the exposed metal staircase. With three bedrooms and two full baths, Tabetha is even able to use one of the bedrooms as a yoga studio.

“I’m definitely an outdoor person, so I spend a lot of time on that outdoor balcony and the side yard,” says Tabetha. “But even just being able to sit on the couch — we have all that window space in the front — and seeing people roaming around and enjoying the area is pretty cool.” 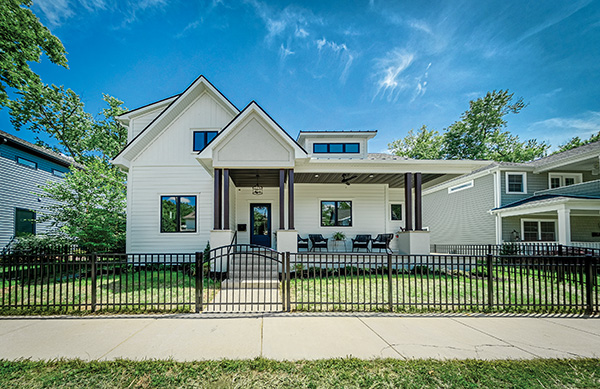 The Robardses also have embraced Downtown living in Haynie’s Corner with open arms. One of their top priorities in building their new home was a spacious front porch to host neighbors or sit and listen to music coming from the corner. Another must-have for Tim and Becky was a pool, a rarity for properties in Downtown. The smaller lots in Haynie’s Corner proved challenging, but the smaller plunge pool was the perfect addition for their large family, with four married adult children and 11 grandchildren. The Robards have already been enjoying family gatherings, moving into the 2,560-square-foot home in early June, just in time to enjoy the outdoor porch and pool spaces. 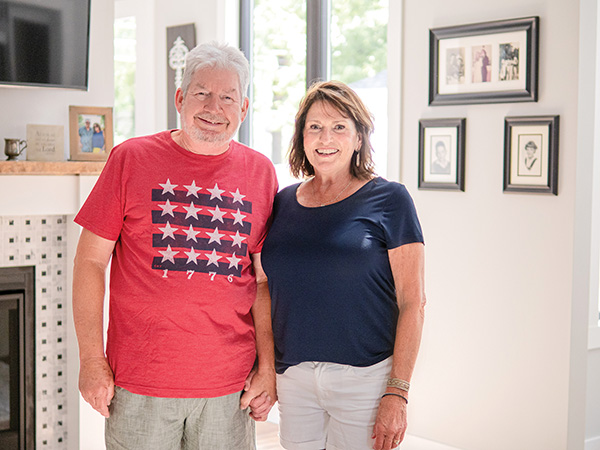 “Of course, we love our family to be here with us, so the pool came in probably third on the list,” says Becky. “But Nate Mominee had to tweak it pretty good to get everything we wanted in here, and he did. But it was really important for our kids to be comfortable here.”

The three-bedroom and three-and-a-half-bath house still carries rustic touches that pay homage to their previous home, with locally made barndoors from a barn in Posey County on the master bathroom and in the upstairs hallway overlooking the living room with 20-foot ceilings. The post at the bottom of the stairway also is salvaged barn wood.

“We came from a home that was really rustic,” says Becky. “[Nate] has carried that real, calming rustic to it without overwhelming it, so it’s still timeless.” 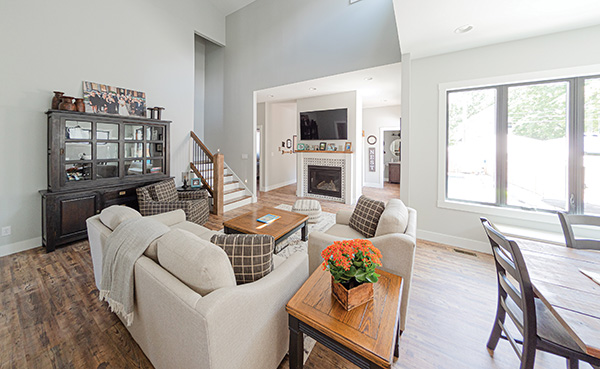 For the Robards, even with the unique design elements and open gathering spaces, their home is more about being a place to welcome friends, family, and the community. It isn’t the style that makes a home, but the people.

“No matter the pool or the location or the neighbors or all that, Becky has always made our home something people want to come visit and stay comfortable in,” says Tim. “It’s not really about the couches — what they look like — or the ceilings. Those are nice touches. But it’s mainly about being able to accommodate your friends, accommodate people who are going to come see you and your family, and making sure no one worries about anything other than enjoying themselves and feeling at home.”