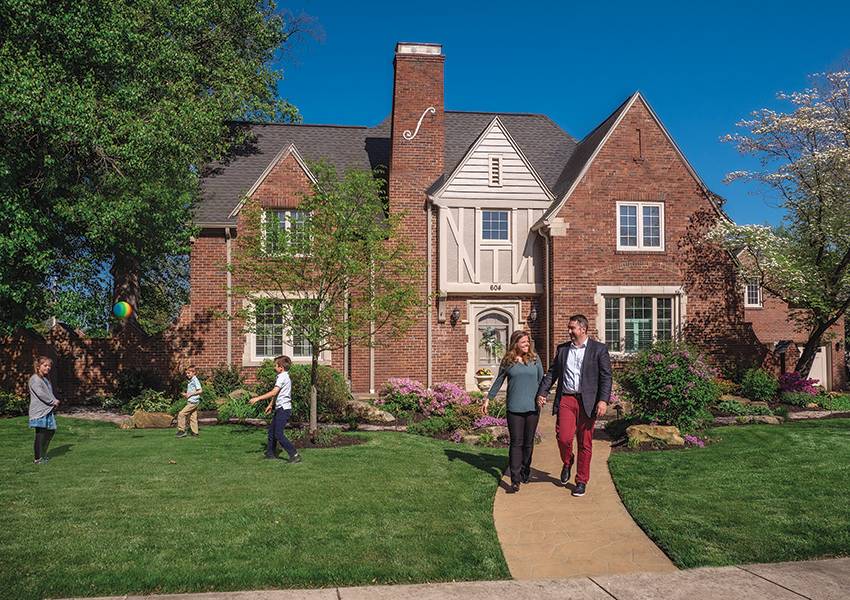 From historic abodes to modern fare, beautiful homes are plentiful in the River City. Our neighborhoods abound with distinctive residences featuring custom designs and magnificent details, and, as we’ve discovered, each has a unique story. From the rolling hills of the West Side to Water Street in neighboring Newburgh, we hope you enjoy Evansville Living’s 2022 list of Most Beautiful Homes.

Why It Stands Out: With its steeply pitched roof, decorative timbering, and patterned brickwork, this Tudor Revival on the corner of College Highway and Lincoln Avenue is a marvel of Old English architecture. Joe and Julia Langerak moved into their Lincolnshire neighborhood home in November 2021 with their four children: Joey (14), Martha (11), George (8), and Louie (6). “We wanted to get back into an older home that had the charm of a Tudor style, but we needed one with five bedrooms because we have four kids,” says Julia. Inside, the home features original hardwood flooring. Three sets of sliding glass doors at the back of the home leads to a stamped concrete terrace and pergola in the backyard — professionally landscaped by Dallas Foster in 2018 — that is surrounded by an extensive brick wall with architectural accents that stretches to the front of the house. “The stonework around the front entrance is really beautiful. I think the high arches from the Tudor style (and) the angles are really neat,” says Julia. “The landscaping is just beautiful. There’s so much color. It’s probably what actually drew me to the house the most.”

Why It Stands Out: Known as the Williams-Raab house after original owner and builder Henry Williams, this Federal style half house is an eye-catcher overlooking the Ohio River along Water Street in Newburgh, Indiana. The home is owned by Lisa and Rick Wells, former Texas residents who moved in early May after retiring from the airline industry. Built in 1843, the historic house is surrounded by 150-year-old iron fencing and adorned in bright, pineapple yellow paint. The home has undergone several additions and remodels throughout the years but stays true to its historic character, including the original 10-inch thick brick walls. “You can be inside this home and not hear a thing outside,” says Lisa. Her favorite part, she adds, is an exposed brick archway leading into the kitchen. “We’ve been here in Newburgh for right about a year before finding this house, so we were just looking for the perfect house and we didn’t know it until we saw it. We absolutely fell in love with it,” says Lisa. “It’s kind of a dream home.”

Why It Stands Out: Shannon and Robert Wathen weren’t fully attracted to this one-story ranch on Bayard Park Drive when they purchased it in 1998, but they saw a vision of what their forever home could become. Built in a modern Prairie Home style, it is modeled after a home Walter Moll, its first owner, fell in love with while in Palm Springs, California. “When we moved in here, he actually lived on the corner down from us,” says Shannon. “He came walking by one day and asked us if we would be ready to sell it back to him, because he wanted it back. It was not too long after we bought it and we said ‘no,’ sorry.” The Wathens have made a few renovations to their home since moving in, including modernizing the kitchen in 2007, adding hardwood flooring throughout the home, sodding the yard, and installing new blinds. But the family has kept the original integrity of the H.G. McCullough-designed abode, basking in the natural light from its floor-to-ceiling windows across the back of the home. “Our blinds are closed maybe five percent of the time,” Shannon says. “The brightness just brings, in my opinion, happiness to this home.”

Why It Stands Out: It’s impossible to walk past the home at the corner of College and Southeast Second Street and not admire its colorful facade. Built by Evansville dentist Charles Pittman and his wife Anna in 1889, this historic home is a stunning display of Victorian architecture in the Queen Anne style. Awash in vibrant blues, reds, and greens, the Painted Lady exterior compliments the color-drenched, old-growth hydrangeas that bloom around the home’s entrance. Its unique craftmanship, history, and proximity to the lively Haynie’s Corner Arts District are what drew Caeli and Dan Watzlavik to purchase the property in January 2021. “The woodworking is absolutely beautiful, and there’s just so much detaining in the mantles and around the fireplace and on the staircase,” says Caeli. The home is flush with expansive porches and a courtyard leading to a bright red carriage house. Caeli even maintains an Instagram account (@sesecondst) for the house, giving followers an inside glimpse. “This house has been around since the 1800s and is probably going to outlive us,” she says. “The fact that we get to play a part in its life and its history and preserve it is a cool thought.”

Why It Stands Out: Even through the lush greenery and treescape of the Plantation Estate neighborhood, Mike and Carol Hull’s stately Southern-meets-Colonial home stands out with a full-length porch and balcony on the front exterior. The flawless transition to nature — from the front doors on the ground level to the French doors upstairs — is what drew the Hulls to purchase the home in 2011. “I’ve always kind of been a pushover for a pretty home,” says Carol. “And then we loved the setting.” The property also hosts an attached two-and-a-half-car garage, a side deck, and a porch across the back of the house. In 2012, the Hulls renovated their kitchen but have largely let the Southern-inspired design speak for itself. “I love the Southern appeal of the front of the house,” says Carol. “It’s in a beautiful setting with trees around it and lots of dogwoods blooming right now. I’ve always thought it was one of the prettiest houses in town.” Imagine our surprise when we discovered the house of Carol’s son, Kyle Markle, also had made our 2022 “Most Beautiful Homes” list. Read more about Kyle’s Georgian East Side home next.

Why It Stands Out: Under a canopy of mature trees and surrounded by vibrant azaleas and cheerful dogwoods, the red brick Georgian ranch owned by Kyle and Abby Markle since 2017 occupies a stately perch on picturesque South Meadow Road. Built in the early 1960s as a family home for Dr. Thomas and Margaret Clark, the broad strokes of this home balance mid-century design with classic elements. “What first stood out to us was the unique and distinctive curb appeal. When we had the chance to view the house, we appreciated the quality of the craftsmanship and level of finishes,” Kyle says. A hidden second floor was added in 1974, and two woodburning fireplaces frame the first floor. Colonial Classics has planted the swath of cheerful landscaping adorning the front exterior. The couple have updated several rooms but do so with care. “We completely remodeled the kitchen and changed the layout. We’ve redone the bathrooms,” Kyle says. “We brought it into the 21st century but we want to maintain the history and style as much as we can.”

Why It Stands Out: In 2019, Amy and Josh Barron and their three daughters moved into a large Victorian-inspired home on four acres of natural landscape, complete with a man-made lake in the backyard. But the home wasn’t exactly new to the family: It was the same house Amy had lived in during high school, built custom for her parents, Connie and Ron Romain, by her uncle Bob Romain Jr. in 1990. “One daughter who is in my bedroom, it’s special to see her living in there and making it her own,” says Amy. “It’s definitely just the memories that the house holds for me, but then seeing us, as corny as it sounds, create new memories going forward.” A newer home built to resemble classic Victorian architecture with a wrap-around porch, intricate exterior woodwork, red-painted gable ends, and custom glass front doors, the Romains didn’t want to lose the house Bobby built when they decided to move, especially after his passing in 2013. Now, the Barrons are putting their own spin on family traditions in the same home. “We used to have holiday gatherings at my mom and dad’s house, and now my husband and I have taken those over, so it’s still in the same home, but we have different hosts,” says Amy.

Why It Stands Out: In 1986, the first house in the West Side’s Woodward Place neighborhood was built. Designed by the owners Charles and Christi Goodman and built by John Schaefer, the house is a classic example of Federal style with its trademark two-story base and symmetrical fixtures, such as the front entrance’s friendship stairs. “We’ve always loved Williamsburg style houses, and we considered either a Federal or Georgian style house,” says Charles. “We wanted it to look like an older house that’d been here quite a while.” The home was originally constructed with a two-and-a-half-car garage on the east side of the home, and a cathedral-ceiling sunroom, Christi’s favorite room, was added on the west in 2019 by Joe Stauber of Hoosier Home Improvement. The Goodmans wanted the home to be grounded in nature, from an abundance of natural light from the many windows to its meticulously manicured front lawn, in-ground pool, and formal back garden on the square, one-acre lot. “I’ve always said if we ever move to a warmer climate, I’d love to pick up our house and put it there with our yard because I’m so in love with our yard,” says Christi.

Why It Stands Out: When interior designer Marjorie Bergen and her husband Scott first visited in fall 2006 what is now their home in Audubon Terrace, they saw natural light, large rooms, and good space — all elements they desired in their next home. “We knew the space was good. It felt open without being an open plan,” she says. Apart from the kitchen, every room has been extensively remodeled. The couple installed new wood flooring, solid cherry built-ins, and a custom chimney. The exterior brick and siding were painted a soft cream, the solid wood front doors were replaced with contemporary glass, and Parker Ironworks repainted the geometric front gates. The result is a mid-century modern home that plays with blocks of color and light. Exuding a California contemporary cool, the couple refer to their home as a Rat Pack house and even have named their cats after singers Dean Martin and Sammy Davis Jr. “It’s a house that really shines at night,” Bergen says. “At night, she’s a party girl, and she likes to get dressed up.”