Over the last 10 years, the greater Evansville area has seen large bouts of growth — and as we head into a new decade, here’s a look at the new development our area is welcoming.

Jacobsville — On Oct. 30, 2019, Jacobsville welcomed developers from Home Investments as they announced renovations to the Buehler’s IGA lot into a mixed-used site. Plans call for 180 work force living units and additional commercial space. Construction is expected to begin in the spring of 2020.

In December, the city broke ground on the long-awaited Deaconess Aquatic Center across from Bosse Field. The facility will feature a competition 50-meter pool, a leisure pool, and an outside splash park.

Domo Development out of Carmel, Indiana, purchased the Fifth and Main Building in early 2019 and plans to convert it into a mixed-use tower, working with Hafer Architects to design retail and restaurant space on the bottom floor, a community space on the sixth floor with the open terrace roof, office space on floors seven and eight, and approximately 68 apartments on the remaining floors. 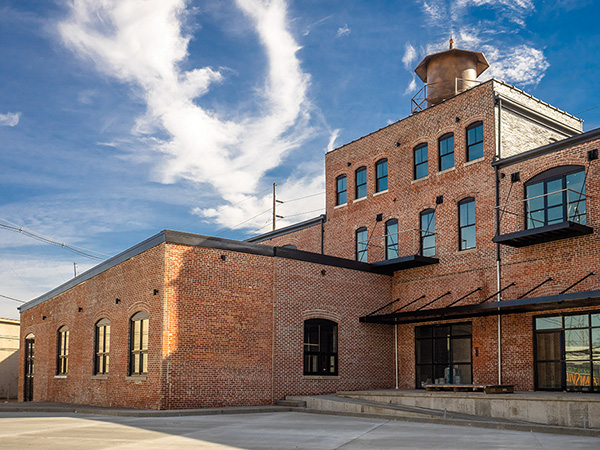 The National Biscuit Company building at 401 N.W. Second St. will have 23 modern one- and two-bedroom apartments. Downstairs, a restaurant managed by Randy Hobson of Pangea will feature a menu anchored by ramen dishes, and a bakery will have flavors from both French and Asian influences.
The LST 325 will have a new home beginning in April — the ship will occupy the waterfront across from Tropicana Evansville as part of a new visitors center project. Guests to the center can view displays of memorabilia in the center as well as purchase merchandise before exiting through a rear door to the ship.

Upgrades to the Evansville Water & Sewer Utility and Bee Slough continue into 2020 and are expected to be completed over the next several years. The project has created a new intersection to Waterworks Road off the parkway, as well as the future Sunrise Pump Station, featuring a cascade where clean water will flow into the Ohio River.

The 139-room Hyatt Place Hotel located at Second and Walnut streets is wrapping up construction — the grand opening of the Downtown hotel is expected later this year.

The former Welborn Hospital along Southeast Sixth Street is getting a new purpose in 2020 — new owners are working to convert the two-story, 100,000 square feet of former hospital space into a new tenant building called Welborn Plaza.

West Side — Visitors to Mesker Park Zoo and Botanic Garden are invited to explore the new Budgie Walkabout, where guests can wander the colorful birds’ enclosure and even feed the animals.
DKH Properties recently purchased the former Rajo’s Guns building next to Gerst Haus on Franklin Street. The company is planning a renovation of the building into a mixed-use property with three commercial spaces on the ground floor and six apartments upstairs.

East Side — Deaconess is constructing a new clinic along South Green River Road in front of the former Sears location in Washington Square Mall. Other developments that popped up along the South Green River Road corridor include Paul’s Pharmacy East, which moved from its storefront inside Washington Square into the renovated former Premiere Video in front of the mall.

North Side — The Evansville Regional Airport continues its efforts for upgrades and renovations. In September 2019, it started construction on a new eco-friendly, state-of-the-art solar covered parking canopy. The project is set to supply one-half of the terminal building’s power and will produce 1.3 megawatts of power.

The Newburgh Riverfront Amphitheater Complex broke ground along the town’s riverfront in February 2020. The project includes a stage, terraced concrete seating, and the incorporation of the Little Red Brick House, a historic structure that will be renovated and used for ticket sales and concessions.