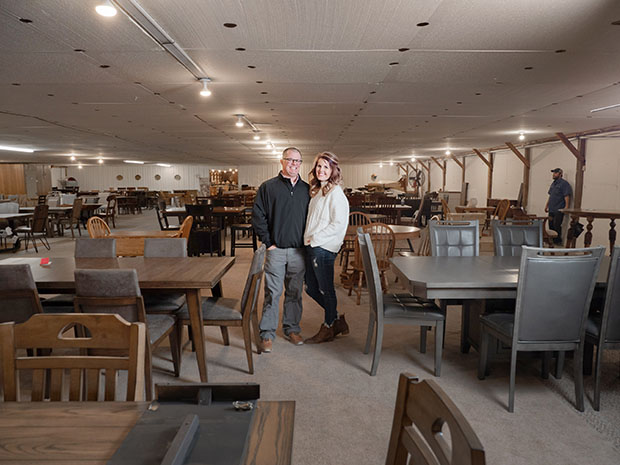 When taking a trip to Timberlake Furniture just southwest of Mount Carmel, Illinois, it’s important to remember to wear walking shoes. While many furniture stores — both locally and nationally — boast large selections, Timberlake’s is quite literally massive.

“We have at least 240,000 square feet here, spanning about eight football fields long,” says Timberlake owner Tyson Meador. “We usually have anywhere around 400 or more sofas on the floor at any given time.”

This family-owned furniture store has offered its uniquely large selection of pieces for all rooms of a home and more since 1982, when Roy and his wife Alma Timberlake moved back to his hometown of Keensburg, Illinois. Roy was not one to shy away from a business opportunity. Through the years, he’s also owned a carpet store, worked as a barber, and enjoyed time as an antique dealer (which he still does today in a building across the street from Timberlake).

Timberlake Furniture started as most small-town retail spaces do — a store with a select offering of pieces for local customers. But as the years went on, that selection began to grow and Roy and Alma decided to expand the store floor, adding one building to the next. Over 40 years, growing his inventory allowed Timberlake to house one of the largest furniture displays not only in the Tri-State but in the country.

Most furniture rooms have specific areas or rooms dedicated to parts of the home — Timberlake has buildings with wall-to-wall options. All the top-name brands associated with home furnishings can be found in the store’s collections for living rooms, bedrooms, dining rooms, office spaces, entertainment rooms, and even outdoors.

There’s a building dedicated to mattresses from twins and singles all the way up to California kings. Accent pieces including clocks, lamps, pillows, rugs, wall decor and more line out the spaces. And if, by chance, a customer can’t seem to find what they are looking for, Timberlake also offers custom ordering.

Growth is to be expected in a successful business. But how does a family-owned furniture shop near Mount Carmel turn into nearly eight-football fields of inventory pulling in millions of dollars in revenue? Easy — low overhead and wholesale prices.

“The message we want to convey to customers new and old is that we have some of the same stuff as other stores, but we can save you some money by driving over here,” says Tyson. Furniture was not Tyson’s trade before he and his wife Morgan took over Timberlake on Jan. 1, 2020. In fact, he previously worked as a sales representative for an international agriculture business for almost six years. A call one day from Roy — Morgan’s grandfather — brought him and his wife into the future of the store. At first, the discussion was about Tyson joining the staff to work for Roy. But as they continued talking, the idea changed to Tyson and Morgan becoming the next owners of the store.

For Morgan, the buildings that make up Timberlake are just as much home as her nearby childhood house. The Mount Carmel and Keensburg areas have always been home for the Meadors and their three children Shain, 12; Lola, 9; and Zed, 4 — and purchasing her grandfather’s store brought back many good memories for Morgan.

“I grew up in here. I’d play hide ‘n seek in here. Get into trouble,” she says. “When I was little, I delivered furniture with them at least two or three times a week. I was just always around here.”

Morgan was working as a teacher before she and Tyson took ownership of Timberlake Furniture, spending 10 years teaching first grade students and another three as an art teacher. Coming back to the furniture store not only brings Morgan back into her grandfather’s business, but it’s opening the opportunity for her to explore her love of interior design.

“Bringing in the decor accessories into the store is new and something I’m excited about,” she says. “I’ve always loved decorating and doing interior design things. I like to make things look pretty.”

Adding home accessories wasn’t the only change the Meadors brought with them. When the store exchanged hands and Tyson and Morgan officially took ownership, the couple put their own touch on the business while still providing the same customer service and low prices long-time visitors had been accustomed too.

“We’re just trying to modernize some things, offering modern furniture options, and trying to keep up with everyone’s style,” says Tyson. “We’re also getting ready to do some improvements, build a new front entrance and office space.” Tyson and Morgan also are looking beyond the immediate community surrounding Timberlake and hoping to reach more homes in the Tri-State. Many Evansville residents may have seen new billboards, print advertising, and TV commercials featuring the store. The couple also have introduced social media accounts and a new website — it’s all a part of an effort to reach customers who may have never visited or who may have never considered visiting Timberlake.

“There’s a whole host of people where their parents shopped here, but a lost generation that doesn’t know about us,” says Tyson. “Reaching out into the Evansville market is an effort to help us grow.”

And even though Timberlake is removed from the bigger cities, the effects of COVID-19 haven’t missed the store. During the quarantine orders, the store shut its doors for the entire month of April. Inventory may move off the floor quickly, but with shipping issues and shortages, it takes much longer to replace. And custom orders went from being six to eight weeks out to 15 to 20 weeks.

“Who knew 2020 would throw us this many curveballs. We were open and doing good, starting to figure things out. Then we closed for April and opened back up in May. It’s been a hell of a ride,” says Tyson. “The COVID attitude has changed some things, but we just are doing what has always been done — giving people a fair price and a good customer experience.”

“It’s fun working with people,” he adds. “We’re trying to work as a team and make our employees feel a part of a team here. We’ve got some good people here and we value them. We hope to add more and keep growing.” Walk in the store today, and you may see the couple’s youngest son, four-year-old Zed, following in the footsteps of his mother, trailing after his parents and Timberlake employees around the store, playing hide ‘n seek and filling the buildings with laughter. Many customers are known to the staff and Meadors and are greeted by first name. But even if a customer is new, they are treated with warm smiles and inquiries on what they need. Throughout the maze of buildings and furniture, there’s lively chat between employees and customers and even new furniture being placed out for display. There’s an overall sense of community and small-town values, even in a place as big as eight football fields.

“We want to build a business and continue the business that Morgan’s grandparents started that will last more than just our generation,” says Tyson. “We would like to have a business that one of our kids may want down the road; make it successful enough that it keeps getting passed down.”