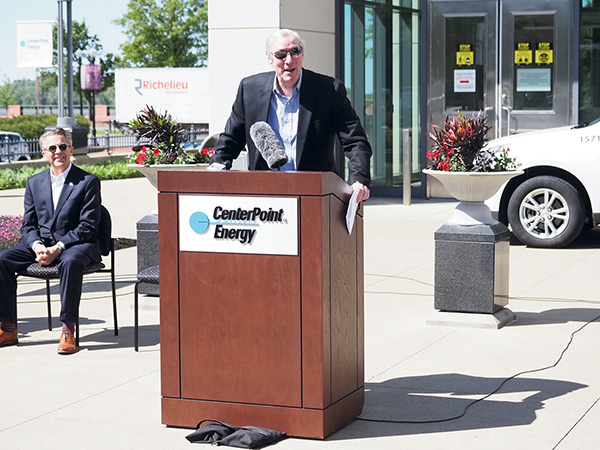 The transition to CenterPoint Energy is officially complete, coming more than a year after the Texas utility corporation bought out Evansville-based Vectren in a $6 billion merger finalized in February 2019.

“It had a great name, but we also have a really great name at CenterPoint,” says Dave Lesar, president and CEO of CenterPoint Energy. “What isn’t going to change is our commitment to Evansville.”

The completed transition includes updates to customer bills, websites, social media, and mobile app branding, while further unifying the company as it delivers energy to millions of customers across middle America.

Signage at CenterPoint Energy properties, including corporate and field office buildings, as well as electric and natural gas facilities throughout both Indiana and Ohio, have been updated. Employees working in the field are now wearing uniforms and driving trucks with the new logo.

Along with the official announcement of the transition to CenterPoint Energy, the corporation donated $1 million to a new city park planned for the space between the Sycamore building and the nearby 18-story Fifth and Main Street building, both of which will be demolished and rebuilt as new developments.

“The commitment to our community is impressive. In 2016, you may remember that we updated the Downtown master plan. One of the key points was that people wanted a more activated Main Street, especially in this location,” says Mayor Lloyd Winnecke. “We feel very confident that these projects will happen, and they’re happening because we have great cooperation and collaboration.”