On the Right Path

Ben Trockman doesn’t believe things happen for a reason. The 26-year-old Evansville native says life happens; what’s important is what you choose to do after the unthinkable occurs.

The Harrison High School graduate knows firsthand about life’s curveballs. Trockman was 17 years old in 2006 and on track to attend college at Indiana University in Bloomington, Indiana. At the time, motocross racing was a hobby Trockman shared with his father, Vanderburgh Superior Court Judge Wayne Trockman, and younger brother Josh. In March 2006, the two brothers were competing in a race in Poole, Kentucky, when Trockman was involved in an accident and suffered a severe spinal cord injury that left him paralyzed from the neck down.

Today, Trockman relies on a motorized, high-tech chair (operated with the “sip-and-puff” method, where Trockman uses a straw to move his chair) to get around and on the help of others to navigate through his day.

“I really think that this injury and having to count on people — nurses, therapists, doctors, friends, and family — has really made me grow up,” says Trockman. “I think I’ve learned how important it is to give back and to help other people when you can.

“And not only is it important, but I’m really passionate about being a part of it,” he says. 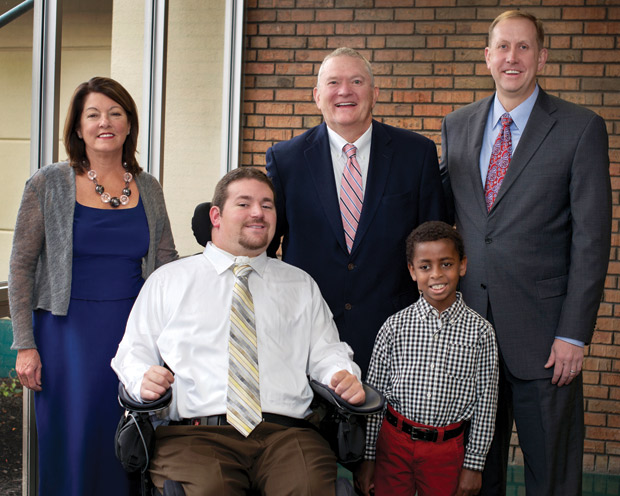 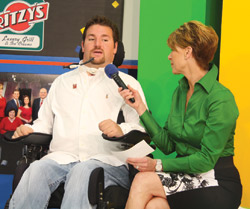 Trockman’s resume shows that passion. In 2010, while attending the University of Southern Indiana, he was named the adult representative for Easter Seals Rehabilitation Center in Evansville — a one-year honor and commitment. Two years later he was asked to be the National Ambassador for the nonprofit. Though he originally dreamed to work in sports management, handling public relations or communications for a team, the years spent with Easter Seals opened his eyes to what he truly wanted to do with his life.

“Because I had the opportunity to travel all across the country to speak about disability, to meet people with disabilities, I noticed the impact that Easter Seals and I could have just by being able to speak and spread the mission,” he says.

Easter Seals Director of Marketing & Community Relations Pam Kirk says she always was impressed with Ben’s positive outlook during his time as an ambassador for the nonprofit organization. His continued involvement with Easter Seals has been just as invaluable, she adds.

“Yes, Ben’s giving people a better understanding of the unique issues faced by our friends and neighbors who happen to have disabling conditions,” she says. “But just as important, he’s encouraging us to look beyond our expectations. He’s helping us realize that we’re all more alike than different.”

As he neared graduation from USI, Trockman says he wasn’t sure where his life was headed. Majoring in public relations and advertising, it was a conversation with his father two weeks before graduation that spurred his next move. With support from his family, Trockman says he decided to email five different CEOs within Evansville, asking to meet.

One of those emails led to a conversation with the CEO of Old National Bank Bob Jones. What Trockman wasn’t expecting after his meeting with Jones was to hear from ONB’s Talent Acquisition Manager and Senior Vice President Ron Hagy, who wanted to have a chat with the soon-to-be USI graduate.

“After about two hours of a lunch that was supposed to only be about half an hour to an hour, we found common ground in having the desire to help people with disabilities,” says Trockman.

A month after that lunch, Hagy contacted him again, this time with a job opportunity. Hagy says the meeting with Trockman was at the perfect time.

“We created the Community Outreach and Employment specialist role because we needed to move forward faster than we were with a plan in place,” he says. “We have had a focused commitment for many years and are working with individuals with disabilities. It just wasn’t happening at the rate and in the way we all wanted things to.”

Since coming on board, Hagy says Trockman’s presence, his ability to present ideas, and his critical thinking inspires everyone in the company. Trockman is helping change minds at not only Old National, but in the community as well, Hagy adds, and the reputation he has is very valuable.

“He allows us to see the confidence of people with disabilities, so his mere presence is so important,” he says.

Trockman says working for a bank is the last place he thought he would be, but the opportunity was one too big to pass up. The fact he gets to combine his passions of helping those with disabilities find employment and bettering the Evansville community sealed the deal for Trockman when he was offered the job. 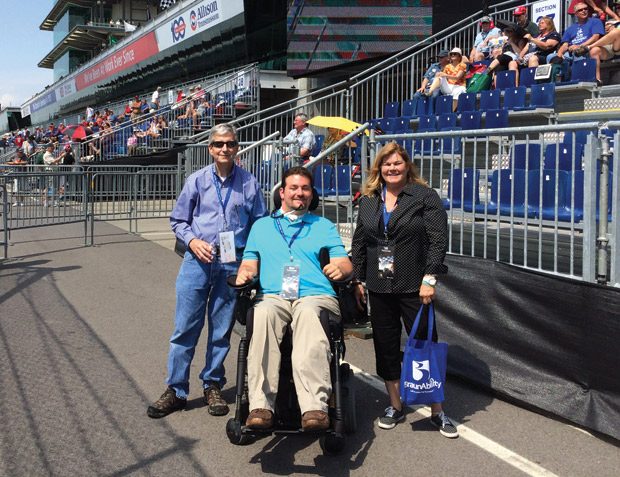 ▲ In May 2015, Trockman was awarded the Ralph Braun Foundation Spirit Ability award, presented by former Indy Racing driver Sam Schmidt. Schmidt also is a quadriplegic who suffered an injury after an accident in 2000 at the Walt Disney World Speedway. During the presentation, the former driver said Trockman’s work to help those with disabilities find employment is why he’s a perfect recipient of the award. As part of receiving the honor, Trockman and his parents, Wayne and Jill Trockman, traveled to Indianapolis Motor Speedway one week before the historic Indianapolis 500 race. Right, others with disabilities joined Trockman during Schmidt’s “Day at the Races,” which is an initiative sponsored by BraunAbility and the Sam Schmidt Paralysis Foundation. Those attending were given VIP access where they received a behind-the-scenes tour of the car garages and pit areas, met the drivers, and watched qualification runs and actual races. 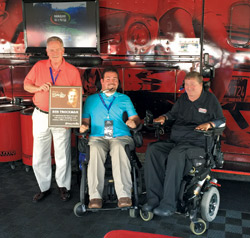 “We’re trying to figure out here at Old National ways to not only bring in these talented workers who have disabilities, but also change the mindset from the top down,” says Trockman. “We believe that you can’t push these initiatives from the bottom floor. We’ve got to expose our leaders to these different situations.”

Eleven months after accepting the job, Trockman says he and Hagy have worked on exciting projects that have consumed his life in an extraordinary way. One of the projects he has begun to implement since taking his position with Old National is the Achieve ABILITY program. Centered on the idea of educating the public about disability employment, it is a mentoring program that not only gives those with disabilities a chance to make connections with executives in their community, but also exposes executives to a learning opportunity as well.

“I had the opportunity to easily send out emails to five CEOs within Evansville. I don’t take that for granted,” says Trockman. “But a lot of people with disabilities can’t do that. So starting this mentoring program gives those individuals a chance within our community.”

The time with Easter Seals also exposed Trockman to more of the issues those with disabilities face, which he would like to help change. While serving as national ambassador, he experienced firsthand the difficulties of traveling long distance and the limited options to him.

“This was when I was exposed to the whole airline issue and realized that I had to do something about it,” he says.

For Trockman and others who rely on specialized equipment, airline regulations hamper their ability to use the mode of transportation. To travel by plane, Trockman must be physically lifted from his chair and placed in an airline chair. His customized wheelchair would then have to be stored under the plane. Though the process seems simple, he points out many things could go wrong.

“Let’s just say I’m going to San Diego and I’m flying from Evansville to Chicago, and as I get to Chicago and want to get back in my chair, something is broken,” he explains. “What am I supposed to do? How am I going to get to the next gate, the next terminal? Maybe I have a pressure sore. There’s just so many things that could go wrong that it just scares me. Therefore, I haven’t flown since my injury.”

This led Trockman to attempt to start a change; he created a petition which gathered 8,000 signatures. He then traveled to Indianapolis where a proposed nonbinding resolution was passed in the Indiana House and Senate in favor of making air travel more accessible for those with disabilities. 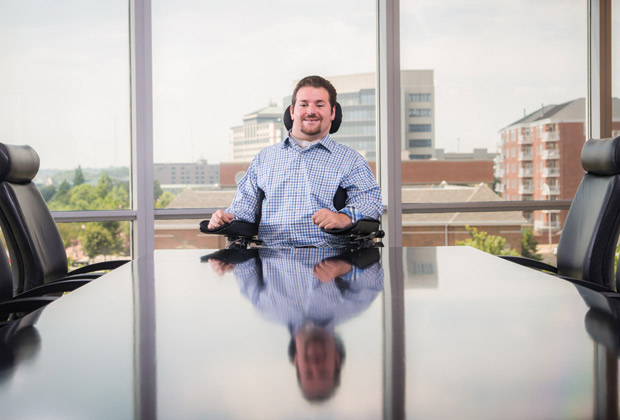 Trockman explains when the Americans with Disabilities Act was signed in 1990 (the ADA celebrates its 25th anniversary this year), it dictated that businesses and modes of public transportation — excluding airlines — had to make changes to help accommodate individuals with disabilities. Through the Air Carrier Access Act of 1986, airlines are not allowed to discriminate against people with disabilities, but they do not have to be accessible.

Though the issue has not been resolved, Trockman remains optimistic about the effort. “It’s going to take some time, you know, but … if we keep talking about it, I think it’s important. It’s definitely not going to happen tomorrow,” he says.

In all his endeavors, Trockman stays realistic, yet optimistic. He works through any obstacle that comes his way with determination and a will to try to make things at least a little better than they were before.

“It’s more than just about me; it’s exactly what I want to do, so being offered this position here, that just makes sense,” says Trockman. “I’m not going to run to a sports organization yet. But maybe in five years from now. We’ve got a lot of work to do here first.”