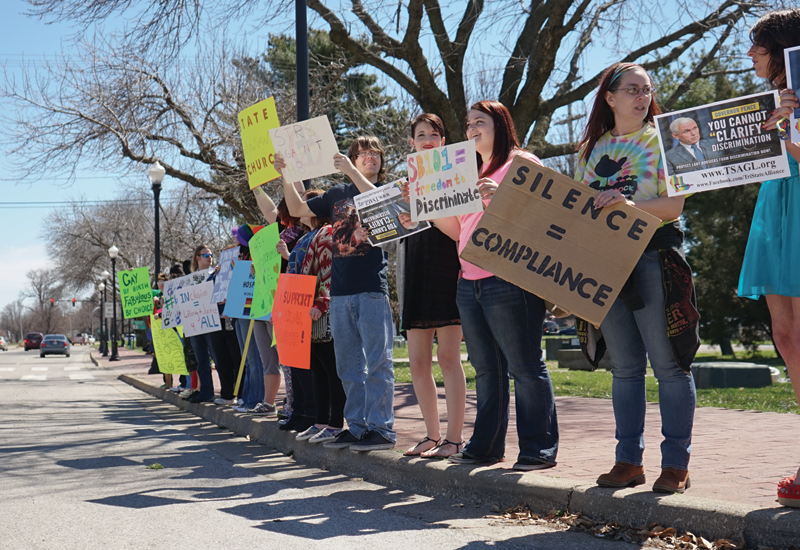 Residents gathered during the end of March at the Four Freedoms Monument in Downtown Evansville to peacefully protest the passing of Indiana Senate Bill 101, or the Religious Freedom Restoration Act.

Gov. Mike Pence signed the bill in late March and criticism mounted immediately. The bill prevents government entities from forcing an individual to violate his/her religious beliefs unless there is a compelling reason. Essentially, Hoosiers can use religion as a defense in a court of law; that court of law, though, has no obligation to uphold that defense. Many say it opens up the door for discrimination against the LGBT community as a business can refuse serving individuals based on sexual orientation.

In response, the governors of two states called for travel boycotts, the heads of international businesses spoke out, organizations with plans for conventions publicly promised to reconsider, and nearly all major league sports organizations said they would be watching Indiana (NCAA is headquartered in Indianapolis).

Evansville Mayor Lloyd Winnecke published a response on his Facebook page: “We must continue to be a community of hospitality, warmth, and with a desire to treat everyone with respect.”

At the protest, around 100 individuals gathered with signs and rainbow flags before marching down Riverside Drive. Evansville mayoral candidate Gail Riecken joined protest organizer Max Hedon of Evansville in denouncing the bill.

Many businesses have purchased stickers from openforservice.org to show they open their doors for everyone. At press time, an admendment to the bill was awaiting approval. Tucker Publishing Group opposes the law and urges its repeal.