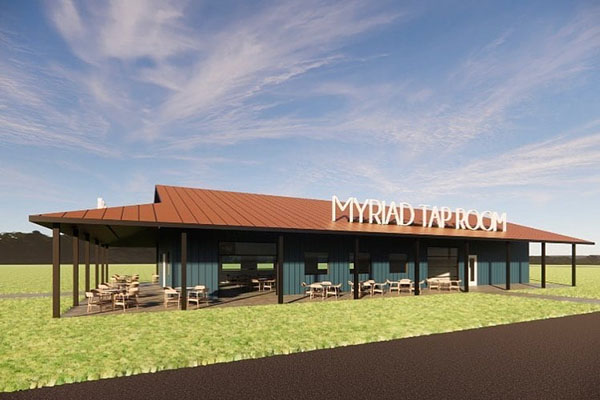 It’s a new year, and that means new restaurants and bars are breaking into the Evansville dining scene. While many original eateries will be brand new in 2022, Evansville Living selected its three familiar names with future projects.

Myriad’s Taphouse
In June 2021, Myriad Brewing Company teased a new project with a Facebook post of a lush, grassy field. By December, the popular craft brewery known for hosting food trucks and block party events at its location at 101 S.E. First St. in Downtown had announced the field at 8245 High Pointe Drive in Newburgh, Indiana, would be the site of its second location, the Myriad Tap Room. The new building will include a tap room and a separate coffee house with some overlapping hours and space for guests under 21 years old, and is currently undergoing construction.
myriadbrewing.com

Honey Moon Coffee Co.
Two locations (612 Weinbach Ave. and 1211 Tutor Lane, Ste. E2) and a reputation for sweet or savory bubble waffles have spurred owners Zac and Jessica Parsons to stretch their reach in the new year. On New Year’s Eve, the husband-and-wife duo took to Facebook to announce their purchase of Ben and Penny’s Ice Cream Shop (20 W. Water St.) in Newburgh, Indiana. The riverside location will be converted sometime in April or May into Honey Moon Newburgh and will offer its popular coffee and treats, as well as ice cream. Zac says they want to “continue the legacy of having ice cream on the riverfront.” If the new menu items are successful, the couple will consider adding it to their two existing locations. If ice cream and coffee weren’t enough to get the community excited, the location will also feature a second-floor Airbnb with a small living space, kitchenette, and a river view.
honeymooncoffee.co/

Ghost Quesadilla
Ryan London is a name to know if you’re a fan of Mexican food or Southwest flavors in Evansville. The owner of Ghost Quesdilla and Ghost Sports Bar next to each other at 4222 Bell Road, London’s next dining venture is Ghost Quesadilla’s second location on the West Side. By November, the restaurant was built at 5501 Pearl Dr. and was scheduled for inspections. As of Jan. 5, this location isn’t open yet, but the staff of Evansville Living is looking forward to more of Ghost Quesadilla’s burritos, tacos, and quesadillas.
ghostquesadilla.com