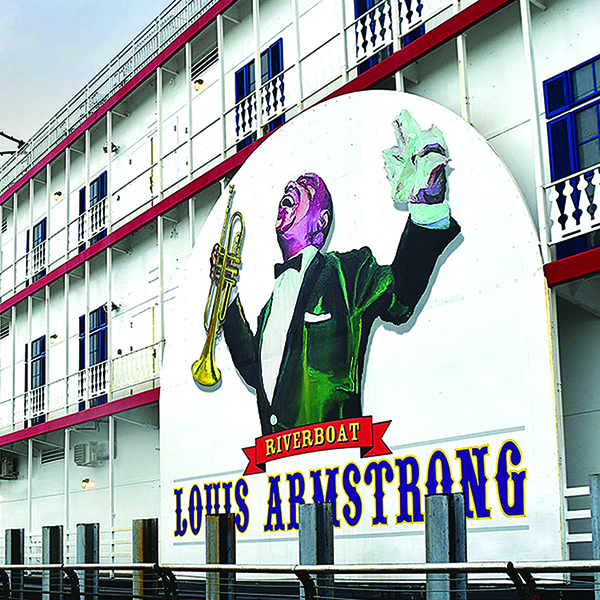 Where the LST-325 docks along Evansville’s riverfront, a riverboat named The City of Evansville took harbor on the Ohio River from 1995 to 2017 and held the title of Indiana’s first casino. Now called Riverboat Louis Armstrong and docked in New Orleans, Louisiana, the vessel is the largest boat and event space in the city.

The riverboat was Tropicana casino’s riverboat (and before that, Casino Aztar’s) until 2017, when Tropicana opened the state’s first land-based casino (now Bally’s Casino). Hospitality Enterprises New Orleans/BigEasy.com then purchased and renovated the 3,000-passenger boat.

“We worked with some great people at the casino,” says Captain Paul Keller, who started on the boat as a deckhand in 1997 and has been its captain since 2012. “It was definitely bittersweet leaving there after so many years.”

Modeled after the Robert E. Lee steamboat built in New Albany, Indiana in 1866, Keller says the boat would be unrecognizable to Evansville visitors. More than 900 gaming machines were removed, and the interior was completely gutted. It received new electrical, audio, and safety systems; a 30-foot-by-30-foot logo of Louis Armstrong on each exterior side; and an array of meeting spaces, a concert hall and stage, three bars, a wedding space, and a banquet hall.

“It’s a whole new ballgame,” says Keller, a Peoria, Illinois, native. “As far as the river goes and moving the boat, the current’s swifter. There’s a lot more traffic. There have been some challenges and a big learning curve for sure, but it’s pretty exciting.”