A tense overtime game on Sunday, Jan. 20 in New Orleans saw the Los Angeles Rams defeat the home team Saints by only a three-point margin. The victory not only nabbed the NFC Championship for the West Coast team, but also secured them a spot in the sport’s most coveted game — Super Bowl LIII.

Many locals may find themselves rooting for the Rams against the New England Patriots on Feb. 3 for various reasons — but the Fuchs family will cheer for Los Angeles due to family ties.

Sean McVay, the now 33-year-old head coach of the Rams (McVay just turned 33 on Jan. 24), has deep Evansville ties. His mother Cindy is the daughter of Kay Fuchs and the sister of Link Graphics owner Bob Fuchs.

“We’ve become rabid fans since Sean started coaching the Rams,” says Bob. “We are very excited to see them advance to the Super Bowl.”

Sean became the youngest head coach in the league when he was hired on to the Rams in 2017. Football runs deep in his family — his father Tim was a defensive back for Indiana University football and his grandfather John McVay is a former general manager of the San Francisco 49ers. In high school, Sean was a starting quarterback and would go on to play as a wide receiver at Miami University in Oxford, Ohio.

At the beginning of the 2018 season, Sean and the Rams started the year with eight wins and zero losses (the team’s best season start since 1969). Sean led his team to a 13-3 record for the regular season, tying the Rams for the second-most wins in franchise history.

The win last Saturday against the Saints sends Sean and the Rams to the team’s first Super Bowl appearance since 2001 (when the team was located in St. Louis).

As for the Fuchs’ and their plans to cheer on Sean on Feb. 3?

“We will be there (in Atlanta) with all our Rams’ gear and regalia,” says Bob. 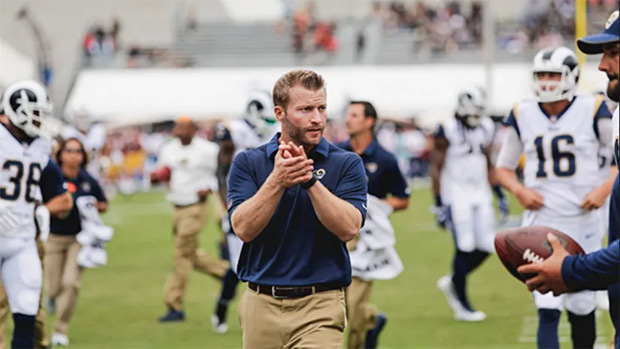