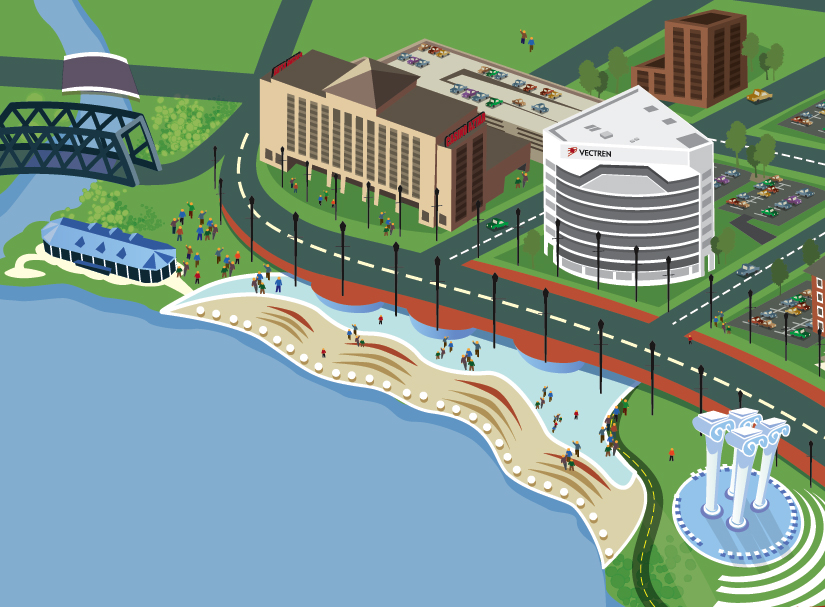 In 1986, Robert Matthews, then executive director of the Center City Corp. (a predecessor to the Growth Alliance for Greater Evansville), published an editorial in the Evansville Press that encouraged Evansvillians to “put our dreaming caps on and look at our riverfront, keeping in mind that dreams can become reality if our attitude is positive.” His lofty visions — a mini-state park! An airstrip for ultralight planes! A steamboat museum! — may not have materialized, but his creative approach to riverfront development was exactly what transformed Dress Plaza.

Constructed in 1936 and named for two-term mayor William Dress, Dress Plaza was the subject of numerous proposed makeovers. In 1963, the Chamber of Commerce expressed a desire to beautify the elevated portion of the plaza; in a letter urging the group to take action, one local business leader wrote that the “drab wall … will be a depressing thing unless something is done about it.” Another Evansvillian proposed painting a mural of historic River City scenes on the lower retaining wall.

In the mid-1960s, a local “beautification committee” pondered where to put four 10-ton, 28-foot concrete columns (sound familiar?) that previously had adorned a community center at Eighth and Main streets. Those columns became the Four Freedoms Monument in 1976, but the finishing touches weren’t immediately completed. Passersby complained that the 50 unmarked stones surrounding the Four Freedoms Monument — now emblazoned with state seals — made the area resemble an unmarked graveyard.

Development in the plaza area surged again in the mid-1990s when Casino Aztar came to town, eventually bringing numerous restaurants and two hotels. In 2002, a $10 million renovation of Dress Plaza provided event seating and an attractive, updated esplanade.