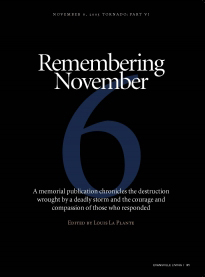 In early October, a group of survivors and family members of victims of the Nov. 6, 2005, tornado approached Tucker Publishing Group, the publishers of Evansville Living, about creating a memorial publication for the anniversary of the disaster. Members of the group had collected the first-hand accounts of survivors and rescue workers and tributes paid to the 25 victims of the tornado. Through photographs, they also chronicled much of the damage done by the storm and the recovery work that followed. The result of their efforts was a 64-page account called Remembering November 6.

Tucker Publishing Group donated its time, and the cost of printing was underwritten by a grant from the Bower-Suhrheinrich Foundation, managed by Fifth Third Bank Investment Advisers. All proceeds benefited area fire and rescue departments, whose members turned out in full when the tornado struck.

The following are excerpts from Remembering November 6. They are a portion of the voices that tell a story of the death and destruction wrought by the storm and the courage and compassion of those who responded.[pagebreak]

I was working in the emergency room at St. Mary’s Medical Center when the tornado hit. I wasn’t going to go into work that night, but at the last minute, I decided I needed to go. It was such a warm November night. The last time I saw my husband, Bill, was when he walked me to my car, as he always did, and told me two things: that he loved me, and that he would have coffee ready for me when I got home. I called him when I got to work, as I always do, to let him know I had made it in safely. Four hours later, my whole world collapsed. We were told a tornado had hit, and that we needed to be prepared for mass casualties. I was unaware I had my own casualty, because I didn’t know the tornado had hit the Eastbrook Mobile Home Park, where we lived. When I finally learned the location, I rushed to the phone to call Bill. Not knowing he was already gone, I still continued to help other people. I didn’t find out about Bill until the next day, when the coroner’s office called.
– Nancy Skaller, an environmental services aide at St. Mary’s Medical Center. Her husband, Bill, was one of the 25 victims of the tornado.[pagebreak]

The loss of a child is the most difficult experience I have had and hope to ever have in my life … Since that moment, there has been an immeasurable void in my heart, as well as my husband’s, that we have been slowly trying to fill with pleasurable memories of C.J. Our three surviving children have dealt with the loss of their brother brilliantly as resiliency is a quality that has been bestowed upon them since birth. I have had a difficult time with the nightmares that require me to relive the tragedy every time I close my eyes. The smell of gas, the screams from those who used to be my neighbors, the darkness, and the sirens were all the sights and sounds of Nov. 6, 2005. The fear of not finding my baby and having to tell other injured individuals that I could not stay with them because I had to find my son will forever haunt me.
– An excerpt from a letter to Indiana Gov. Mitch Daniels, written by Kathryn Martin, whose 2-year-old son, C.J., was killed by the tornado, along with his grandmother and great-grandmother.[pagebreak]

We quickly woke my grandchildren … We had to get the kids to safety. It must have been 1:58 a.m. by the time we had all gotten in the car. We passed (my daughter) Brandi on the road. She turned around quickly to follow us. We made it to the stop sign, and I heard (my husband) Billy say, “Oh no!” I heard wind hit the windshield and get sucked into the car. The car was picked up, turned, and sat back down. Debris was flying. There was silence. The windshield exploded in my face. I knew I was hurt, but I realized I must be alive. I felt something dripping and thought it was blood, but it was rain on my face. I didn’t even know it was raining. I hadn’t heard the train-like sound of a tornado. I thought we must have been in a wreck. I looked at Billy, who was turned over the seat to brace for impact. His arms were over the top of the kids to protect them, and his legs were crossed holding what was left of the windshield from falling in. I shake to this day when I talk about that night. This truly changed all of our lives.
– By Judy Gish, recalling her family’s exodus from their home in the Eastbrook Mobile Home Park.[pagebreak]

I had had two hip replacements, so Tom told me to stay with the kids while he went to help our neighbors. I told him to send anyone who needed shelter to our house. For a while, I had four children, a dog, and a lady who lost her home who had some minor cuts and bumps. It got hot in the house, so I opened the front door to let some air in. Helicopters were flying around with searchlights, people were calling for help, and you could hear moaning. My grandchildren started to get more upset, so I closed the door. All I could do was pray … Things are getting better now, but they’ll never be the same. Every time we go out or into the mobile home court, I still see all the families in my mind who used to be there: children riding bikes, the elderly lady on the corner working on her plants, the people who walked their dogs. Did they survive, or are they gone? I didn’t even know their names but knew their faces.
– By Betty Richardson, a resident of Eastbrook Mobile Home Park. Richardson’s family survived the tornado with minor injuries.[pagebreak]

Our crew started to search for more victims, moving from pile to pile of debris. As we searched, I began to feel overwhelmed as to which pile to search next. I came across several things in the search that were enough to make a strong man weak. One was a baby doll, lying on the ground as if it were placed by the precious little pair of hands that held and loved it. Please let her be OK, I thought. The smell of perfume seemed to be in every pile we searched. There was a clock hanging on what was left of a wall. Its pendulum was swinging and keeping perfect time. How could that be? In my mind, time had stopped … As the sun lifted over the trees, that’s when I saw for the first time how massive the damage was. I stood there, fighting back the tears, looking over the debris field, thinking about what we were going to find as the day went on. How many unsuspecting victims did this thing claim? At that time, the truck carrying the bodies drove right in front of me. I literally became sick to my stomach.

There was not a lot of talk on the ride back to the fire station. All I could think about was taking a shower — as if it would wash my memory clean of what I had just seen. I got in my car and headed home. Then, it hit; I cried for the whole day. I could not stop thinking about the victims.
– An excerpt from an account of the disaster scene, written by Keith Meyer, a 15-year veteran of the Evansville Fire Department. Meyer died two months after the tornado, and his partner found the account on Meyer’s computer.[pagebreak]

I carried the body of one of the children out. For a moment in time, that was my child — a child who will forever be a part of me. Each body we found made it harder and harder to deal with emotionally. I do not believe any of those we found suffered, but closure? There will not be closure for me. I’ll never forget this! Almost one year later, I still think about this everyday. My wife still has nightmares. We will see or hear something that triggers all the memories of that day again.

We don’t do this work as volunteer firefighters for recognition. For us, it is a calling. My wife, our children, our fathers, our brothers, and more come from a whole history of firefighters. It is in our blood. Because of this horrible tragedy, my wife decided to join our volunteer fire department. For myself, I have a whole new respect for storms. I cherish the time with my family more and respect the fact that life is precious and can be taken away at any moment. My personal thought, that God has many angels and decided he needed a few more that morning, stays with me. I will keep the memory of this one child in my heart for the rest of my life, knowing and hoping that someday he will ease the pain that is eating me up inside, so I can continue helping others, especially the children.
– By Tim Yochum, chief of the Steen Township Volunteer Fire Department in Knox County, Ind., who was among the hundreds of rescue workers who responded to the disaster scene at Eastbrook Mobile Home Park.[pagebreak]

On the fifth anniversary of the 9/11 terrorist attack on the World Trade Center, 20 New York City firefighters traveled to Degonia Springs, Ind., with a group of other grateful American citizens from around the nation to help rebuild Baker’s Chapel, a small church with a vibrant congregation that was nearly destroyed by the Nov. 6, 2005, tornado. The New York City firefighters intentionally chose the anniversary, knowing they needed to do something uplifting during what is the most difficult time of the year for them … Imagine 500 people standing in a Southwest Indiana cornfield, holding hands, singing the lyrics to “Proud to be an American” in front of a 14,000-square-foot church that they had framed in two days. But it was so much more than that. Those who took part in the effort to rebuild Baker’s Chapel were able to give a moment of hope to the many families who lost their homes or their loved ones to the tornado. It has been an honor to work alongside all of these people. Baker’s Chapel, founded 160 years ago and rebuilt in the spirit of gratitude, will serve as a lasting legacy to the kindness and humanity our nation experienced after 9/11.
– By Jeff Parness, founder of the New York Says Thank You Foundation, and participant in the September 2006 rebuilding of Baker’s Chapel.

Honoring Juneteenth in the Tri-State