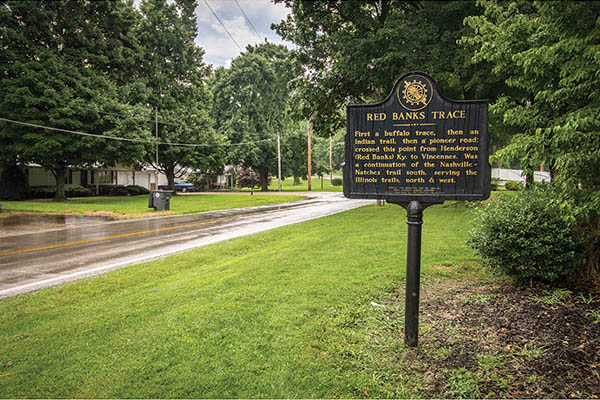 Many roads wind through the more than 260 square miles of Vanderburgh County, but these well-traveled paths have seen changes through the decades. At one time, roads were more often than not paths where animals crossed, then they became Native American trails, and later pioneer trails. The oldest path, trail, or road in Evansville is said to be Red Bank Road.

Located on Evansville’s West Side, Red Bank Road used to be known as Red Bank’s Trace. Vanderburgh County historian Stan Schmitt says the road ran north from Henderson, Kentucky, to Vincennes, Indiana. Since then, the road has shifted its path.

“After Evansville became a part of the county, they kept shifting that road farther and farther east,” says Schmitt. “Later on, the road shifts again and becomes the road to Evansville to Princeton to Vincennes.”

According to “Early Indiana Trails and Surveys” by George R. Wilson (published in 1919), Red Bank Road gets its name from the area left of the river bend, which used to be referred to as “Red Banks Trail.” To mark the importance of this trail, a historical marker sits on Red Bank Road just south of Indiana 62 to commemorate the original path.

The historical marker reads, “First a buffalo trace then an Indian Trail, then a pioneer road, crossed this point from Henderson (Red Banks), KY, to Vincennes was a continuation of the Nashville- Natchez trail south, serving the Illinois trails, north and west.”