It’s often said that breakfast is the most important meal of the day. With a bounty of diners, cafés, and restaurants in Evansville, it’s hard to pick just one place to visit for some early-morning fuel. Here’s a list of desired deals, hopping hotspots, and homey hole-in-the-walls that offer the best breakfast in town.

When regulars visit the Cross-Eyed Cricket at 2101 Pennsylvania St., they come for the Big Dan, which is $10.99. Though it sounds like a large, husky man, the Big Dan actually is a breakfast dish consisting of three eggs, served the way you like them, bacon, ham, and sausage, American fries or hash browns, and toast or biscuits and gravy. Owner and manager Fernando Tudela says the Big Dan is so popular because “it’s a taste of everything as far as meat is concerned.” What sets it apart from everyone else’s is the bacon. “We get nine to 10 pieces of bacon per pound,” says Tudela. “Most of the other places are getting 18 to 22 pieces.” As far as where the name “Big Dan,” came from, Tudela says it was named after a customer who still frequents the restaurant and orders that array of breakfast foods. A cheaper option would be Pick 5 for $7.99, which offers many of the options featured in Big Dan.
2101 Pennsylvania St., 812-422-6464, Find the Cross-Eyed Cricket on Facebook 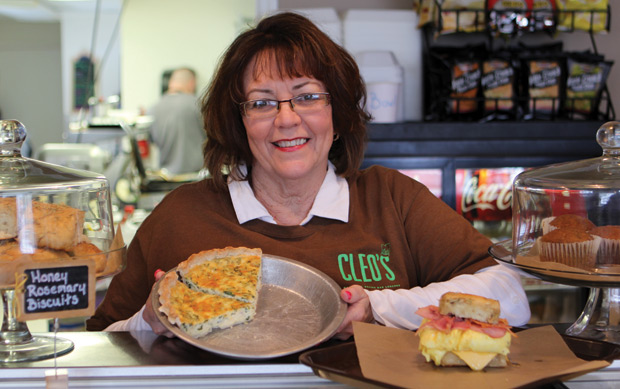 In the three years since Cleo’s Bakery’s inception, the restaurant has earned a strong local following of consistent regulars. These Cleo’s loyalists continue to visit the restaurant and its owner Jeannie Kellams for delicious and unique breakfast dishes. “Our most popular breakfast is probably a tie between the breakfast burrito and the quiche,” says Kellams. “It’s different from what you’d expect to eat for breakfast, it’s not your average bacon and eggs.” At Cleo’s, you always can order a cheese quiche or one of the restaurant’s original quiche of the day. Their French toast and breakfast sandwiches made with homemade biscuits also are a hit.
9 W. Jennings St., Newburgh, IN, 812-853-0500, cleosbakerynewburgh.com 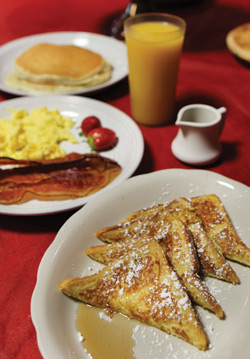 Customers of The Pie Pan can kickstart their day with the Kickoff breakfast. This hearty meal includes a drink, two eggs, two pancakes or slices of French toast, sausage or bacon, and has been a staple on The Pie Pan’s menu for more than 10 years. If the Kickoff doesn’t quite satisfy your daybreak munchies, The Pie Pan offers a full breakfast menu that includes vegetarian options, children’s menu, classic dishes, cereals, specialty breads, and, of course pie. “Our pies are made right here with lots of TLC — tender, love and care,” says Libby Lear, Pie Pan owner of 31 years. Want a slice of pie with your breakfast? Try the Country Apple with shredded cheese on top.
905 N. Park Drive, 812-425-2261, thepiepan.net 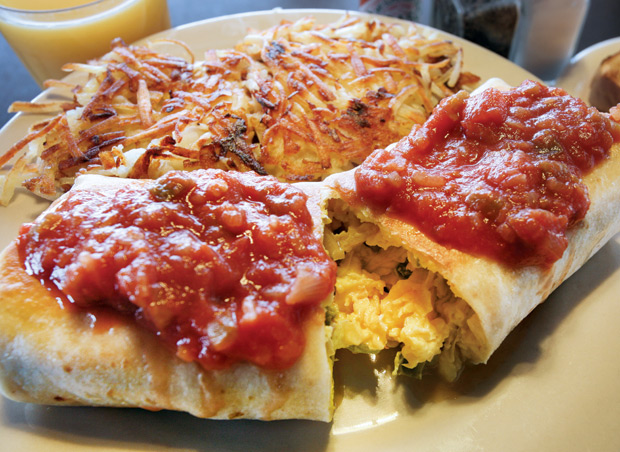 Regulars of Cleavers Chicago Style Flavor love their Mile High Burrito — a four-egg burrito filled with the customers’ choice of sausage or bacon along with green pepper, onions, and a side of salsa and hash browns. “We have two other dishes that have very similar ingredients that are all as popular as the Mile High and I think it’s the combination of the green pepper and the onion,” says Christy Lamar, a Cleavers waitress of four years. Customers can get their Mile High fix, along with the rest of the breakfast menu, everyday from 7 a.m. to 11 a.m.
5501 E. Indiana St., 812-473-0001, Find Cleavers on Facebook

Merry-Go-Round, a staple since it opened on old Highway 41 in 1948, is busiest during breakfast hours for two reasons: cheap eats and excellent service. “We have the fastest service in town,” says Nicole Brackett, a waitress in her seventh year at the restaurant. “Everybody that comes in has a great relationship with the staff. It’s like a huge family here.” That family’s go-to breakfast order? Merry-Go-Round’s Breakfast Special. For $4.27, customers get two eggs cooked to order, their choice of bacon or sausage, and their choice of pancakes, toast, or biscuits. With free coffee on Wednesdays and Thursdays, Merry-Go-Round aims to keep its family coming back for more.
2101 N. Fares Ave., 812-423-6388, Find the Merry-Go-Round on Facebook 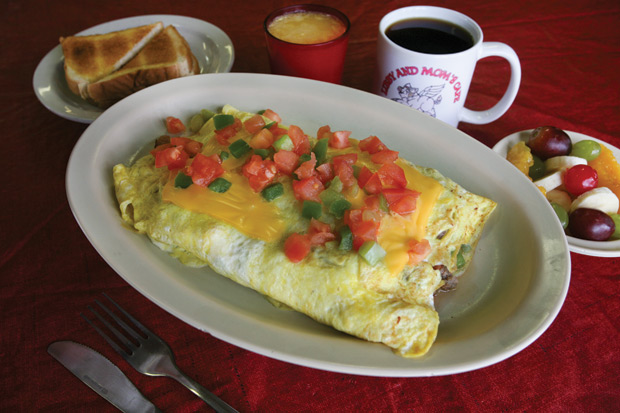 Though Libby and Mom’s Café offers daily breakfast and lunch specials, customers seem to always gravitate toward the restaurant’s original Western Omelet. The folded classic is filled with bacon, ham, sausage, green bell peppers, tomatoes, and cheese, and is served with a side of toast or biscuits and gravy. Server Elizabeth Lunceford says the omelet is ordered about 25 times every day between 6 a.m. and 10:30 a.m., though Saturdays are a different story. At Libby and Mom’s, Saturday is a day for breakfast as there is no lunch special and breakfast is served from 5:30 a.m. to 1 p.m.
2 Richardt Ave., 812-437-3040, Find Libby and Mom’s Café on Facebook 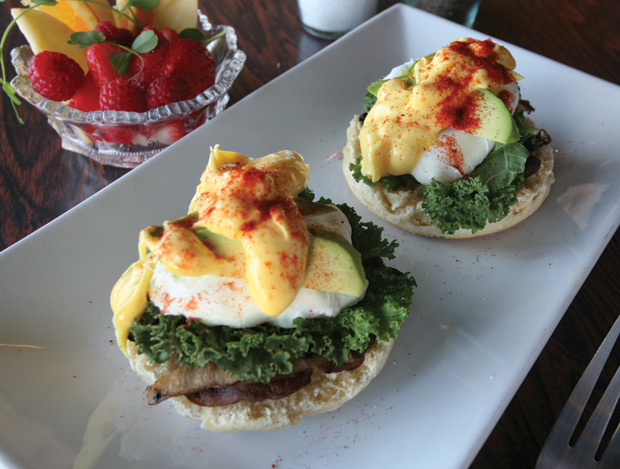 Despite boasting an extensive breakfast menu, PG is an early-morning hotspot for two reasons: Eggs PG, an eggs benedict with kale, mushroom, avocado, and paprika hollandaise, and the Big Breakfast Burrito, made with 12 ingredients including avocado, potatoes, black beans, and cheddar. “People have a hard time finding fresh, organic veggies in Evansville,” says Kate Horvath, kitchen manager. “We don’t take shortcuts on anything.” Even the bread is homemade.
1418 W. Franklin St, 812-402-4445, Find PG on Facebook

In business and family-owned for the last 30 years, Rosie’s Diner prides itself on its home-cooked breakfasts and bigger portions. Kim Stevens, Rosie’s daughter, says a favorite among customers is the Texas Omelet. Made with six eggs and filled with sausage, bacon, green peppers, onions, tomatoes, and potatoes, the omelet comes with a side of fried potatoes, homemade biscuits, and gravy made in-house.
1423 W Maryland St, 812-421-1121, Find Rosie’s Diner on Facebook

Known for their coffee, finely pulled espressos, and classic teas, Penny Lane Coffeehouse also serves up hearty breakfasts to complement their specialty cups of joe. Customers at both of Penny Lane locations on the East Side and Downtown — and a third location to open on Franklin Street — get to build their own breakfast “sammiches,” any time of the day, choosing from a variety of bread, meat, fillers like vegetables and cheese, and spreads. Many of the makings of “sammiches” are vegan and/or organic, so there is a breakfast on the menu for every lifestyle and taste.
Three locations in Evansville, 812-421-8741, pennylanecoffeehouse.com 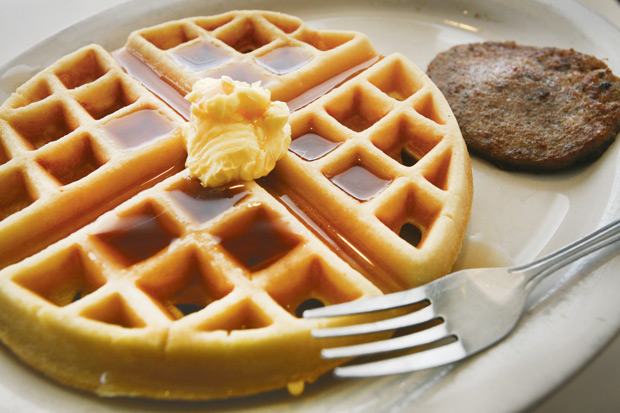 When customers walk into 24 Hour Diner, they ask for December. Hailed among regulars as the best cook in the area, December is one of the diner’s secret weapons, says Manager Julia whose been with the restaurant for three-and-a-half years. Formerly known as First Avenue Diner, the quaint, timeless establishment keeps its breakfast arsenal loaded with two best-sellers: completely customizable omelets, and Belgian waffles. What makes the diner’s waffles “state of the art,” however, is a secret, Julia says. “You’re going to have to come in and see for yourself.”
520 N. First Ave., 812-423-7011, Find the 24 Hour Diner on Facebook

With nine locations in the Tri-State, locals have no trouble satisfying their glazed cravings thanks to Donut Bank. Though these locations offer more than 100 baked goods, their classic honey-dipped glazed donut seems to always reign supreme. It was after its third store opening, on St. Joseph Avenue in 1976, that Donut Bank repositioned itself as a local hotspot. “I think that store changed Donut Bank forever,” says Ben Kempf, vice president of the bakery. “It made Donut Bank the neighborhood hangout.” Serving up piping hot coffee, bagels, pastries, cookies, muffins, brownies, cakes, and free Wi-Fi, Donut Bank is the perfect meeting place for people who prefer their breakfast on the sweeter side.
Nine locations in Evansville, Princeton, Indiana, and Henderson, Kentucky, 812-426-0011, donutbank.com 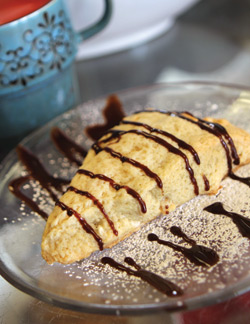 Owner Jill Carter says the reason “quaint and homey” Coffee Cottage & Café near the University of Evansville is a popular choice for breakfast is the scones. “I think we’re the only place in town that offers homemade scones,” she says of the baked daily, addictive treats. On weekdays, guests can build their own omelets, adding up to five fresh ingredients plus cheese. Coffee Cottage offers an array of folded egg options, such as the Mexican, Greek, and salmon omelets. With seven different drip coffees hot and ready to go, the Cottage serves up a completely customizable breakfast experience.
612 S. Weinbach Ave., 812-401-1930, Find the Coffee Cottage & Café on Facebook

At Savannah’s, everybody knows everybody, says Manager Mary Lang. The café’s regulars come for an early morning game of cards and stay for a Western Omelet. Many pair their eggs, stuffed with ham, green peppers, tomatoes, onion, and cheese, with a side of jowl bacon. “It’s the same kind of bacon that was eaten in the older days,” says Lang. “It’s hard to find.” Customers, however, can easily find it on Savannah’s all-day breakfast menu.
1802 Stringtown Road, 812-773-5001, Find Savannah’s on Facebook

Krista McCormick has been working as a server at The Yellow Rose since July. Since her first day at the restaurant, she has noticed that customers really seem to gravitate towards the breakfast specials that are offered everyday until 10:30 a.m. “I think part of the reason people order the specials so much because it’s good food and a good price,” says McCormick. On Mondays for just $4.25 customers of The Yellow Rose can order bacon, two eggs served the way they like, and hash browns or home fries. Tuesdays offer eggs, sausage, and your choice of potato. Wednesday’s special is eggs, biscuits, and gravy, and the choice of home fries or hash browns. Thursday’s special is eggs, smoked sausage, and choice of potato while Friday’s is the same, replacing smoked sausage with ham. The Yellow Rose serves breakfast all day, everyday, but the breakfast specials are only offered until 10:30 a.m.
4313 E. Morgan Ave., 812-401-0189, Find The Yellow Rose on Facebook