When families come to Lampion Center, it’s often on the day they would consider the worst of their lives. Their child may have been sexually molested or abused — one in 10 children nationwide are sexually abused before their 18th birthday. Someone may have had an addiction problem or undergone trauma, and the family sought the nonprofit counseling agency for help.

In an attempt to encourage this healing process with young children, who often struggle communicating what they’ve gone through, Lampion, which specializes in counseling children and families with a sub-specialty in treating young children, introduced something to help in addition to their highly-skilled therapists. Roary the Lampion Lion, a stuffed animal lion and unconditional friend, is given to children upon arrival at the center. Lisa Tanner and Sue Anne Mullen conceived the idea of Lampion’s mascot around eight years ago.

“We were looking for a way to have (the children) immediately connect security and safety to Lampion,” says Scott Wylie, Lampion board member and executive director at the Vanderburgh Community Foundation.

Children at Lampion, located at 655 S. Hebron Ave., receive a Roary stuffed animal when community members donate $20 — $10 pays for the lion and $10 goes to providing the child therapy. A therapist gives the lion to the child upon arrival at the agency the first time and it becomes his or her connection with the therapist, says Lampion Development Director Jennifer Childress. The therapist then explains how lions are courageous and protective.

“We want children to know at Lampion that we are all about family. We want them to be courageous so we can help them,” says Childress, who has worked at the center for three years. “Roary comes back to a lot of therapy appointments. The stories I hear in the hallways absolutely make you cry. The kiddos say, ‘I brought Roary today and I’m going to tell you what happened.’

“For that to happen, it sometimes takes months for a child to tell what happened. Roary will come and if Roary is on the table they can talk, but if Roary leaves the room, they can’t. Roary has gone to court and all kinds of places. Roary is this stuffed thing that gives them courage to talk about this awful stuff that has happened. He also comes back in more lighthearted ways with haircuts and clothes. It really is a huge way we do therapy here — through a stuffed animal we buy in bulk.”

Lampion, formerly Family and Children’s Service, offers counseling services to people of all ages in Vanderburgh, Warrick, and Posey counties for affordable rates based on their income. The type of counseling offered can range from marriage and family counseling, grief and loss, depression and anxiety, and others. Lampion also provides psychological testing to all age groups for issues such as ADHD, learning disabilities, etc. The nonprofit operates with help from local United Way support and through program service fees, grants, contracts, and donor gifts. The agency’s history in Evansville can be traced back to Aug. 6, 1885, when a group of women formed an organization to help meet the needs of Civil War veterans and their families in Evansville.

The organization has several partnerships in the community including sharing services and therapists and offering support groups. Lampion works with groups such as Albion Fellows Bacon Center, Holly’s House, House of Bread and Peace, Evansville Vanderburgh School Corp., and others. Lampion also works with the court system and offers mandatory parenting divorce classes, which both parents are required to attend if they have a child under 18.

“By forming these partnerships, we help them help their clients,” says Childress. “It’s a community response that can hopefully heal that whole circumstance. Those collaborations are vital not only to community health but to keeping people out of the system so we don’t see them again in 10 to 15 years.”

These collaborations potentially can help prevent a harmful cycle. Another way Lampion works to prevent child sexual abuse is through a free class called Stewards of Children. This program has trained 4,000 people in the last five years and helps educate adults on the proactive steps to protect children.

“These are hard services to find. These are areas that are very challenging to talk about even,” says Childress. “When you talk about child sexual abuse, people say, ‘Well there’s only one or two cases in Evansville.’ You’re only getting it when it’s in the newspaper. We have eight therapists who are fulltime. We are booked for months. It’s heartbreaking. Our therapists are seeing significant issues, not only in dealing with child sexual abuse, but also other issues that impact the lives of families and our community.”

“Every time one of these kids is able to stay in school or a family is able to function more effectively, it doesn’t just benefit them. It benefits everybody,” says Wylie.

For more information about the Lampion Center, call 812-471-1776 or visit lampioncenter.com.

Battling a leaky and stained ceiling, broken desks, water and structural concrete damage, and aged phone and computer technology, the Lampion Center had to work to convince its clients that the agency was a place of safety and healing.

“If you are bringing in your 6 year old for counseling, something concerning has happened,” says Jennifer Childress, development director at Lampion Center. “If that worst day in your family’s life has occurred and you’re sitting in our lobby and I have duct-taped the ceiling tiles, it doesn’t feel like you are at the right place. That specialty wasn’t aligning with the impression our building was making. Clients started to feel like they weren’t worth anything.”

Two years ago, the agency sought help from Bob Jones, CEO of Old National Bank, “because the building was aging dramatically,” says Childress. Lampion had lost a furnace and an air conditioner, and the need for a capital campaign became a reality. After the initial meeting to gauge whether a campaign was feasible, Lampion left with not only a plan to start raising money, but also with co-chairs of Jones and Jim Muehlbauer, who is vice president of Koch Enterprises.

“When the head of your capital campaign are co-chairs of Bob and Jim, it shows the belief the community has in the work we are doing,” says Scott Wylie, Lampion board member and executive director at the Vanderburgh Community Foundation. “You need leaders of that group who can get in the door and ask for the resources to make it happen. Every nonprofit dreams of having people like Bob and Jim. 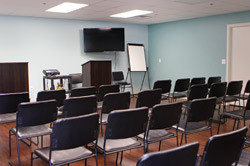 “There’s a reason why everyone knows their names. It’s not just because they lead large corporate entities.Having people who are regarded for their community service is a game changer.”

Three weeks after meeting with Jones, Lampion’s first-ever capital campaign was launched. The agency asked for $1.4 million and in the last two years it has raised $1 million. Childress says she hopes to obtain the remaining deficit by the end of the year.

“The only issue we have to overcome is that Lampion is one of Evansville’s best kept secrets,” says Jones. “The staff is so dedicated to serving their clients and they are reticent about promoting themselves and the challenges they faced in their building — we often times need to tell the story.”

A portion of the $1 million raised has gone to the much-needed interior and exterior repairs to the building. In June 2014, the agency began working with CORE Contractors Inc. in an 11-month renovation project. The improvements included new flooring, new paint, new roofing, new furniture, new HVAC, and allowed the agency to gain 2,000 square feet of previously unusable space and transform it into a meeting space for 40 to 60 people.

“What this transformation of the facility has done is allow us to immediately show that our clients deserve the same environment for their healing that anyone has,” says Wylie.

“The hole in the community without Lampion Center would be huge,” says CORE owner Jeff Hatfield. “It is deserving of everyone’s support to keep it going and keep it vibrant.”