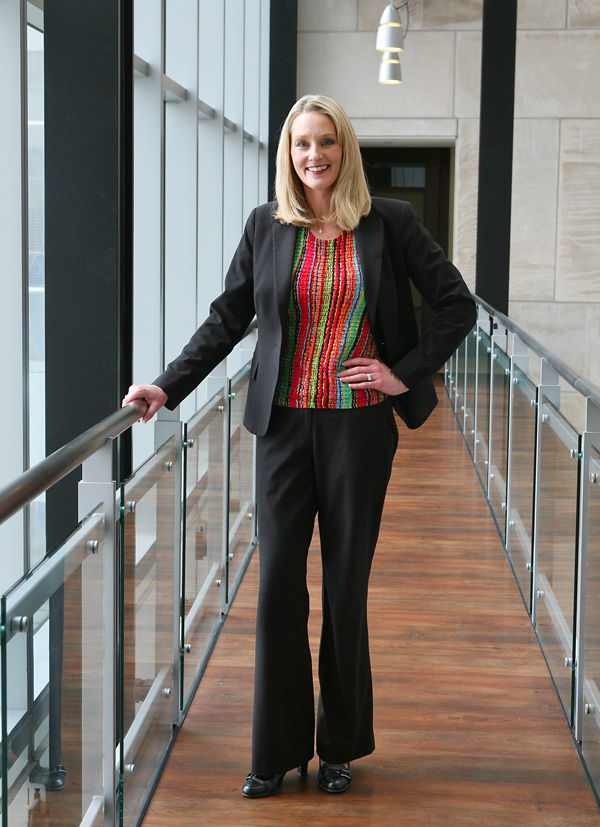 Her Resume: Sara Miller’s business card includes a little extra information: that she’s been an associate with Old National Bank since 1996. Miller began her career at ONB as a Business Development Officer, which developed into a Commercial Relationship Manager. In 2006, she was named Senior Vice President, Corporate Relationship Executive. From there she moved up to Executive Vice President of Commercial Banking, and in April, was chosen as Old National’s Southern Region CEO. Miller earned a Bachelor of Science degree from the University of Evansville in Finance and Economics.

On asking for a promotion:
I reached out to Jim Sandgren following the announcement that he was stepping into the role as Chief Banking Officer. When thinking about expressing my interest in following him as the Southern Region CEO, I thought, “What if he says no?” But throughout my career, and specifically during the past six years, my role has allowed me to work on a variety of initiatives and projects, which required me to grow and develop at the bank. I know now that these experiences were preparing me to be ready to put my name in the hat. I am looking forward to continuing to learn and develop, and am thankful to have the opportunity to work with a phenomenal team in the southern region.

On being a woman in banking:
There are a lot of great opportunities for women in banking, and it isn’t uncommon to see women in leadership positions at Old National. In fact, if you take a look at our executive leadership group, it’s close to 50/50. It really goes back to the fact that diversity and inclusion is one of our core values.

On dreaming about success:
Back when I was in high school, I used to think, “I want to go to some big city to make my mark.” I believe it to be great luck that I decided to attend college at University of Evansville. Most importantly, I met my husband while attending UE, and fell in love not only with him, but with the city. And honestly, in comparison to Aurora, Evansville is a big city. I know Evansville is nowhere near the size of Chicago or New York, but I never thought that I’d have the opportunity to be sitting here. It’s certainly an honor to serve in this role.

On how banking has changed in the last five years:
Banking changed because everyone was lumped into the same pot when the financial crisis took place: large banks, community banks, even the very small banks. We didn’t originate the types of loans that were part of the financial crisis. We’re a “boring, basic bank,” doing what we have historically done to provide quality products and services at a fair cost for consumers and businesses. That’s who we are and the current regulatory environment presents challenges for our business but we’ll find a way to meet those challenges and continue to serve our communities as we have for the past 180 years.

On balancing work with home life:
Eric and I work together to divide and conquer. I’ll admit that sometimes it isn’t pretty, and our family calendar looks like a logistics nightmare. But you decide what things need to be done and where you need to be. We rely a lot on our circle of great friends to coordinate rides to and from activities for the kids when necessary, and return the favor as well. It’s a world of carpools and has brought some great moments in all of our lives. And only once has one of our friends forgotten one of our children.

Advice for banking success:
Make sure you give yourself credit for the value you bring, in anything you do, whether it’s banking or whatever you are involved in. I feel that we all bring value when you work hard and do the right thing the right way. Keep it in mind that we’re going to go through an entire life span in a banking relationship. What you need at 18 and 25 years of age is completely different from what you need at 40 and 60 and beyond.