To adequately explain the legend that is Funky’s, a hugely popular discotheque open in the late 1970s at 18 S. Third Ave., one must take a step back to a time before cell phones or social media, before Mothers Against Drunk Drivers (MADD), and before AIDs clinics.

In the mid to late 1970s, the cultural phenomenon of the disco era raged, which gave birth to a thriving dance club scene. Just as disco music began topping the charts in 1974, Evansville native Robert Folz used money earned from his successful record store and clothing boutique, FolzCity Boutique, to create a nightclub in a large, 120-year-old dirt-floor Holtz foundry located on the riverfront of Downtown Evansville.

He enlisted the help of B.J. Hungate, an acquaintance, who specialized in club and restaurant management and worked at the Hadi Shrine. They hired a team of carpenters and laborers to turn Funky’s into a 14,000-square-foot center of the universe.

After all, when the nightclub opened in 1975, it became the envy of every bar statewide, says John Steinhauer, vice president and co-owner of Oswald Marketing. Steinhauer was working for the Evansville Printing Corp. when he was recruited to join the Funky’s team in 1976 and eventually became the corporate public relations and advertising manager. The management team at Funky’s included Steinhauer, Folz, Hungate, and Jack Laroy.

“I remember in those days, which is so hard to believe, but there were 500 people in line to get in, and it could have 1,000 people already inside,” says Steinhauer. “It was like a movie, really, and you couldn’t believe you were in this movie.”

Folz, who passed away in 2009 at 61, opened Funky’s at 27, and later opened Mr. Funky Monkey, a teen night club on the East Side which lasted only three months before morphing into Good Time Bobby’s. The restaurant, located at the corner of Washington Avenue and Green River Road, lasted several years and was later sold.

“Bob was absolutely a wild character,” says Steinhauer. “He would walk in and say, ‘We are all going to Aspen.’ And we would all fly out to Aspen for 10 days. It was crazy. We saw it all.

“He was one of the most creative individuals. It was really all his vision to make it look the way it was. He was very unique, creative, and artistic.”

Hundreds of thousands of people drove to experience how “the magic is in the mingle,” a phrase coined by Folz because of Funky’s cocktail party mingle atmosphere with eight bar stations producing heavy beverage sales. Funky’s sold 8,000 to 10,000 glasses of beer each week and about as many mixed drinks. Drinks were served with the help of an Easybar system.

One push of a button and the liquor filled the glass. Funky’s was one of the first bars in the country to have this installed, says Steinhauer.

The discotheque featured light shows, strobes, mirror balls, and eight projectors displaying photographs of customers on white scrim shrouded over carpeted walls with 35-foot ceilings. Steinhauer joked that once in a while when the pictures would flash on the wall, someone would call Steinhauer to take the image down right away because someone’s wife was with someone other than her husband.

The entertainment didn’t stop there — Funky’s game room had fountains, dozens of exotic plants, and electronic and traditional game machines. This room had the original stone foundry floors, Steinhauer remembers. The nightclub also had a restaurant with hoards of antiques, stained glass, and a famous fish tank. Fred Williams worked as the kitchen manager at Funky’s and later went on to open Fred’s Bar & Grill, 421 Read St.

Funky’s introduced the innovative concept of regularly scheduled major, large expenditure, and high-return promotions. A regular ongoing promotion was Ladies Night, which featured a fashion show. The very popular Wet T-shirt promotions were held several times a year. Steinhauer, at 25, was promotions director, handling most of the promotions like the Gong Show, the ‘50s and ‘60s nights, and the Wet T-shirt and Wet Gym Short contests. The biggest moneymaker of all was “Fast Freddy and the Playboys,” which featured male strippers. The Sunday Evansville Courier printed a story about the event titled: “Freddy: We hardly knew ye” and quoted Dr. Ann Brandt, a psychology professor at Indiana State University Evansville (now the University of Southern Indiana).

Brandt described the scene as women experiencing a tremendous freedom to express feelings and sexuality. “This was probably the first these secretaries and housewives had been sanctioned to get wild,” she said.

The promotions cost from around $1,000 to $2,000 to arrange, but returned a high profit percentage. Folz accepted the disco-era industry was short-term and in 1980 after a poor earning projection, he announced the closure of Funky’s that March. The nightclub hosted one final party on March 30, which Steinhauer called “unbelievable.” The event was called “Funky’s Last Dance,” which was fitting, as the No. 1 song on the chart was Donna Summer’s “Last Dance.”

“Not everyone got in,” he says. “Everyone was crying. That was where we met all of our friends. There were about 15 of us who became friends and we are still friends today. People loved Funky’s and they still talk about it. Those days are long gone. They can’t be brought back.” 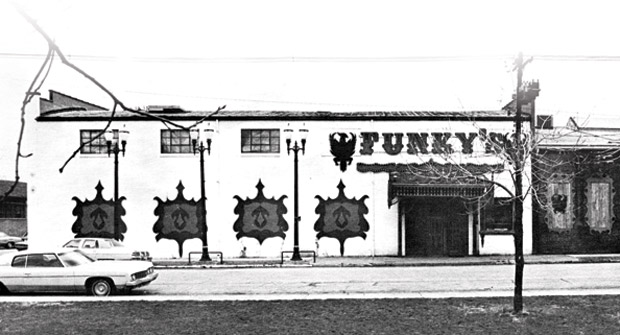