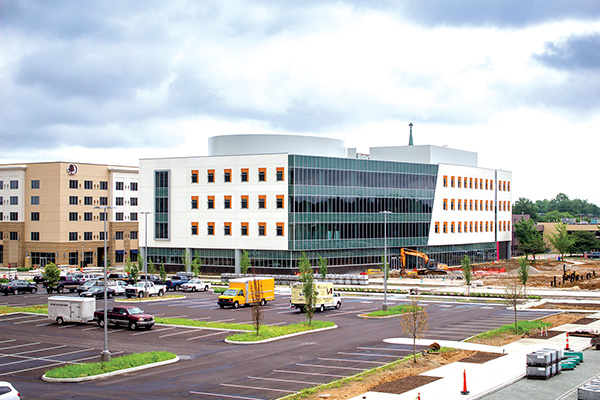 The completion of the multi-institutional health sciences building in Downtown Evansville has long been anticipated since the project first broke ground in 2015. Since then, the new school campus has made many strides but most recently has taken a new name. With a donation of $15 million from William and Mary Stone, Evansville natives and owners of SS&C Technologies Inc., the health science building has been named the Stone Family Center for Health Sciences.

According to Cathy Zimmermann, director of development and public relations, IU School of Medicine — Evansville, the substantial donation by the Stones will go toward health science programming implemented by the three member institutions — Indiana University, University of Southern Indiana, and University of Evansville.

“They [William and Mary Stone] are helping to create a healthier, more vibrant community and leaving an indelible imprint on Evansville and the families who call the city and surrounding area home,” says IU President Michael A. McRobbie in the press release announcing the donation.

In the February/March 2016 issue of Evansville Business, we sat down with Dr. Steve Becker, director and associate dean of the IU School of Medicine – Evansville, to discuss the new campus and health sciences building. Becker, who originally pitched plans for a new medical school campus back in 2011 when he took on his current role, recently was awarded the Evansville Rotary Club Civic Award to commemorate his efforts.

For more information about the Stone Family Center for Health Sciences, visit medicine.iu.edu.