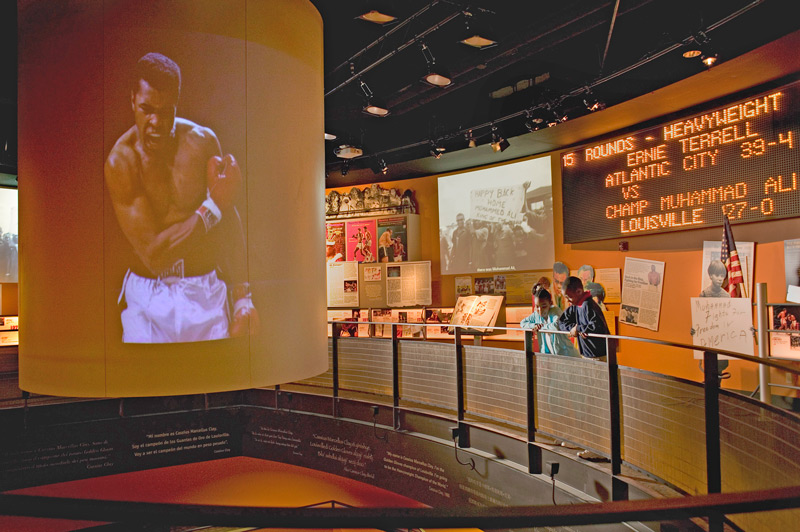 Editor’s Note: A version of this story was published in the July/August 2016 issue of Evansville Living magazine.

Up close, the rectangular ceramic tiles that wrap the exterior of the Muhammad Ali Center appear to be arranged in random abstract patterns. But from a distance — as you drive past the downtown Louisville, Kentucky museum on Interstate 64, for instance — the patterns resolve into images of Ali.

The Ali Center opened with great fanfare in 2005, drawing singers, actors, athletes, and other celebrities. Many returned to Louisville following Ali’s death on June 3, 2016, with the Ali Center serving as a natural location for people to pay their respects. Within two weeks of Ali’s passing, about 20,000 people had visited the Center, says Jeanie Kahnke, senior director of public relations and external affairs.

“The world loved Muhammad Ali, and he loved back,” she says. “The Ali Center continues to welcome visitors to experience how The Greatest became such a cultural, historical, and sports icon, and to be inspired to find their own personal greatness.”

Inside, the Ali Center explores the many life stages — three-time world heavyweight champion, Olympian, showman, conscientious objector, Muslim, peacemaker, and humanitarian — of a man who was larger than life, a man who was born in Louisville as Cassius Marcellus Clay Jr. but would come to be known worldwide simply as “The Greatest.”

The journey begins with a short, inspirational film in the immersive, five-screen Orientation Theater. “If You Can Dream” introduces Muhammad Ali’s six core principles: confidence, conviction, dedication, respect, giving, and spirituality, which provide the framework for the center’s two and a half levels of films, photos, and interactive exhibits.

In the area focusing on Ali’s boxing career, you can shadow-box with The Champ, try your hand at the speed bag, and feel the simulated impact of his punch against a heavy bag. You also can view 15 of his fights, including the Rumble in the Jungle, complete with the original broadcast commentary. Elsewhere, you’ll see footage from the Civil Rights era, Ali’s refusal to be drafted during the Vietnam War, and his emotional lighting of the torch at the 1996 Olympics in Atlanta.

Current temporary exhibits include “Truth Be Told: The Policies that Impacted Black Lives,” an exploration of policies that founded and perpetuated systemic racism in the U.S. The exhibit runs through Feb. 27.

To celebrate Black History Month in 2022, Tri-State residents have the opportunity to join the University of Evansville’s Center for Diversity, Equity and Inclusion on a day trip to the Muhammad Ali Center and Roots 101 Museum on Feb. 19. Tickets are $15 for students and $25 for non-students, with payment due by 5 p.m. Feb. 18. Questions about the day trip itinerary and payment options can be addressed to Center4DEI@evansville.edu.

Face masks are required upon entry to the Muhammad Ali Center

The Main Ticket: If you’ll be in town for a few days, check out this discounted ticket, which bundles admission to the Muhammad Ali Center and five other downtown attractions — the Frazier History Museum, Kentucky Museum of Art and Craft, Kentucky Science Center, KentuckyShow!, and Louisville Slugger Museum & Factory. Learn more at museumrowonmain.com.