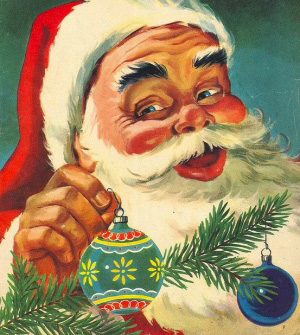 She repeated this sentence over and over as twilight leaked its ink across southern Indiana.

It sounds like a good title for a drive-in horror movie, but actually this was our mother’s five-worded Christmas Eve mantra, which always began at 5:30 p.m.

My younger brother Patrick and I still butt-scooted our way toward the living room window, of course, inch by cautious inch, but mom’s voice always caused us to abort our mission before the living room curtain could be parted for a looksee.

Even from a different room, out of sight, she knew what we were doing. “Don’t look out the window,” she’d warn, hollering over Buck Owens and the Buckaroos’ “Santa Looked A Lot Like Daddy” playing on the stereo console. Dad always got a kick out of that song. It played 100 times that day, confounding me with its lyrics.

There was a hidden message in that song. The wink-winks between adult relatives when it played told me so.

“He won’t come if you do. He’ll fly right over our house and take your toys to other girls and boys.”

It was torture being blocked from looking out the front picture window. We wanted to see Santa and his flying reindeer in action. As 6 p.m. drew closer, we were sequestered in the kitchen where we anxiously watched the wall clock. Before Santa came, we knew the phone would ring. It would be Grandpa Saalman pretending to be Santa. We knew it was Grandpa; it just sounded like him trying to sound like someone else. He was a lousy impersonator. Yes, we had been good that year, we told him. We recited our wish lists per his request even though it was too late for Santa to be asking such questions. It was Christmas Eve for Pete’s sake. We also knew it was impossible for Santa to be talking on the phone airborne en route from the North Pole. This was way before cell phones — even Santa’s elves lacked the imagination to dream up a sleigh phone.

We also knew that the arrival of Grandma and Grandpa Goffinet, plus some of our aunts and uncles, had to happen before Santa’s visit. We prayed they wouldn’t run out of beer before getting to our house, or they’d have to make a stop at T&R Liquor, preempting our Christmas. I doubt the Three Wise Men posed a similar dilemma. It was tradition for mom’s side of the family to arrive before Santa, their Stroh’s and Sterling in tow. They liked watching us get our gifts. Oddly, Uncle Bill and Aunt Bonnie were always missing from this gathering. It concerned me that Bill and Bonnie apparently didn’t care for Christmas.

Our house was one of the few I knew where Santa didn’t mind being seen in person. We actually sat on his lap, fielded the same questions asked of us by Grandpa Saalman mere minutes before and then Santa personally handed us our presents pulled from his huge cloth sack (the toys always what we wished for).

One year, though, he pulled a real zinger. He brought in a sack of twigs — the dreaded switches we were always warned about by our parents, usually beginning around Dec. 1. My heart dropped seeing those switches. That Christmas song was right after all. He does know if you’ve been bad or good. I had a summer flashback of me coaxing my brother to poop in his ball cap much to the amusement of our visiting cousins. Patrick saw the switches and burst into tears. The aunts and uncles, even our grandparents, laughed. Their laughing, fiendish faces reflected off the Christmas tree’s shiny glass ball ornaments — the worst holiday moment ever. This wasn’t Norman Rockwell; this was Norman Rockhell.

The bag of switches was just a big fat joke — though it made a lasting point. Ha. Ha. Ha. Ho. Ho. Ho. We were Punk’d decades before Punk’d existed. The real sack of toys, pulled from outside, cheered us up.

Santa never stayed long. There were many houses to visit. When the heels of his black boots exited through the doorway, mom would warn us once more, “Don’t look out the window,” depriving us of seeing the sled’s liftoff with Rudolph leading the way.

On my 11th Christmas, though, after Santa stepped outside and mom issued her final window warning, I noticed her preoccupation with installing batteries in one of Patrick’s gifts. So, naughty or nice no longer seemingly applicable, I looked out the front window. I saw Santa climb into the passenger side of my Uncle Bill’s big brown Buick. Aunt Bonnie was behind the wheel. Even now, I wish I had listened to my mom. Never look out the window.