The Fastest Game on Two Feet 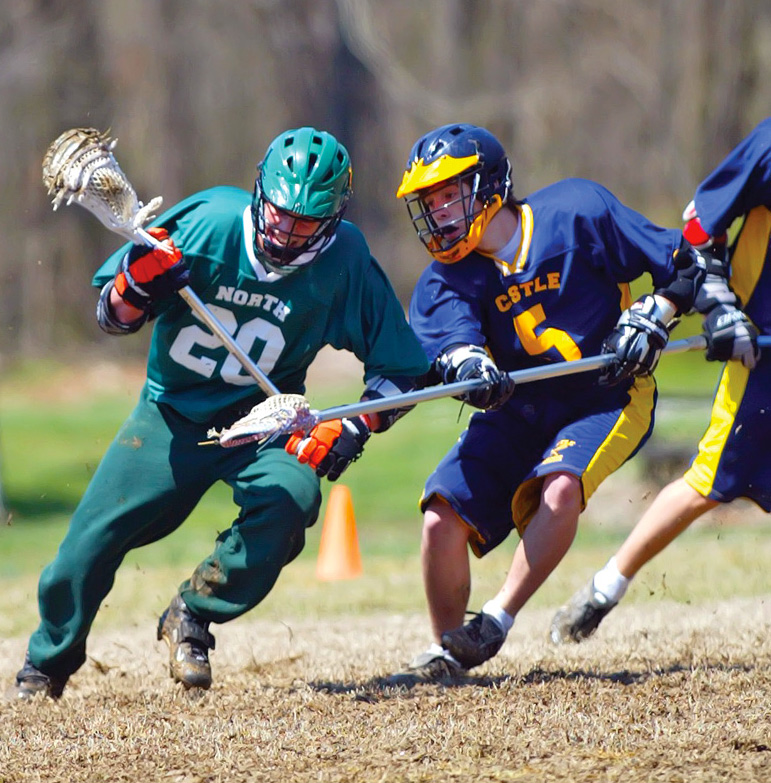 Often referred to as “the fastest game on two feet,” lacrosse is Evansville’s fastest growing team sport for men and women at the collegiate, high school, and youth levels.

“It’s a physical sport like hockey and football, but with a lot of the strategies of basketball or soccer,” says Larry Goldstein, president of the Greater Evansville Youth Lacrosse Association. That means there’s lots of movement on the field. Each team has 10 players, and each player is equipped with a stick that has mesh attached to its head. This mesh traps a small rubber ball that players pass to their teammates. The ultimate goal, as in hockey and soccer, is to get the ball in the opposing team’s goal.

“It’s fun to play because there’s more goal scoring than in soccer or hockey, the action is continuous, and it’s physical and aggressive,” Goldstein says.

Long a favorite sport on the East Coast, lacrosse got a foothold in Evansville when Goldstein moved here with his family from Philadelphia, Pa., in July 2003. His sons had been actively involved in lacrosse, yet the game barely existed here. Goldstein’s friend Brian Marston (then of Evansville, now of Boston, Mass.) had the same problem when he moved to the area. He had promised his son lacrosse in a city where there wasn’t any.

That led Marston and Goldstein to found the Greater Evansville Youth Lacrosse Association in 2006. The first lacrosse clinics for students were held that June for children in grades 3-12. With crucial help from Tim Clark of Boonville, Mark Turner of Evansville, and Bill Morrison of Newburgh, the organization grew from modest beginnings. The first clinics took place in a field area in front of Evansville Day School.

“I call it a ‘field area’ because it wasn’t on the soccer field,” Goldstein laughs. “It was just grassy plains.”

Still, interest grew, and in 2007, the group kicked off its first official season with 110 players. This year, Goldstein expects between 450 and 500 players.

“People try it and they like it,” he says of the sport’s growing popularity. “It’s giving more students the opportunity to be student athletes.”

The Greater Evansville Lacrosse Association splits players up based on grade level and gender, grouping third- and fourth-graders, fifth- and sixth-graders, seventh- and eighth-graders, and high school students into their own separate divisions. While the association is directly involved in all aspects of the elementary and middle school games, it simply serves as an organizational effort for the high schools, Goldstein says. The Indiana High School Lacrosse Association is actively involved with local participating high schools, which include Castle, Central, Harrison, Memorial, North, and Reitz.

“Take the opportunity to watch a high school game this spring,” Goldstein says. “Come see what all the excitement is about.

For more information on lacrosse clinics or to register your child for a team, visit www.evansvillelax.com.