The Patron and Painter 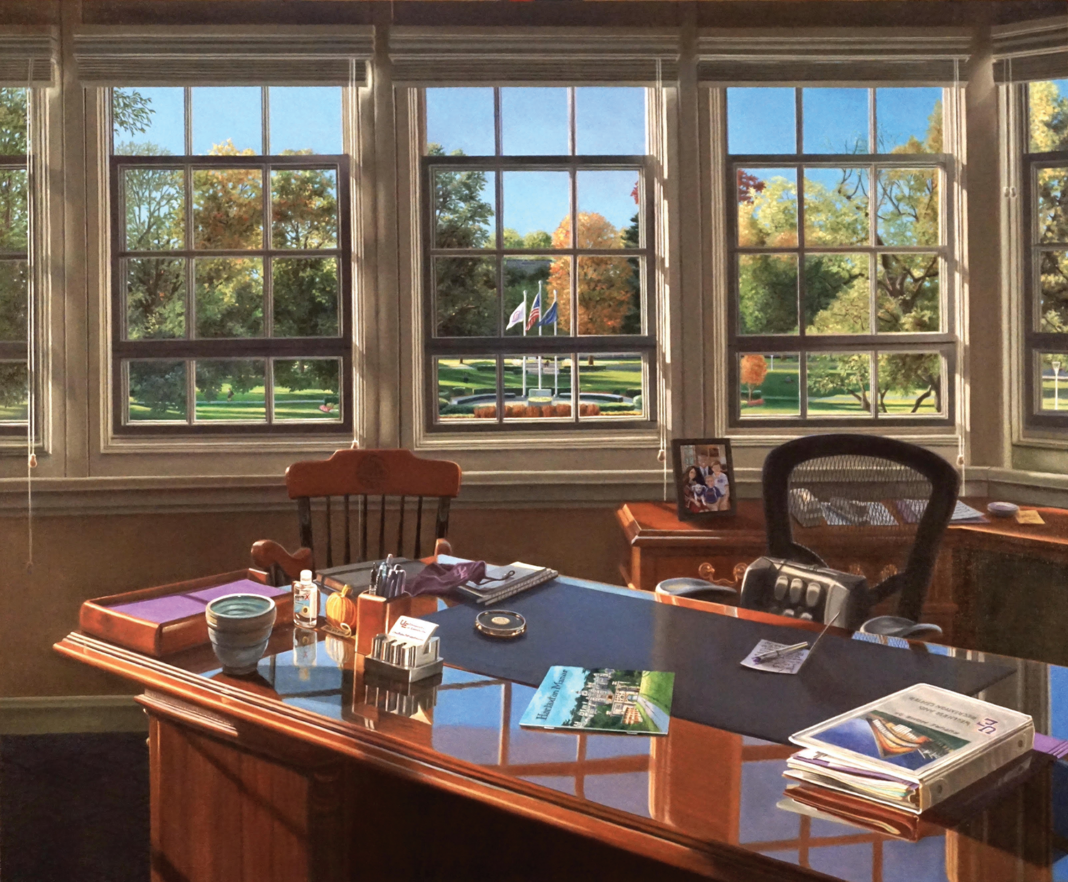 On the second floor of the University of Evansville’s Olmsted Administration Hall, President Christopher Pietruszkiewicz takes one last look at the Sesquicentennial Oval his office overlooks before stepping out. Scurrying off to a meeting, he gives his usual farewell to his executive assistant Patti Lippert, who smiles in turn, watching the president exit as the door shuts behind him.

She’s still for a moment, making sure the coast is clear, and then she snaps into action, sending a quick text on her phone. “He’s gone! Come now!” A short while later, Katie Waters slips into the building, up the stairs, and into the office.

On her way in, the artist and University of Southern Indiana emeritus art professor passes two paintings hung on either side of the door. Each depicts Harlaxton, UE’s British campus, and was gifted by Virginia Schroeder to former university presidents Thomas Kazee and Stephen Jennings. Each was painted by Waters. 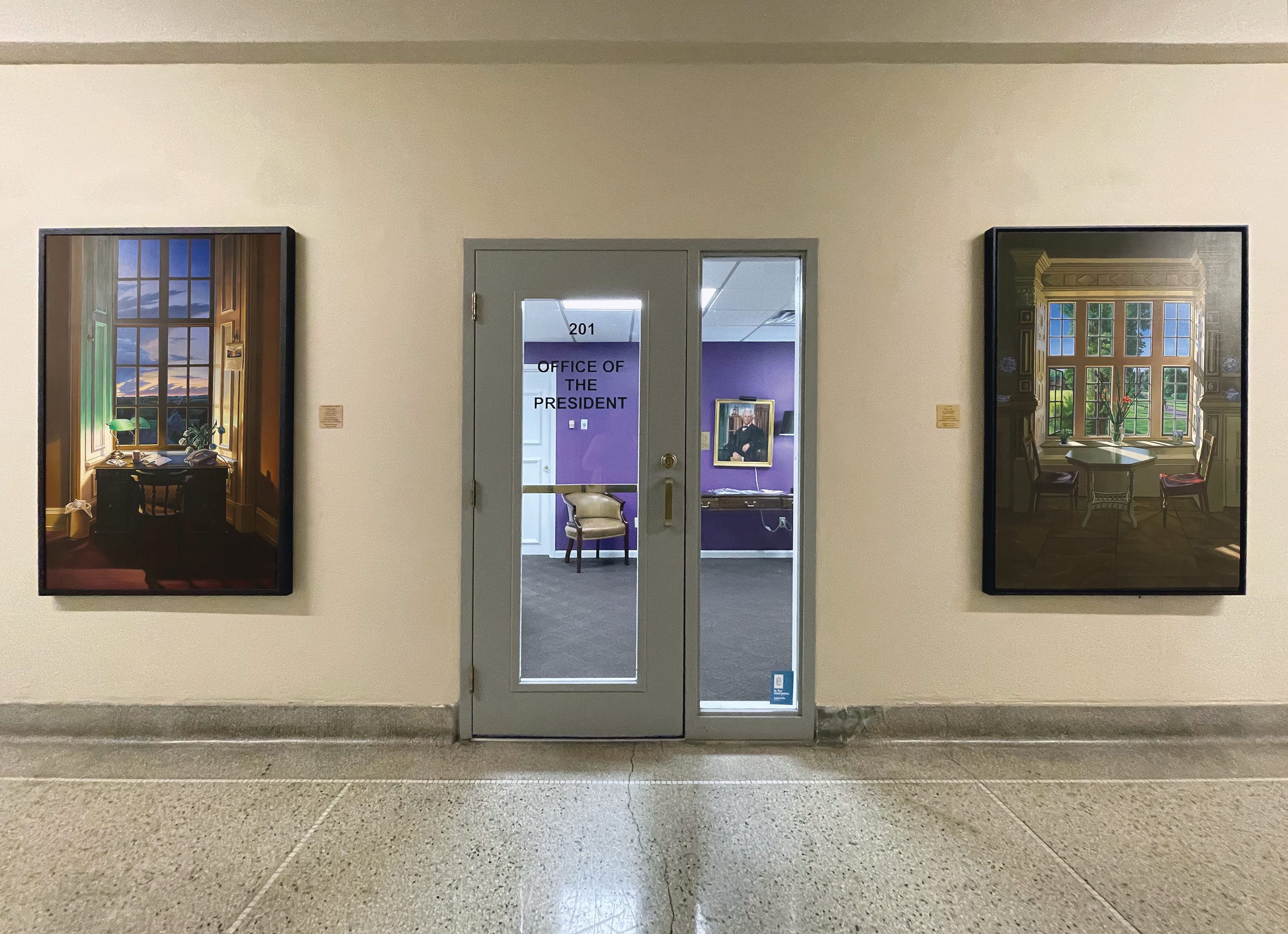 “Mother had seen these paintings, and she just fell in love with it because she loves Harlaxton,” says Melissa Mattingly, Schroeder’s daughter.

Schroeder is known in Evansville as a patron of the arts. She created an endowed chair called the Virginia G. Schroeder Curator of Collections at the Evansville Museum of Arts, History and Science.

A longtime friend of Waters, Schroeder bought both paintings from her to honor each president. These purchases laid the groundwork for Schroeder’s next big gift to UE.

In 2019, the then-95-year-old Schroeder approached Waters and asked if she could commission a painting to give Pietruszkiewicz and his family — wife Siobhan and sons Ryan and John — whom she met after his recent inauguration and immediately adored.

“I’m humbled that she asked me,” Waters says. “I love her. She is one of the most fantastic women that I’ve ever had the privilege to do work for, and just delightful, such a supporter of the arts and of education.”

The project was the reason for Waters’ covert visit. While Pietruszkiewicz was out of the office, Waters took source photos and made sketches of every detail of his desk, which was the painting’s subject matter. She visited seven times in total, even managing to take a picture of a card Pietruszkiewicz wrote to Schroeder.

It took great effort and an impressive amount of coordination between Lippert, Waters, and Mattingly, who acted as a go-between for her mother during the COVID-19 pandemic and when Schroeder’s health started to decline.

“It was an incredibly bad time with COVID hitting because now how does Katie communicate to Mother?” Mattingly says. “One of the good things that came out of this is just to see the alternate communication come up between these two ladies. It was a really beautiful personal and working relationship between both.”

Waters finished her reference photos in fall 2020 and sequestered herself to begin creating the masterpiece. Only Mattingly and Schroeder were given glimpses of Waters’ progress, and Pietruszkiewicz still was in the dark.

The process took several months. Waters started with a preliminary drawing and then completed a process called underpainting which defines the forms of objects in the composition using highlights, mid-tones, and shadows. This dull layer helped enhance the color pallet when Waters performed the overpainting, adding additional layers and colors.

Waters added glazing to create richer color tonalities, and in early August 2021, the piece was complete. By this time Schroeder had turned 98 and moved into an assisted living facility.

Since she wouldn’t be able to attend an official reveal, and COVID had squashed their plans for a large public event, the painting’s first look took place between Mattingly and Schroeder in the latter’s new home. Viewing a picture sent by Waters, along with a package of items explaining the symbolism, the mother-daughter duo was blown away by “Looking Over the Quad on an Autumn Morning (Note to Ginny).”

“It was pretty emotional because my mother is elderly at this time,” says Mattingly. “It’s a beautiful painting, but it was the way everything just kind of came together in the right way at the right time.”

The next step was to finally give the gift to Pietruszkiewicz and Siobhan. Mattingly arranged for the couple to visit Ginny for a casual hello, but little did they know they would be presented with a picture of the painting made in their honor.

Later that month, Mattingly also arranged a private meeting between herself, Waters and her husband Matthew Graham (Indiana’s Poet Laureate), the Pietruszkiewiczes, Libbert, and two UE students who recorded the event. Todd Matteson, chair of UE’s art department, also attended and unveiled the gift to the university president from behind a purple curtain.

“I’m pleased and honored, honestly, to have three paintings at UE representing three presidents,” Waters says. “Even though I’m an emeritus professor at USI, I’m glad that over the years the connections between UE and USI have only strengthened.”

The story of the determination of four local women to complete a selfless project, even in the face of personal and public health obstacles, won’t ever truly end, but Mattingly tops it off the same way she ended the formal reveal to Pietruszkiewicz — with words about her art-loving mother.

“I wish Mother could be here today, but I know she is in our hearts,” she said at the time. “This would be a most meaningful day surrounded by the people she truly loves and admires, honoring Chris, Siobhan, and the university with a gift made possible by the supremely talented Katie Waters. She would be humbled and honored in being recognized today but would say to each one sitting here, ‘My idea? Yes, it was my idea, but it was all of you that made it possible.’”

Phenom of the Opera