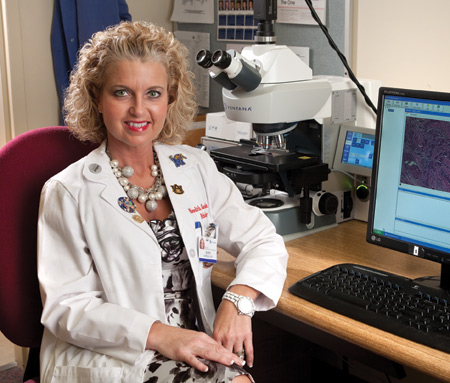 When she was 10 years old, Mary Gamblin set her sights on becoming a nurse anesthetist, following in the footsteps of her maternal grandmother, Irene Lee. But when she announced her intentions to Lee, the inspiring and loving woman looked deep into the young child’s green eyes and said, “You should just go to (medical) school and be a doctor.” Gamblin put so much faith in the words of her grandmother that her future was decided at that moment.
The 39-year-old Judson College and University of South Alabama College of Medicine graduate says she studied pathology — mandatory her second year of medical school — and “fell in love with it.” Third year rotations in the call-driven, sleep-deprived specialties of surgery and obstetrics confirmed her decision. “I needed more sleep than that,” Gamblin says. “They (the hospital staff) would page me and then have to come physically remove me from the call bed.”

Gamblin was recruited by the military and went on active duty as a U.S. Navy pathologist in 2002. Not only did it allow her to travel to Spain and Puerto Rico, she says, “It was a good bridge from residency to the real world.” But Gamblin’s father, Mike Mabrey, had been a naval officer and she knew constant travel wasn’t the life she and her husband Kenny wanted. After Googling the location of Evansville, the Southern born and raised Gamblin told her equally Southern husband, who hails from Memphis, Tenn., “It’s basically Kentucky — we can do that.” She accepted a position as partner at Tri-State Pathology Associates at St. Mary’s Hospital in 2006.

Gone are the 15-hour days of residency and the failed attempts to remove internal organs by standing her 5-foot-2-inch, 120-pound frame on the autopsy table straddling a cadaver. (A Vanderbilt pathologist assistant showed her how to lower the table.) These days, Gamblin and her three business partners (Lori Lynch, Hongyu “Henry” Yang, and Rob Franklin) are in the office at 7 a.m. and generally out by 5:30 p.m., except for the occasional late case or call from surgery to look at a frozen specimen. “Plenty of time to use the gym or play tennis,” Gamblin says.

The mornings can be hectic, with only enough time to gulp down a protein bar before 2 p.m. Partners rotate weekly between grossing (observing a specimen, such as a removed organ or tumor, with the naked eye and weighing or measuring it), clinicals (performing any necessary procedures, including the extremely rare autopsy), and acting as a float to help the others sign out (final diagnosis and cancer staging) as many cases as possible by noon, as oncologists need the information to structure patient care. The float works a half-day to prepare for his or her time off the following week. Each partner generally gets a week of vacation every month — twelve weeks of vacation per year.

The abundant free time simply is a bonus to Gamblin. She is drawn to the challenge of diagnosing and is excited to be part of the patient-treatment path. “We’re the doctors for the other doctors,” she says. “We give them the information they can take back to the patient to treat them.”