The Rise of Rochon 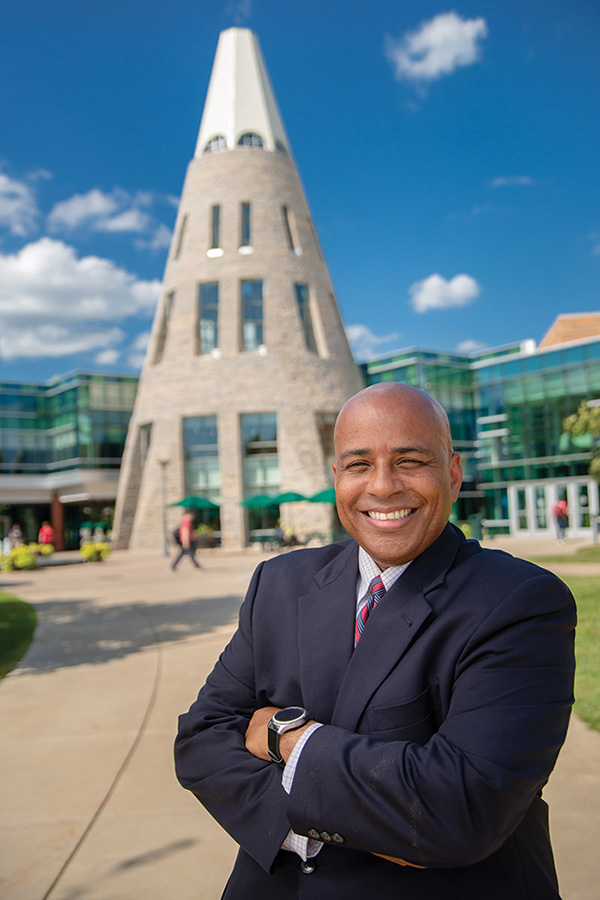 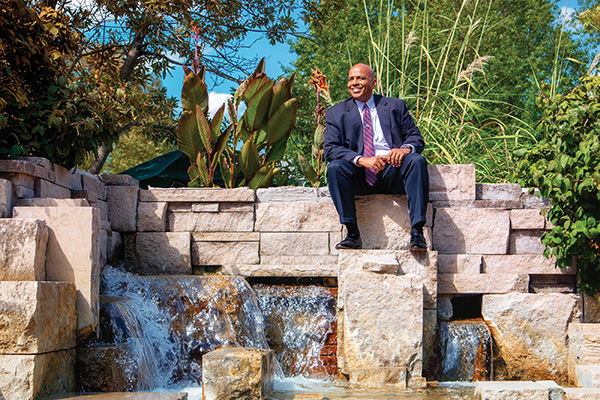 Dr. Ronald S. Rochon was a freshman at Tuskegee University located in Tuskegee, Alabama, when he experienced something that would change the course of his studies and career.

He attended the commencement ceremony that May and was struck by the doctoral students, wearing long, beautiful robes with three velvet stripes on the side, who were being bestowed with academic hoods around their necks by the university president and professors. 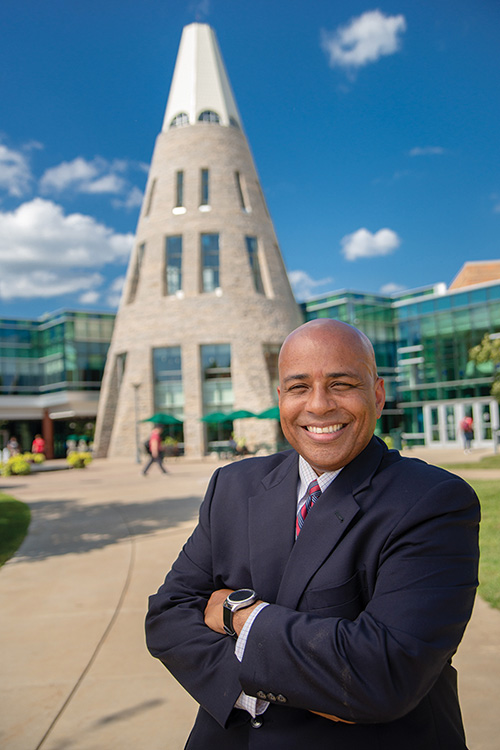 “I remember calling my mother with excitement,” says Rochon. “I said, ‘I don’t know what just happened. I don’t know who those people are or what they just did to get where they are, but I’m going to do it.’”

After finishing his bachelor’s degree in animal science at Tuskegee University, the Chicago native continued his studies and eventually earned master’s and doctoral degrees from the University of Illinois at Urbana-Champaign, in educational policy studies with an emphasis in educational history and policy analysis.

It was during his time pursuing his master’s degree that Rochon determined his biggest career goal — to become the president of a university.

“In graduate school I made that decision,” he says. “I believe in service. I believe in access to higher education. And I also believe in finding ways in which we can reach the brilliance of young people who are often on the margins across our amazing country. In urban, rural, and suburban communities we have amazing talent that sometimes goes untapped, so it links into the overall objective goals and purpose of my work.”

On July 1, 2018, Rochon achieved his goal and officially became the fourth president of the University of Southern Indiana after joining the university in 2010 as provost. He says he was able to develop this dream due in large part to his time at the historically black Tuskegee University.

“Going to Tuskegee and seeing for the first time an institution developed and run primarily by African American faculty and staff was something new and exciting to my narrative,” he says. “It was extremely powerful for my development and also for my career possibilities.” 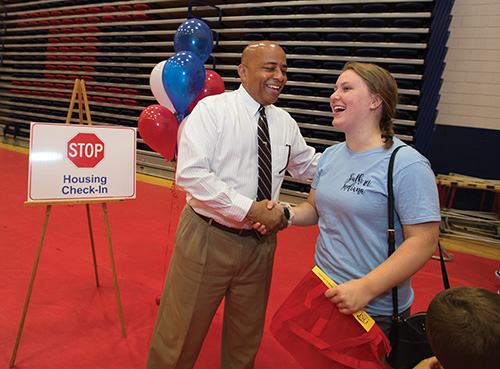 Being the first African American president of USI is an honor not lost on Rochon. He understands the history he now is a part of and the work that led to this possibility. He came into the role replacing the first female university president, Dr. Linda L. M. Bennett, and is part of an institution he says values diversity and equality.

“I think it says a lot about our community — about who we are and what we are excited about supporting,” says Rochon. “The thing I’m trying to teach our students and everyone I come in contact with by example is we have without question overt differences, but those differences, in my estimation, should not be a barrier to get to know one another, to support one another, to engage one another, and also to teach one another.”

While Rochon has been in the upper echelons of the academic world for a while now — before coming to USI he served as the inaugural dean of the School of Education and associate vice president for teacher education for Buffalo State College, Buffalo, New York — the majority of his career in higher education has been as a professor, teaching across the country at Texas A&M University, College Station, Texas; Washington State University, Pullman, Washington; and the University of Wisconsin-La Crosse, La Crosse, Wisconsin. His time as provost included the establishment of USI’s second doctoral program in educational leadership as well as his work to recruit students to campus from all areas of the world. 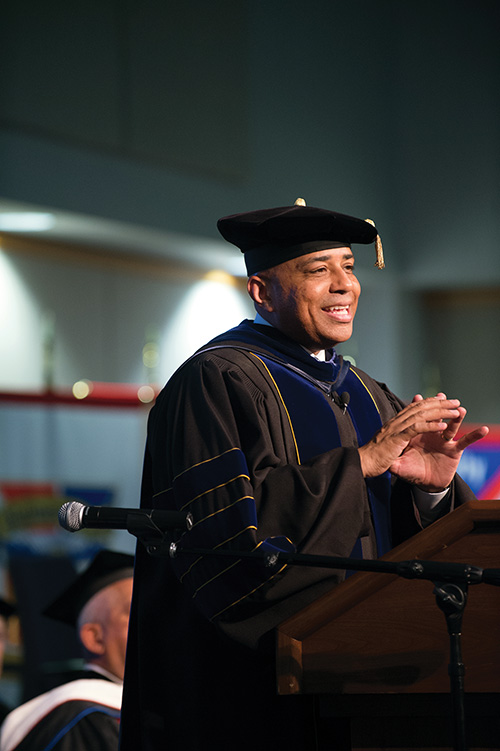 “I had the privilege of traveling to China with Dr. Rochon in 2017 on a trip to recruit students to attend USI,” says Dr. Michael Dixon, interim associate provost for academic affairs at USI. “It was great to work with him in a context outside of USI. His passion for the USI community was every bit as strong there as it is on campus every day.”

Through all of his roles in academia, the most important to Rochon is the role of educator. Dr. Ann White, dean of the College of Nursing and Health Professions at USI, says she continues to be impressed by his commitment to students. She recalls about four years ago the death of a senior nursing student in a car accident three months before graduation, leaving behind devastated students and friends.

“His compassion for all of us and his speaking with those students was amazing,” says White. “He understood they were hurting and did his best to acknowledge their grief and support them. We later posthumously presented her diploma to her mother, and his compassion and concern for the family helped in a time of great sorrow.” 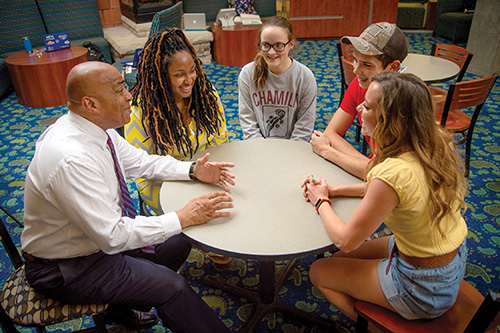 Nothing shows off Rochon’s interest and compassion for students like taking a walk around USI’s campus. On a sunny day in August, he stopped several times to talk to more than 20 students during a trek across the university, encouraging them on their academic journeys, taking pictures with them, and giving them tips about university activities.

“That is part of my job as an administrator, but also part of our job as university faculty and staff — to bring students to our campus and to provide them with exposure to amazing, discoverable opportunities,” he says.

Now, a few months into his position as president, the professor has become the student once again. While Bennett left behind big shoes to fill, Rochon says he knows his job now is to find his own gate and stride to continue finding ways to enrich students’ lives and making higher education accessible to everyone.

“I’m learning a lot,” he says. “I’m drinking from a fire hydrant right now that’s on full blast, but the water I can taste is clean; it’s clear; it’s plentiful; it’s refreshing; and it tastes real good.”