The Shows Go On 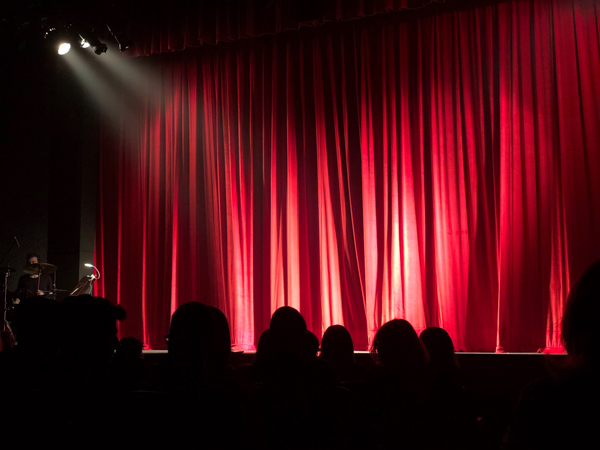 As we swiftly approach the two-year anniversary of the COVID-19 pandemic arriving in the Tri-State, area theaters have hurdled multiple obstacles. First closing their doors, then performing to a live-feed camera and empty seats, Evansville’s thespians have now largely returned to the stage. For the end of the 2021-2022 season, local troupes are springing back into action to tell thoughtful stories both familiar and new.

The University of Evansville Theatre

With the intimate setting of the May Studio Theatre and the in-the-round Shanklin Theater, the UE theater department gives its audience members a range of performance styles to choose from. This season wraps up with one student-directed show and one alumni-directed show.

“The Caucasian Chalk Circle” by Bertolt Brecht and translated by Eric Bentley will be directed by Obi Roberts, a senior theater performance major, from Feb. 24-27, in the May Studio Theatre. Written at the end of WWII, this play is teeming with political overtones and offers a sharp view of human nature through the story of a child claimed and fought over by two women.

“Heroes of the Fourth Turning” by Will Arbery is a 2020 Pulitzer Prize finalist in Drama centering on four graduates of a conservative college whose reunion spirals into chaos over spirituality, politics, and a nearly fanatical desire to be understood. This haunting play, guest-directed by 2014 UE Theatre alum Dylan Frederick, will run April 8-9 and April 21-24, in Shanklin Theatre.

Tickets can be purchased at the box office inside Hyde Hall or online at evansville.edu/majors/theatre/current.cfm. Audience members are required to wear face masks and must show proof of either COVID-19 vaccination or a negative test result within 48 hours of the show’s date.

The University of Southern Indiana Theatre

Showing from Feb. 17-20, “Stop Kiss” by Diana Son features Callie and Sara, who unexpectedly fall in love. Their first kiss provokes a violent attack that transforms their lives in a way they could never anticipate. The show is directed by Associate Professor of Theatre Eric Altheide.

From April 21-24, see the romantic comedy that is William Shakespeare’s “Twelfth Night.” Directed by Professor of Theatre Elliot Wasserman, it is the second Shakespearian work to take place at the USI Performance Center.

Tickets can be purchased online at usi.edu/liberal-arts/usi-theatre/ticket-purchase. Masks are required when inside on USI’s campus.

Founded in 1925, the Civic Theatre is Evansville’s first community theater. While it’s been creative with venues this past year, two of its three final shows will take place on the main stage.

Kicking off its spring season is a staged reading of Susan Rice’s “Not Someone Like Me” from Feb. 17-20 at the venue’s underground theater. Directed by Megan Leavitt (who was featured on the cover of Evansville Living’s March/April 2021 issue), this production brings to life five true stories of sexual abuse and explores how speaking out against abuse turns victims into survivors.

From March 3-6, see “Gum & the Mother of Modern Censorship” by Karen Hartman. Directed by Jasmine Withrow, this staged reading is a violent fairy tale about two cloistered sisters discovering new appetites in a fiercely restrictive society. “Gum” takes place in a fictional fundamentalist country, inspired by a true Egyptian scandal.

The staged version of George Orwell’s “1984” adapted by Robert Owens, Wilton E. Hall, and William A. Miles will run from April 1-3 and 8-10. Enter a harrowing, imagined future in which Winston Smith, a government employee who rewrites history by order of the country’s leaders, gets caught desperately searching for love and freedom in a society of intense distrust and violence.

“Into the Breeches!” the latest script by American playwright George Brant, depicts the director and leading men at Boston’s Oberon Play House heading off to war with the Axis in the 1940s. Determined to keep the house lights up, the director’s wife attempts to produce an all-female version of William Shakespeare’s “Henriad,” lending new credence to the popular refrain “the show must go on.” This comedy will show from May 20-22 and 27-29.

Tickets to Evansville Civic Theatre performances are general admission and first come, first served, with building capacity limited to 50 percent. They can be purchased at the box office at 812-425-2800 or online at evvcivic.org/buy-tickets.