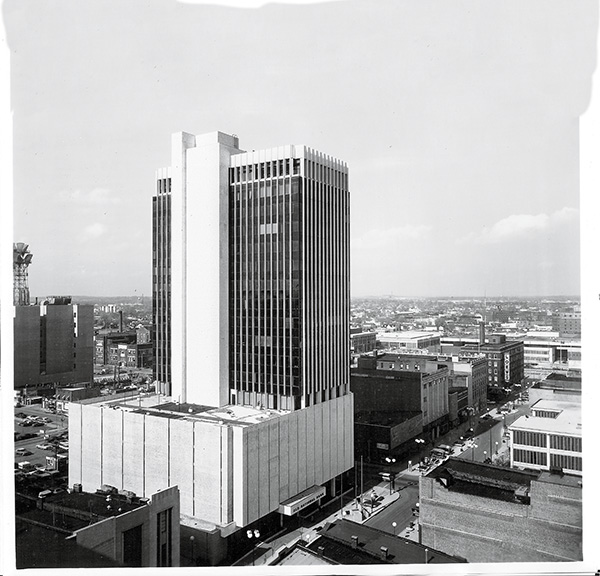 Look at the skyline of Evansville and you can’t miss the goliath that is the Fifth and Main building.

Towering over Downtown at 248 feet (18 stories in total), the building is the tallest in the area for at least 120 miles. It is touted as Evansville’s first true skyscraper. Completed in 1970, it was a marvel for all in the city to lay eyes on. However, since 2004, the building has sat nearly vacant; the former headquarters for Old National Bank has seen few tenants take up office space since the bank moved to its new riverfront location.

Through its history, the giant structure has changed the face of Downtown and the city. Now, as a major renovation is on the horizon for the newly named Fifth and Main during its 50th anniversary, Evansville gears up for a bright new future for the tower in the sky.

“Things are Looking Up”

Before the late 1960s, the 400 block of Main Street was very different. On the western side of the street, the Old National Bank headquarters sat snug against several other buildings, including the Hotel Lincoln and Tharling Studios.

ONB was no stranger to constructing new, modern buildings Downtown. Its former headquarters (which stood next to the current 420 building) also was considered a skyscraper during its time. Built in 1916, the structure rose eight stories above the streetscape and the architecture was described by The Bankers Magazine of New York as “adapted and composed (to express) the strictly modern, aesthetical, utilitarian, and ideal requirements of a bank and office building.”

But after 50 years, ONB was ready for a new space. Downtown Evansville was moving toward modernization in the 1960s with the completion of the Civic Center Complex in 1967. In October that year, ONB officials jumped on the movement with a large announcement held at the Hotel McCurdy. Early plans had the building reaching 18 stories — the tallest not only in the city, but in the region — and costs expected at $5 million. The entire structure included 240,000 square feet of floor space and a parking garage. 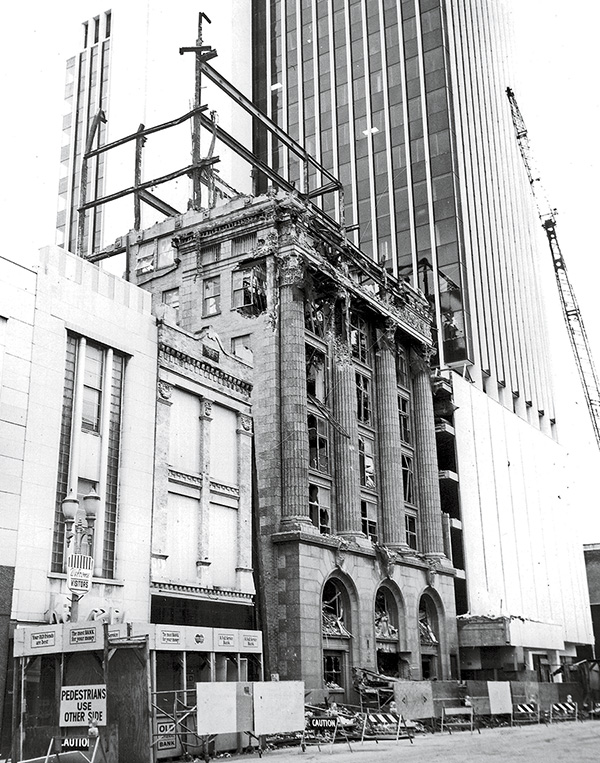 Taking on the construction were designers, builders, owners, and developers Jack W. Kelley and Thomas F. Marshall of Oklahoma City, Oklahoma. They dubbed the tower the Old National Bank Building, giving the bank offices on the ground level, downstairs floor, and sixth and seventh floors. A terrazzo floor was sketched out for the first floor and each elevator lobby was set to have marble wall finish.

“This is tangible evidence of our belief in the revitalization of the central core area,” ONB Chairman Walter A. Schlechte said at the time.

Officials wasted no time getting started on the building. On a chilly Dec. 15, 1967, Kelley, Chamber of Commerce President Leland Feigel, Old National employee and City Councilman Ben Evans, and Schlechte took shovels to ground, turning over the first bits of dirt for the building.

Construction went smoothly in the first year. Schlechte reported to shareholders in January 1969 the office building was on schedule, with a move-in date expected later in the year. By May, the roof was poured and a “topping out” ceremony commemorated the progress — nearly 2,000 residents crammed Main Street to see the large crane on top of the building raise a tree to the top floor. Music was played and speeches given while a balloon drop rained down hidden $5 gift certificates on those watching.

Seven months later, the modern marvel of Evansville’s Downtown skyline opened. The entire structure occupied a quarter of the block when completed and dwarfed its predecessor, which was razed after 420 Main St. opened.

“It just stood out as something very different for Evansville,” says ONB Chief Credit Executive Daryl Moore, who started with the bank nine years after the 420 Main St. location opened. “I can remember the first time I saw it. Driving into the city, I saw the building and thought, ‘That’s where I want to work.’”

Reports from the opening in 1970 stated the building had all the modern trimmings and even the bank’s vault looked like a “doorway to a space age hideaway.” It was the start of a new era for not only Old National, but the city as well.

“What really stood out to me when I started working there were the two very huge, ornate wooden doors on the sixth floor that we opened in the morning to go into the executive floor,” says Moore. “It was really fun to be in that building.” 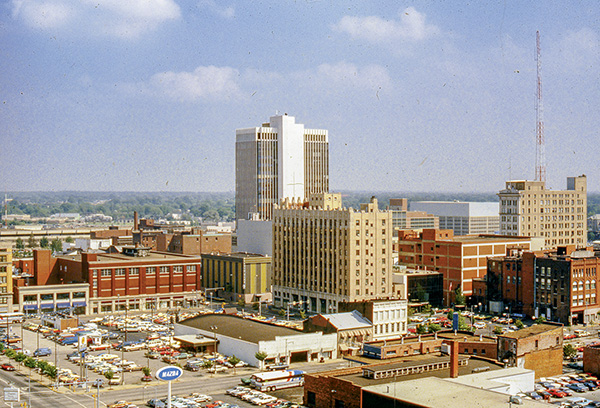 The tower thrived with Old National as its anchor for 34 years, even welcoming in the popular Petroleum Club to its 17th and 18th floors.

“At the time, it was the top restaurant in the city when you wanted to go somewhere elegant,” says Alan Shovers, former member and chairman of the club. “It was special for its time.”

Started in the 1940s, the Petroleum Club called the McCurdy Hotel and Citizens Bank building home before coming to the top of the Fifth and Main tower in 1970. The club still is remembered as the place to be for businessmen and women of the community, with its panoramic views of the river and excellent staff, including the ever popular maître d’ Tommy Wilson.

“It was a place you would take people if you were trying to make some sort of business deal,” says Shovers. “Many people took clients there to impress them.”

“At night, the Petroleum Club was a special place to be,” adds Moore. “You could look out over the city, the food was great, and the service was great.”

Time took its toll on the building, however, and the beginning of what seemed like a dull future began in 2004, when Old National moved to a new headquarters on the riverfront.

“Our preference would have been to stay in the building just because we had such a history there,” says Moore. “The building had deteriorated to such a state that just wasn’t commensurate with what we thought it should be with the bank.”

Talks between ONB officials and the property owners could not find a common agreement to keep the bank from leaving. The absence of ONB was felt sharply. In 2006, the Petroleum Club shuttered its doors, giving way to dipping numbers and the falling trend of private club dining.

Over the subsequent years, the tower located at the corner of Fifth and Main streets began to reflect differently in the eyes of Evansville. 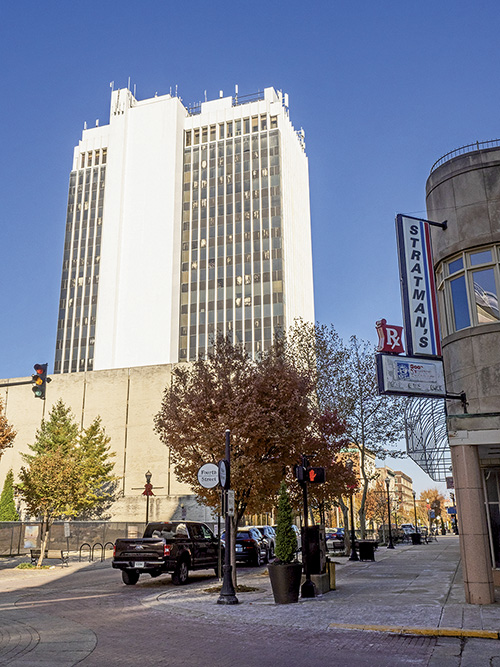 A Quiet Present and Bright Future

Today, the Fifth and Main tower looms over Downtown like a sleeping giant, a relic of its former life. Each of the 18 floors tells a different story of what was. While a few tenants still reside on several of the building’s floors, many more are vacant, showing signs of wear and attempts at renovation over the 15 years since Old National’s departure. In all, only about 20 percent of the building has remained occupied in recent years.

In February 2019, Eric Doden of Domo Development out of Carmel, Indiana, was asked by local economic leaders to visit the region. It wasn’t his first trip to the city; over the years he had become familiar with Evansville’s economic development work.

“I really saw Evansville as one of those up-and-coming markets,” says Doden, who visited the city often during his time as president of the Indiana Economic Development Corporation.

He also has a background working in cities of Evansville’s size as the former leader of economic development at Greater Fort Wayne Inc. The trip in February showed him one opportunity too big to pass up.

“I kept coming back to Fifth and Main and that was the one site that got me really excited,” says Doden. “It’s clearly a core asset of the community, and we like to do development where we can make a return but we can also make a difference.” 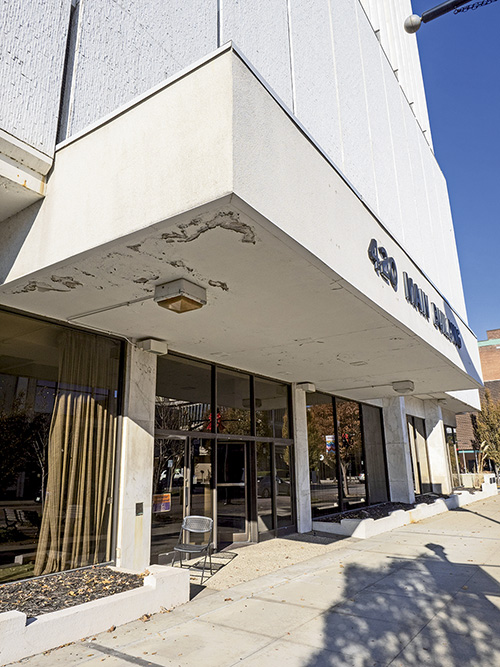 “Domo understands the need for catalytic development. They get the vision for smaller cities — the need for targeted investment and community-minded players,” says Candace Chapman, executive director of the Downtown Evansville Development Corporation, who encouraged Domo to consider developing the tower. DEDC is a nonprofit working closely with the Downtown Economic Improvement District, and serves as a “matchmaker” in Downtown real estate, helping people and businesses find a perfect fit in Evansville.

Currently, Domo is working with Hafer Architects on the design for the redevelopment work. The group’s plan is to make a mixed-use structure — the bottom floor open for retail and restaurant space, a community space on the sixth floor utilizing the open terrace roof, office space on floors seven and eight, and then approximately 68 apartments on the remaining floors. The hope is to start work in April 2020 and open the building in summer 2021.

“We know when we revitalize this, it will be a 40- to 50-year project. We want it to look good for a long time,” says Doden.

With Domo Development coming into Evansville, the hope is it will initiate even more developers to throw their hats into the Evansville market as well.

“We’ve had a lot of people over the last decade who have laid the groundwork for growth, but there’s still going to be more work to do after Fifth and Main,” says Chapman. “Just like curb appeal makes individuals proud of where they live, Fifth and Main will enhance our city’s curb appeal.”

“It makes me feel really good not only about the building, but about the city,” adds Moore. “Having that new ownership coming in and getting people back in the building is exciting.”