In the U.S. in 1840, President Martin Van Buren, the country’s eighth president, served his final days in office and was succeeded by Whig Party nominee William Henry Harrison. The Civil War wouldn’t begin for 21 more years. Across the pond, Queen Victoria wed Prince Albert, and later that year, welcomed their first child, also named Victoria. And in Sprinklesburgh, Indiana, (which would become known as Newburgh the year following) four lots were purchased by merchant and contractor A.M. Phelps.

Since 2017, Scott and Claire Bosma have been caretakers of the historic Newburgh property on Main Street, but for Claire, the home has played a central role in her life for much longer. Her parents, Steve and Vicki Nienaber, purchased the property in 1985, and Claire grew up in the historic home, walking to Newburgh Elementary School, buying candy cigarettes at the Newburgh Country Store, playing along the river, reading at the library, and riding bikes to the Newburgh Community Pool.

“This has always felt like another sibling — the house,” says Claire. “It’s just been so integral to my childhood and growing up here. It was a great, great place to be a kid. I always knew I felt drawn to come back here.”

Before the red brick home became what it is today, the house began as a modest two-room structure built by Phelps on the four lots. He then sold the property 15 years later to Jacob Fickas. Today, the home sits along downtown Newburgh’s Main Street, but when Fickas purchased the property, Main Street didn’t exist. Instead, a separate one-and-a-half-story structure was built into a hill with the entrance to the north, facing away from the river.

In 1860, Union Bethell purchased the property and completed massive improvements, including digging out the hill on the south side of the home (which would later become Main Street) and making the home a full two-story structure. Bethell also joined the two-story home to the original two-room building by a hallway. It was during this time an extension was added to the west of the property to house the managers of Bethell’s tobacco factory and flour mill. 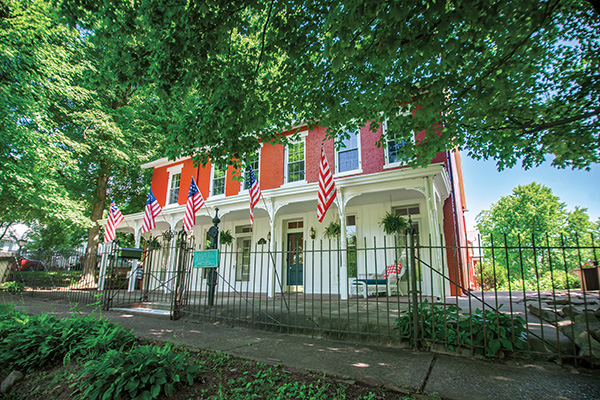 The Bethell family owned the home until 1915, when it was sold to Addison Igleheart to use as a summer house and who named it Wake-Robin after the wake-robin flowers that grew on the property. Following Igleheart was owner Daniel Ortmeyer, who added central heating and electricity. Then, the home was sold to Milford Miller, an attorney from Evansville. During the late 1940s, Miller began a correspondence with Union Bethell’s son, Frank H. Bethell, to learn more about the almost 100-year-old home and made more improvements to the bones of the property.

The third and final addition to the home was in 1972, when Dr. Ronald W. Sowa built a new kitchen on the north side of the property with a billiard room underneath and added a pool to the backyard. After the Sowas, the house was put up for auction. Claire’s parents decided to take a look, even though the family of seven already lived in a home right down the street, and left as the new owners.

“They preserved Wake-Robin for the next generation,” says Claire.

Moving into an almost 180-year-old home comes with its own set of challenges, but for Scott and Claire, those challenges also were combined with the need to make the home their own. Before taking ownership from her parents in 2017, the families decided to split the original four lots down the middle so Claire’s parents could build a new home next door with the help of Scott, a third-generation general contractor.

“When I was little, we used to live in north Newburgh, and we always had family around us,” says Scott. “Some people would kind of cringe when you say you live next to your in-laws, but when we were little, that wasn’t uncommon. It feels right.” 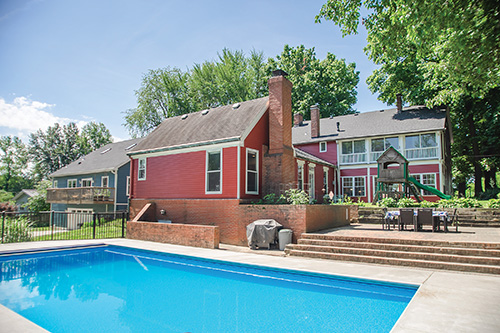 Since moving in, Scott and Claire, who works as the business development officer for Orthopaedic Associates, have done extensive renovations to the house not only to make it their own, but also to modernize the historic home to make it livable in the future.

One of the first projects Scott and Claire completed in the house was the renovation of the master suite. While Claire had always known the master to be upstairs, they noticed the breaker box in the basement was labeled differently. The downstairs space that had always been a den, office, and full bathroom throughout her childhood were labeled as a master suite. Converting that space back into a master suite would give Scott and Claire more space, free a room upstairs to be a guest room, and allow them to turn another bedroom into a toy room for their two boys, 7-year-old Henry and 5-year-old Simon.

They also redid the pool by taking it down to its original cinder block hole in the ground. The kitchen was completely remodeled to give the space a new flow and brightness. Wainscoting was added in the dining room, and work was done on the laundry room and downstairs half bath. Scott and Claire joke it would be easier to talk about the rooms they haven’t worked on — only two in the whole house.

Of course, with any old home, there is no shortage of projects to be done, and Scott and Claire have a wish list of undertakings they still want to complete, like working on the billiard room, installing a widow’s walk on top of the house again (which had to be removed when Claire’s parents owned the home due to leaking), and rehabbing the barns in the backyard.

“The trick is you want to keep it to where it fits the house, but you don’t want to over do it,” says Scott. “You don’t want to make it a fancy Victorian house when it’s not.”

“I’m proud of the fact that, when my siblings come back, my sister says, ‘You know, it’s different, but it still feels the same.’ It still feels like home to her,” says Claire. “That was really important to me. I feel like we’ve kept it true not only to the memories of my childhood but to the integrity of the house as a whole.”