Time for an Overhaul 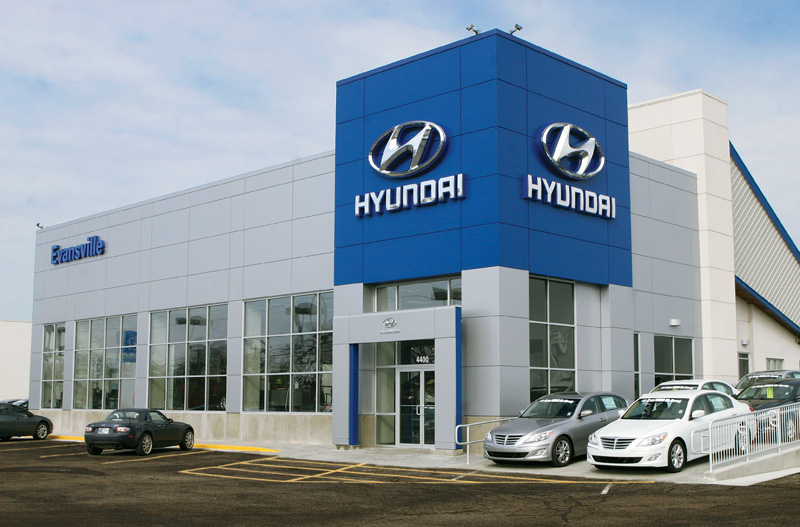 When Doug Duell and his family purchased the Evansville Hyundai auto dealership in February 2011, they knew the facility lacked individual offices in which to conduct business.

There were other problems, too. The tiny, dated showroom could only hold two vehicles, and salespeople had only one room for all their personal items.

That’s not the case anymore. The recent $1.2 million remodeling of the auto dealership just off of the Lloyd Expressway now offers customers and staff a beautiful, welcoming showplace large enough to hold eight vehicles. The Duell family also hired four more salespeople as a result of increased business.

Doug Duell says the renovations started after the dealership had turned sales around, which took only about 10 months under the family’s ownership. Duell attributes the rapid turnaround to some aggressive advertising as well as changes in the business model and procedures. Being locally owned and operated also helped give the dealership a more positive image in the eyes of local consumers, especially since the Duell family already owned and operated an existing business with a great reputation — Evansville Kia Mazda Volvo, just down the road from Evansville Hyundai.

“Everybody deserves, and will do their best in, a better work environment,” he says. “(The facility) really wasn’t designed to do what it had been doing.”

That said, the overhaul was not mandated by Hyundai, which is often the case when a dealership undergoes a major remodeling. Yet Duell says he knew the store would need a redesign if it were to grow and continue to be successful.

Now, for instance, the showroom is able to showcase the wide range of vehicles offered by the manufacturer. These include lower-cost compact vehicles like the Accent and the luxury level Equus sedan.

One of the first things a customer will notice when entering the dealership is a short flight of stairs in front of the showroom floor. The raised foundation was part of the original building’s design and was something that had to be worked into the new construction, Duell says. That raised foundation created some issues in putting the structure together. “It really came out great, but it took a lot of design work,” he says, adding that Jack R. Kinkel and Son Architects, based in Downtown Evansville, provided design assistance.

There were other challenges to the overhaul as well. The summer of 2012 was one of the hottest on record in the Tri-State, yet because the showroom had been torn down, the staff was required to work from a tent and a rented trailer in the extreme heat. Duell estimates his staff went through 10 cases of water a day trying to keep everyone hydrated. The dry summer, meanwhile, helped construction move along quickly.

“I never envisioned it would be so hot,” Duell says. “It was very physically challenging for (my staff), and they did a great job. We’ve got some troopers.”

Amish Patel, Evansville Hyundai’s vice president and Duell’s partner in the store, says everyone was extremely pleased with the new showroom despite the fact that they had to work outside in the heat.

“It’s better than what we envisioned,” he says.

Patel says customers are almost always immediately drawn to the dark stone walls accenting both ends of the showroom. In fact, many customers will walk over and actually touch the stone. The slate-gray, textured surface gives the showroom a stately and sophisticated feel. At the same time, it also makes the space warm and welcoming.

Giant photos mounted high on the showroom walls also catch customers’ attention. These are not stock photos of vehicles. Instead, they are more modern and artistic. Their brilliant colors demand to be noticed, and the prints have even garnered the dealership some attention and praise from Hyundai itself.

“One of our corporate guys came down whenever it was all done to check it out, and that’s when he took pictures of it and submitted it to his bosses,” Patel explains, adding that the manufacturer wanted to be able to refer other dealers to the same business that provided the prints to Evansville Hyundai. “We’ve had some calls from the manufacturer that we were excited about.”

The large-format photos were taken by Innovative Media in Detroit, Mich. An avid drag racer for almost 20 years, Duell learned of the company through a racing colleague. Everyone liked the prints so much that Duell decided to put some in the showroom of Evansville Kia Mazda Volvo as well. Innovative Media supplies similar photos to all the Mercedes dealerships in the United States.

Bryan Mann, a salesman at the dealership, describes the new showroom as “wonderful,” and adds, “It’s probably the nicest, most state-of-the-art showroom around the Tri-State.”

Patel and Duell agree that Evansville Hyundai’s service department will also be up for some major changes very soon because of increased business. The dealership sells more than 100 new and used cars each month.

For Duell, these changes are more than just investments in the dealership. He wants to create a place where members of the community will enjoy conducting business. He also wants them to be proud to do business at Evansville Hyundai.

“Our customers deserved more,” he says. “Having a showroom that is welcoming and appealing gives a customer a place to come in and buy a car that they really can take ownership of and feel proud to buy a car there. It’s their dealership.”

“We’re very fortunate to have the success we have in business, so it’s very important for us to give back to the community,” he says. Both Duell dealerships, for instance, are major contributors to the Santa Clothes Club and the Albion Fellows Bacon Center.

“I really, truly love this area,” he says. “I wouldn’t live anywhere else.”