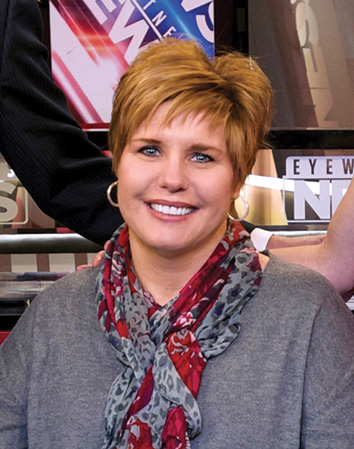 The 48-year-old Newburgh, Ind., resident has had a few “interruptions” along the way. On January 31, 2010, Rolley and her sister were sledding with their kids when the Rolleys’ tube struck a tree. Her head and back slammed into the tree, fracturing her spine and paralyzing her from the sternum down.

But as home renovations were underway on Oct. 18, 2011, Rolley discovered a lump in her breast. When cancer was confirmed, Rolley battled serious infection and chemotherapy. Now more than two years after Evansville Living featured Rolley (“Strength in Numbers,” March/April 2012), she says she’s feeling great.

“Finally in 2014, I finally feel like I can start living again, after being paralyzed, after all that yuck in the past,” says Rolley, who has accepted the title of the adult Easter Seals representative. “To be able to go, do, last all day, and not feel like I’m sick or have to be down for a while — I’ve had such wonderful friends and family who have helped me along the way.”

The mother of four says her children — Will, 14, twins Isaac and Ellen, 13, and Sam, 11 — are her constant motivation to keep going.

Rolley continues therapy at Easter Seals Rehabilitation Center for an hour twice a week with her physical therapist Patty Balbach, who has been with her since the very beginning. The pair works to strengthen her core and endurance.

“Christy is a perfect example of someone who didn’t think they would ever need Easter Seals, and maybe didn’t know about all the services we offer here,” says Pam Kirk, director of marketing and community relations at Easter Seals Rehabilitation Center. “Her situation is a reminder that it can happen to anyone.”