To ease the grief of losing her daughter, Kris Proctor created Katie’s Caps

Katie Proctor-Schiff was at a family gathering when she complained of a severe headache. Her mother, Kris Proctor, described the 35-year-old as someone who “had never been sick a day in her life.” But on Oct. 12, 2021, two days after her symptoms started, the Evansville native died suddenly of a glioblastoma tumor, leaving behind her husband Jake Schiff and three sons, Weber Allan (8), Morris Jacob (6), and Payne Frederick (4).

A longtime owner of the former Pen Pals Stationary Shop and Knit Wits Yarn Shoppe with her mother, Proctor-Schiff was “the perfect daughter,” says Proctor, whose only child was Katie. 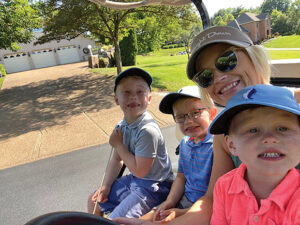 A lifelong knitter, Proctor began crafting winter hats to keep her grief busy. She gifted them to her grandsons, who gave some to their friends, and word spread. Jenny Mitchell, who crochets online as Aunt Jenny’s Knits, and Rhanda Stewart-Carlile teamed up with Proctor to produce more hats. Her grandson’s teachers at St. Joseph Catholic School in Newburgh, Indiana, and later St. Wendel (Wadesville, Indiana) and Corpus Christi (Evansville) schools, held yarn drives and donated to the organization now operating as Katie’s Caps.

According to the American Brain Tumor Association, Katie’s Caps has raised more than $6,700 for research on glioblastomas, one of the most aggressive and fast-acting tumors. Proctor’s goal is to reach $12,000 by the one-year anniversary of her daughter’s passing. 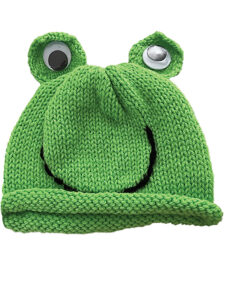 “If I can just make one bit of difference and save one mother or one child from losing a mom, that’s all I would hope and pray to do in the years I have left,” she says.

Winter hats are sold for a minimum $25 donation along with various baseball caps from Kate Potter at American Honey in Darmstadt, Indiana. Katie’s Caps also sells Katie’s Crew bracelets for $5.