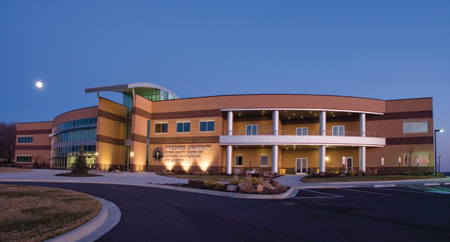 Dennis Wilzbacher came out of retirement to join the team of professionals at Vincennes University’s newly constructed Gibson County Center for Advanced Manufacturing and Logistics, located along U.S. Highway 41 on the south side of Fort Branch, Ind. Along with the efforts of everyone at the Center, which opened on Aug. 24, 2011, Wilzbacher hopes to shed light on what he sees as an avoidable problem in the United States. “I just really have a lot of concerns about where America is with its energy policy,” he says. “We rely way too much on foreign oil, and we can produce crude oil from coal very easily — people do it all the time.” He was drawn to the new facility because of the many opportunities he saw for advancement. “I hope to do a number of things here, training-wise,” he says, “in not only coal energy, but other forms of energy — renewable. There’s just all kinds of things we can do with a neat facility; it’s kind of like a blank canvas.”

As the coordinator of heavy equipment training, Wilzbacher oversees the programs offered in the Center’s coal mine simulator lab — a room designed to look and feel just like the underground world of mining. Trainees are required to wear appropriate gear and hardhats at all times in the room, just like they would while operating a roof bolter underground. With the lights off, headlamps are the only illumination, and any communication has to be shouted over the roar of the equipment.

Wendy Coles, who guides trainees through the roof bolter, front-end loader, and haul truck simulations, explains the purpose of the program. “My goal for this class is to teach them the controls of the equipment,” she says. “I’m not going to make them experienced operators by any means.” However, the training individuals receive in the hands-on environment is extremely valuable. “Training costs for a coal company are about $10,000 a day,” Coles says. “It takes about 20 days to make a new worker productive, but every day it’s going to cost a company about $10,000. So every day we spend here with them (the trainees) is just an added bonus to the coal companies because when they leave here, they at least know the controls of the equipment — that’s day one and day two of learning when you’re underground.”

The coal mine simulator lab is one feature in the impressive facility, which cost $12 million and was paid for mostly by state and federal dollars. From other hands-on training stations to traditional lecture halls, the 57,000-square-foot building offers students and trainees 21st century technology relevant to the fields of study the Center offers.

Victor Chamness, the facility’s director, especially is proud of the industrial maintenance room — a large, open hall with equipment lining the walls. The idea behind the room is to improve industrial workers’ competency in handling their own work environments — something that Chamness feels isn’t stressed enough in industrial workplaces. “No matter where you go, if you have a building about this size or bigger, you have a lot of maintenance that goes with it, with control rooms, heating and air, etc.,” he says, “especially at factories. Toyota and UTech, nearby, they have tons of machines that are operating everything, and so the maintenance people need constant training — especially when you’re bringing new people in — on how to operate and also maintain the equipment.” Chamness explains that industrial maintenance room training will result in work environments that are more comfortable, efficient, and safe.

The room features several devices that simulate industrial equipment, including hydraulics, motor controls, and mechanical drive systems. There’s also a program logic controller (PLC), a series of computers that have been partially dismantled and rearranged across a table for inspection and practice. This month, the Center is hosting a three-day heating and air-conditioning training program. The people they are sending out into the workforce, Chamness says, need to know how to be more efficient at their jobs and how to control a more comfortable work environment.

The training programs in the Center go beyond the building itself. Adjacent to the south side of the parking lot, VU owns a large field that will one day function as training ground for industrial machinery, such as Caterpillar heavy equipment.

Every training program — classes ranging from three-hour sessions to full semesters — revolves around the facility’s emphasis on advanced manufacturing and supply chain logistics, and they’re also offering general education classes so students can complete an associate degree without commuting to Vincennes. This August, some of these classes will be recorded at VU’s main campus and played live in the lecture halls at the Center via cameras that follow the professor in the classroom. There also will be an option for students in Fort Branch to ask questions in class across campuses.

The Center, which has already cultivated a great deal of excitement in the area, hopefully will continue to add to the Tri-State’s growing industrial presence. “So many times we educate our young people, then they go to the East Coast, West Coast, bigger cities to be employed,” Chamness says. But the training the Center offers should help people in this area see opportunities that arise out of an associate degree or more knowledge of a particular craft. Chamness hopes to offer more non-credit classes. “If someone wants to take a computer class,” he says, “then we can offer that and they don’t have to pay the full tuition price.” Ultimately, the classes the Center offers will depend on the industrial community’s wants and needs.

For more info, go to www.vinu.edu/gibson.