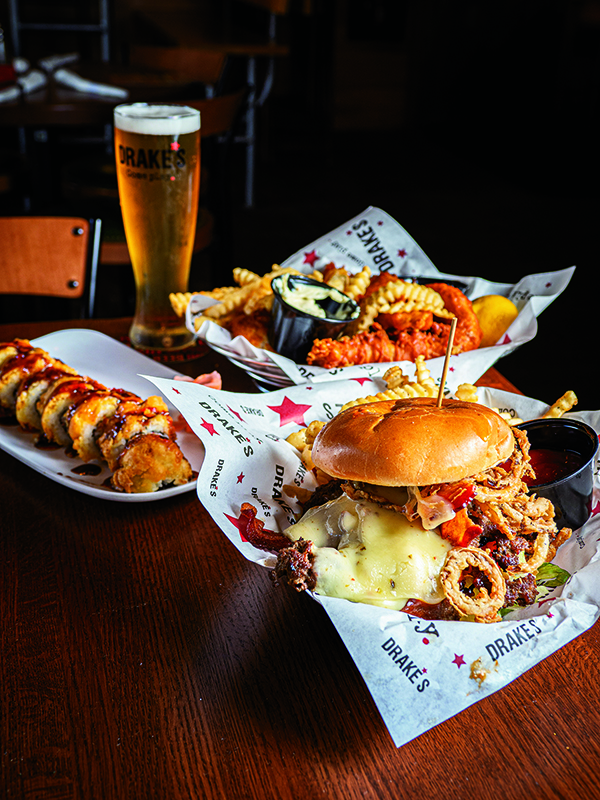 Many chain restaurants fill their menus with common but complicated and overpriced dishes, but Drake’s keeps it simple and sticks to what it does best — beer, burgers, and sushi.

Originating in 2007 in Lexington, Kentucky, Drake’s is owned by Bluegrass Hospitality Group and has since expanded to 18 locations across Kentucky, Tennessee, Indiana, Alabama, and Illinois.

The Evansville location at 1222 Hirschland Road opened in December 2020. Drake’s features a diverse menu focused on their three best-selling items: beer, burgers, and sushi, running a special every month.

“There’re not many places you can go and eat siracha wings, a burger, fries, and get a sushi roll in one order, while drinking craft beer,” says Manager Zach Rhodes.

All of Drake’s sushi — including its popular Crab Rangoon roll — is rolled in house by Aqua, a separate entity owned by Bluegrass Hospitality that works exclusively in BHG restaurants.

For diners more in the mood for cooked dishes, Drake’s fried fish is coated with an in-house beer batter that Rhodes says makes it his go-to meal.

Along with its unique food menu, Drake’s offers 24 draft beers — 21 of which are craft — including its own Drake’s Lager brewed by Goodwood Brewing in Louisville, Kentucky. Drake’s also runs a $5 special each month on its seasonal cocktail menu, which features indulging spices and flavors.

“We like to offer a unique selection, something you can’t go to any restaurant and get,” says Rhodes.