The face behind the oldest continuous manufacturing business in Evansville is an owner who has been alive only for a quarter of its tenure.

When the International Revolving Door Company’s previous owner Rahmi Soyugenc died in 2014, 24-year-old University of Southern Indiana student Josh Kratochvil fulfilled a lifelong dream of owning a manufacturing company when he purchased the business in 2015.

The significance of owning the world’s oldest and largest revolving door manufacturer isn’t lost on the youthful Kratochvil, who spends part of his Tuesdays and Thursdays studying accounting at USI. Originally formed as a division of International Steel Company, the business began in 1907 producing doors for Theophilus Van Kannel of Philadelphia, who was granted a patent for his unique revolving door design in 1888. Owning the company that has installed revolving doors in more than 6,000 locations around the world is what Kratochvil calls “truly humbling.” 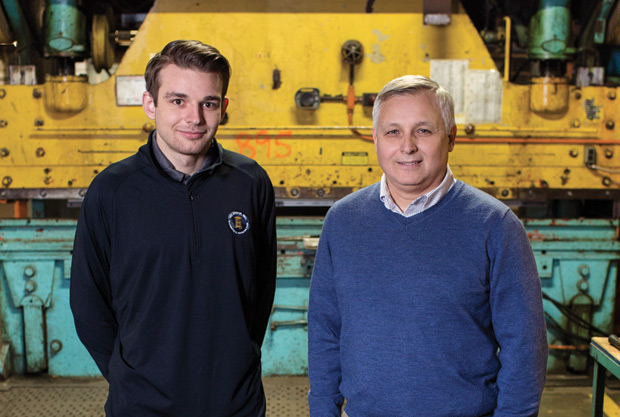 ▲ Father and son team Josh and Jim Kratochvil purchased the International Revolving Door Company in July 2015. Josh, a 24-year-old University of Southern Indiana student, credits his father for his entrepreneurial nature because he grew up watching Jim work as a former chief financial officer of Berry Plastics.

“I’m down here 70 to 80 hours a week,” says Kratochvil, a Evansville West Side native who attended F.J. Reitz High School. “I know the culture I want to establish here. I am 24, but I have to lead people. I’m the age of a lot of people who work here’s grandchildren, so I have to be here more than they are and I have to work harder than they do to earn their respect. I tell them if they’re loyal to me, I will be loyal to them.”

In July 2015, Kratochvil purchased International Revolving Door Company with the help of his father Jim Kratochvil, former chief financial officer at Berry Plastics, through an online auction with Curran Miller Auction-Realty. The purchase also included the 130,000-square-foot building located at 2138 N. Sixth Ave., blueprints of every revolving door designed and installed, Evansville Metal Products, a second company Soyugenc owned, all of the supplies and equipment, and more.

“When I walked through here, I saw unlimited potential,” says Kratochvil, who credits his college advisor Tim Mahoney at USI for encouraging him to look into purchasing the company. “Even if I stripped everything down for scrap price and rented out the building, I could still make money. When you have a building this size and you get it for a good price, you have endless opportunities.” 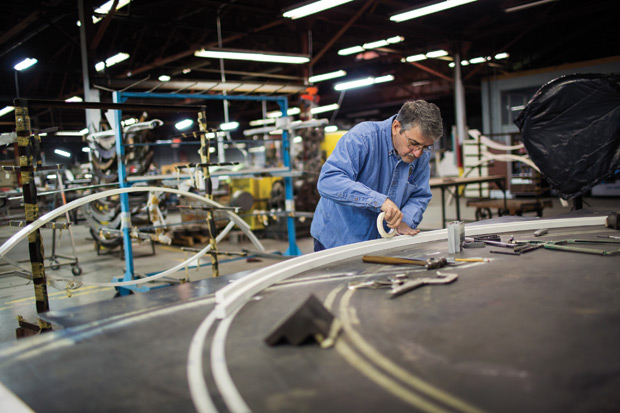 ▲ Rick Snodgrass, who does layout, makes glass mold bars for the walls of the doors. He has worked at the International Revolving Door Company for 42 years.

The “time capsule” nature of the building also influenced his decision. International Revolving Door keeps a record of every door ever created as old as 1897. Many blueprints are hand drawn on delicate onion skin paper. Hidden file cabinets throughout the warehouse reveal catalogs from the 1880s to the mid to late 1900s, and handwritten letters from Van Kannel to customers and vice versa.

“It’s like a museum down here,” says Kratochvil. “That’s part of the reason we bought it, because there’s so much history here. When we came in, it was almost like a time capsule.” 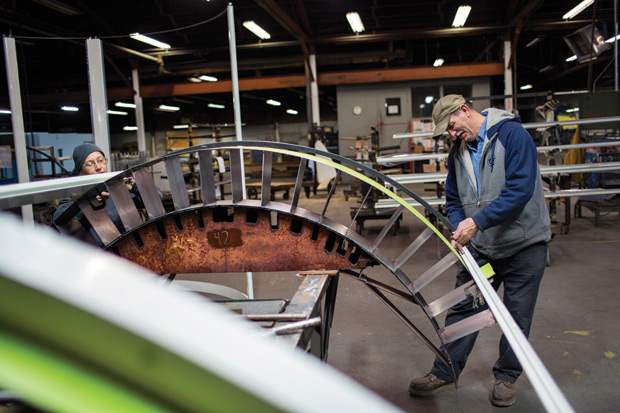 ▲ Precision welder Natasha McClure and Canopy Builder Alva Willis work together to build the door walls. McClure, who graduated from Ivy Tech, has been employed at the company since January, and Willis has been with the company for 34 years. Below, the International Revolving Door Company warehouse’s archive includes doors made for the McCurdy Hotel on Riverside Drive in 1936. The doors still are in the hotel today, which turns 99 this year. A $10 million restoration is underway by The Kunkel Group which hopes to have apartments in the building ready by mid-2016. 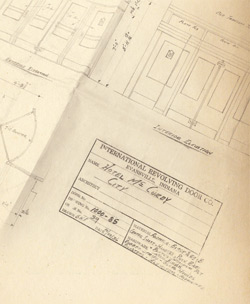 The story of the revolving door is almost as interesting as the business itself. It is said that the door’s creator Van Kannel despised opening doors for others — especially women — and invented the revolving chamber as a way to avoid social interactions. After being granted a patent on Aug. 7, 1888, Van Kannel formed the Van Kannel Revolving Door Co. with his main office and manufacturing facilities on E. 134th Street in New York City. Separately, in the 1880s, The Atchison Company had been formed in Atchison, Kansas, and began producing high-quality revolving doors.

International Steel Company began producing doors for Van Kannel in the early 1900s, and later acquired both Van Kannel and Atchison, moving all manufacturing to Evansville. The Igleheart family held a controlling interest in the company’s operations by the mid-1930s.

Evansville Metal Products was incorporated in 1961, and joined International Steel in the 1990s. International Steel closed in 1991, and Soyugenc purchased it in an auction the following year. The International Revolving Door Company continued under Soyungenc’s guidance, but in the company’s last year in 2014, only 22 doors were sold. After six months of business, the Kratochvils have sold 24 and counting because of the construction boom. The first door sold under new ownership was to a Buddhist temple in New York.

“I’ve been learning night and day from one of our toolmakers about the machining trade, and from the guys out in the shop about fabricating,” says Kratochvil. “I’ve stayed an hour or two after work every day learning how to weld. My goal is to be able to jump in wherever someone needs help or if someone needs to catch up.

“A lot of people ask why I want to do that? You aren’t going to get the respect you need if not, and since this is my business, I want to know every aspect of everything. It has been a steep learning curve but I feel a lot more comfortable and it doesn’t scare me. When you start putting in 16 hours a day out there and begin dedicating your life to it, you start learning. That’s what I’ve been doing. We hired people who are experts in these fields who have really helped guide us and train us.”

As early as age nine, Kratochvil’s father Jim says he noticed his son had an ambition beyond his years. Jim shares memories of Josh as a child looking at real estate magazines in Florida and having a great interest in business concepts. Josh received his financial advisor license at 18.

“I played one part and that was just the exposure to the environment,” says Jim, who retired as the CFO of Berry Plastics in January 2014. He also owns JPM Resources, a construction company headquartered in Evansville. “He heard daily conversations as he grew up with discussions about private equity, manufacturing issues and concerns, and discussions with customers. He would come down to the plant and watch me be involved in financing deals. Unfortunately for my family, I constantly talked about work at home … It always has been his goal to try to be ahead of his maturity and experience in age.”

Currently, International Revolving Door Company has 22 employees with most of those serving fulltime. Twelve of those 22 previously worked under Soyugenc before his death and the business’ closure.

“We are pleased to have rehired many of the company’s former employees, while providing opportunities to a new generation of quality workers from our community,” says Jim. 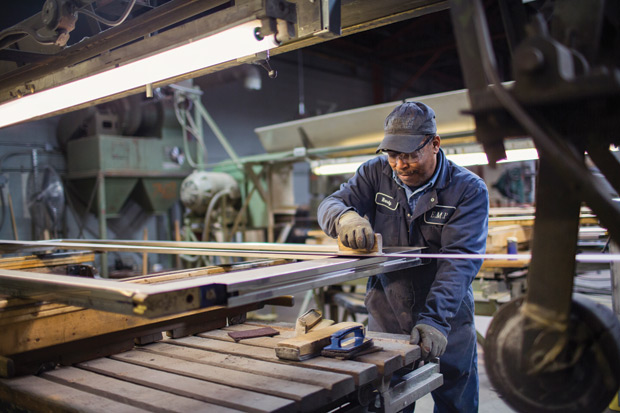 ▲ Randy Baker, who works in finishing, sands the finish onto a door.

“There are businesses where you look at them and you ask, ‘How does that business sell that product?’ They do because they have great people working for them,” he says.

Revolving doors typically cost around $25,000 to $65,000 depending on the type of material desired. The company asks for a lead-time of 10 weeks to complete an order, but can finish a door as early as four weeks. A revolving door pays itself off in five years because of how energy efficient it is, says Josh. In the winter when you open a regular push or pull door, you feel a rush of heat leaving the building.

“That doesn’t happen with a revolving door,” he says. “It’s always open and always closed so you are only getting a little bit of compartmental airflow going through there.”

“We have the best breakaway mechanism in the industry (International Revolving Door has four other large competitors),” says Josh of the wing collapsing mechanism made from manganese bronze castings. “If there’s a fire or something, at 135 pounds of pressure of it pushing on it, the wings or doors will breakaway into themselves so you can run through. One of our competitors has the doors in the new World Trade Center and they are having problems because they are breaking away on their own because of all the pressure, and we are in talks about consulting on their doors.”

International Revolving Door Company is the only manufacturer that provides circular enclosure walls fully welded, with no butt joints.

In addition to the revolving door business, the warehouse also houses the IRD machine and fabrication shop, and leases space to other companies, such as Berry Plastics. The company hopes to offer automation within the next year or two. 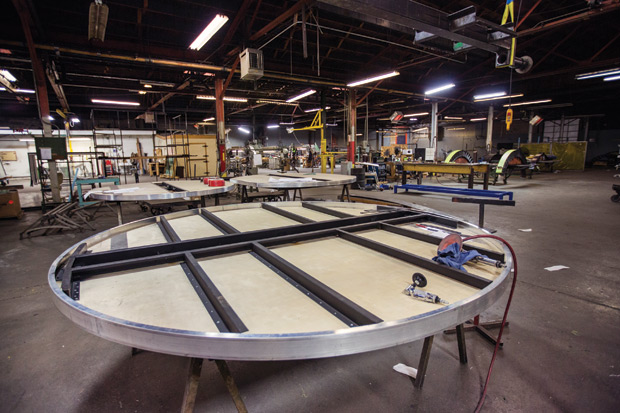 ▲ When Josh and Jim Kratochvil bought the International Revolving Door Company through an online auction, the purchase included the 130,000-square-foot building located at 2138 N. Sixth Ave. with all of the supplies and equipment. The warehouse houses the IRD machine and fabrication shop and leases space to other companies including Berry Plastics.

“All of my friends have said, ‘You’re 24, this can’t be a real business,’ but when they come down here and they see, they say, ‘Wow!’ It’s super busy, but that’s a great problem to have,” says Josh. “We have more people wanting us to do work than we even have capacity to do.”

For more information about the International Revolving Door Company, call 812-425-3311 or visit internationalrevolvingdoors.com.

The international Revolving Door Company’s warehouse is the home to blueprints of every revolving door designed and installed since the business began in 1907. The company keeps the blueprints on hand in case any of its more than 6,000 locations with doors need to review the design to update machine parts.

Josh Kratochvil, who owns the business with his father Jim, says even after seven months have passed, he continues to stumble on file cabinets full of historical documents such as catalogs from the 1880s to mid to late 1900s. 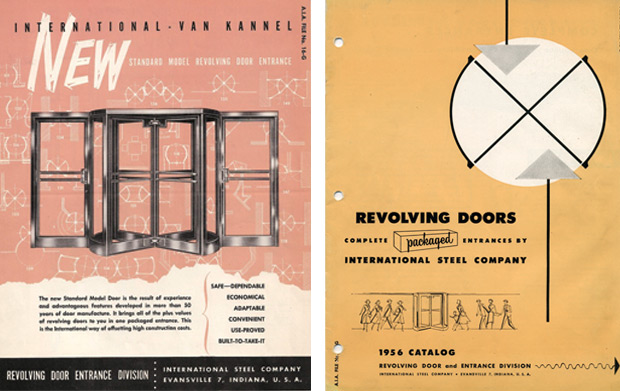 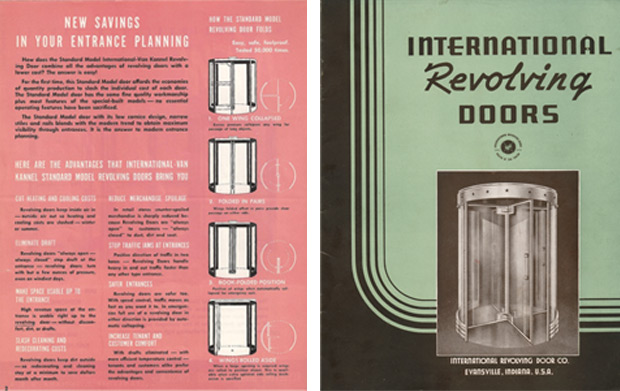 As The World Turns

The international Revolving Door Company has installed doors at more than 6,000 locations around the world. The company is known as the oldest and largest revolving door manufacturer. 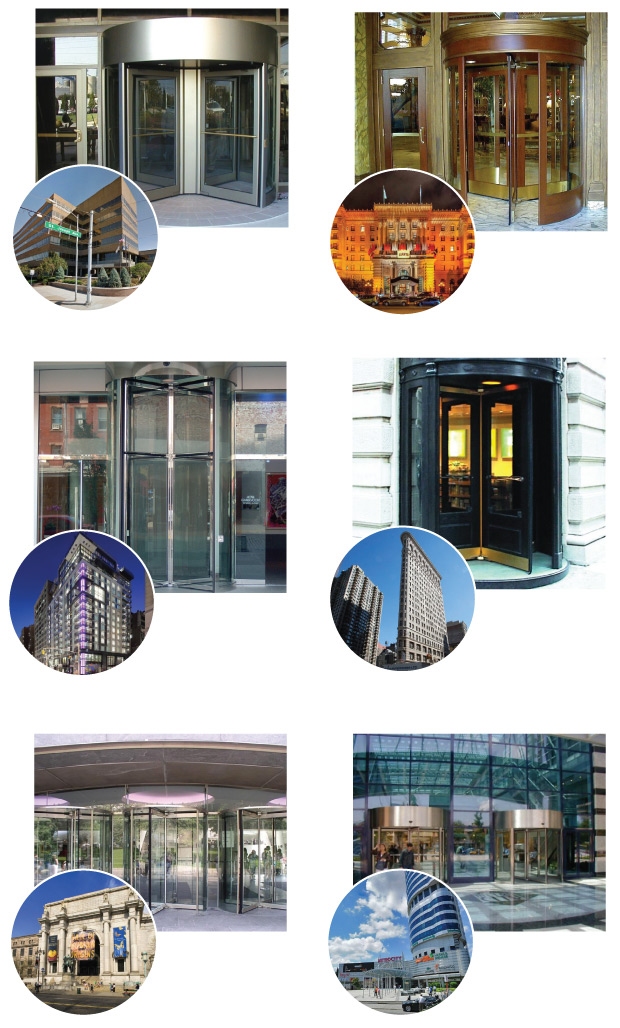