Views from the Top

He couldn’t have known it then, back in 1812. The settlement Hugh McGary Jr. started on the bend of the Ohio River has grown into the third largest city in Indiana. Today, Evansville is what it is because of families who’ve made neighborhoods their own and merchants who’ve strived to give back. In short, we are all here because of a simple belief: We can be better.

These aerial views of Evansville depict a side of the city most never see. Looking down from the clouds, they are worlds away from what McGary saw when he first arrived here, bought land, and started a family. Yet they are also the same. There is still that gorgeous bend in the river; there is still that fierce pride. In these shots — from the tops of buildings, from airplanes, and even from a pedestrian overpass — we see progress, change, development, and drive. We see not just Evansville, but expanded links to commerce, to athleticism, to family togetherness, to travel. We see us, on top of everyone else’s hard work, doing our best to be even better. This is Evansville, beyond our own two feet.

▲ Evansville riverfront looking north over Marina Point
Evansville is called the Crescent City for a reason. This view of the Ohio River’s sharp turn to the left, top right, also shows how the city grew out and around the bend in the river. Those who stroll along Dress Plaza can take an even closer look indeed. Photo by John Blair. 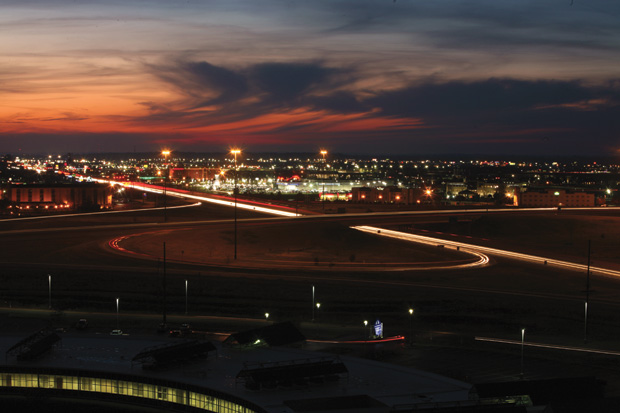 ▲ Dusk view from the top of Deaconess Gateway
Sunlight sometimes doesn’t do this city justice. In this dusk shot, you are able to see how far Evansville’s reach continues to be. Also pictured in the distance is a sample of the area’s stunning sunsets, which are usually most pronounced in the summers. Photo by Jerry Butts. 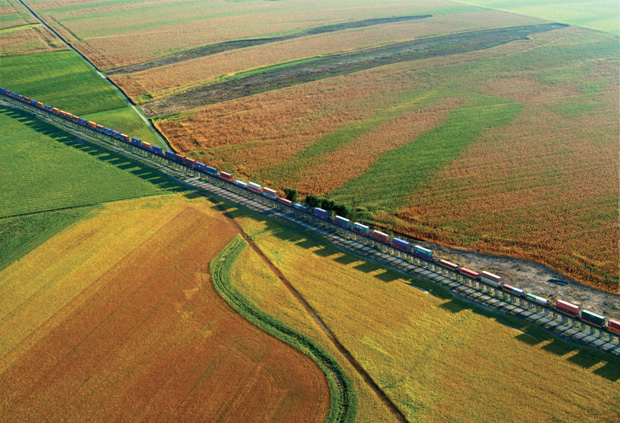 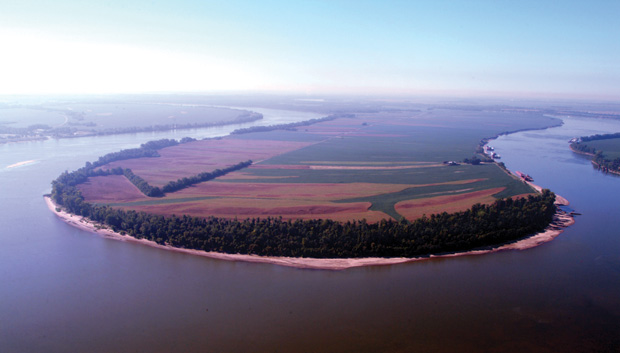 ▲ Bend in the river, overlooking Henderson, Ky.
This aerial shot of the bend in the Ohio River overlooking Henderson, Ky., top right, best represents the Tri-State area’s deep connection to the water. Evansville started out as a river town in 1812, and that bend is why it’s long been referred to as the Crescent City. Today, many boaters and fisherman take advantage of the river’s opportunities for fun and adventure. Photo by John Blair. 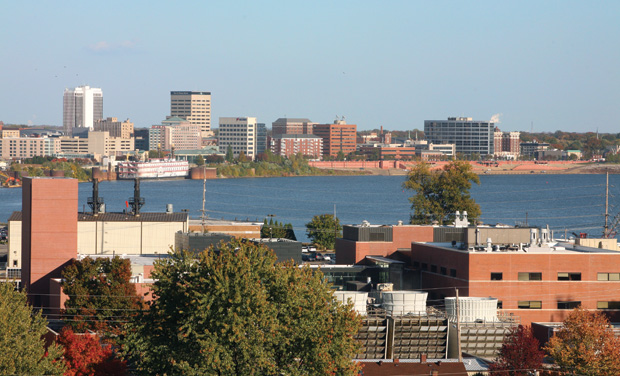 ▲ View from Reitz Hill
This view from Reitz Hill is possible because of coal mines that began operating near Evansville in the 1850s. At that time, the hill was known as Coal Mine Hill. These days, runners who compete in the Evansville Half Marathon see this view when they tie on their running shoes in the fall. The hill is named after F.J. Reitz, an Evansville banker and philanthropist. Photo by Jerry Butts. 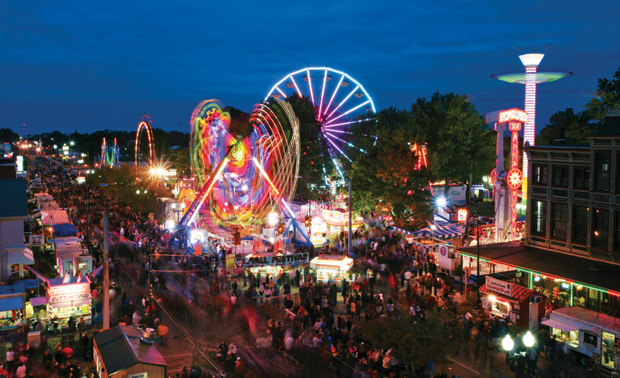 ▲ Fall Festival lights the night sky
This shot of one of Evansville’s most colorful evenings, below, was taken at the 2012 West Side Nut Club Fall Festival. The annual festival of food and amusement rides is a tradition for many Tri-State families who line up to sample unique flavors and take in the sights. It was named the “Best Local Festival” in the January/February 2013 issue of Evansville Living. Photo by Jerry Butts. 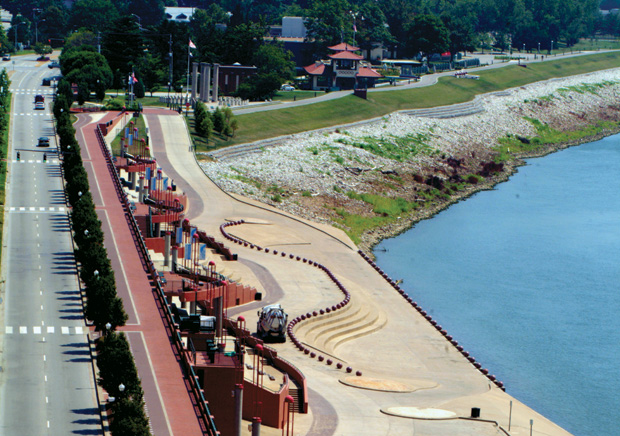 ▲ Dress Plaza
Dress Plaza, below, is a brick paved walkway that offers scenic views along the iconic Ohio River. Easily accessible, the plaza is always a popular site for views of the Fourth of July Riverfront fireworks. It’s also a favorite path for walkers, runners, and families with children. Parking is available along the lower plaza. Photo by John Blair. 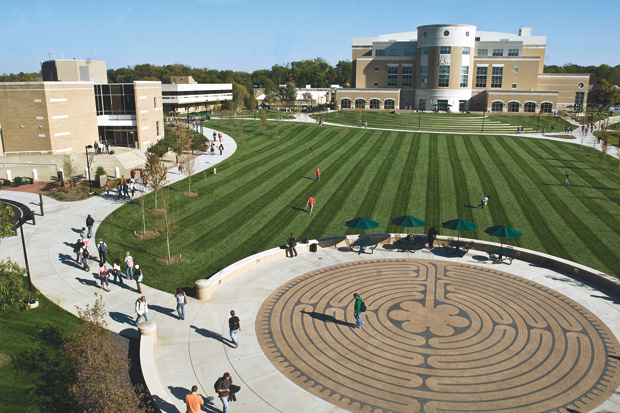 ▲ University of Southern Indiana
The University of Southern Indiana, top, continues to expand. More than 10,000 students are enrolled at this West Side campus founded in 1965 that is situated on 1,400 acres. Students have a choice of 70 undergraduate majors, 10 master’s programs, and one doctoral program. The view of the quad from the Liberal Arts building displays its beauty. 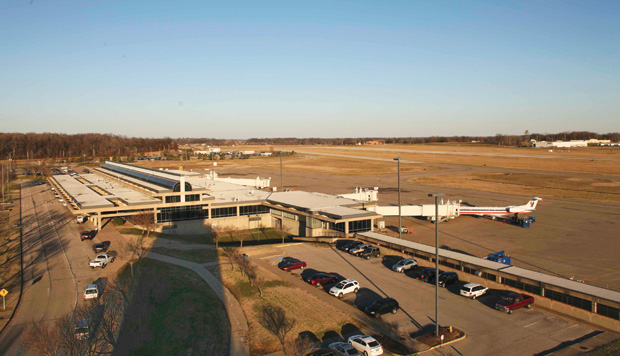 ▲ Airport from Traffic Control
The traffic control tower at the Evansville Regional Airport — from where this shot was taken — casts its own shadow in this view. The airport was established in 1928 and has grown from two small runways and one hangar, to two concourses and three runways flying passengers to airline hubs in Atlanta, Chicago, and Dallas. In January, the airport added four new jet bridges for passengers to board and disembark planes. Photo by Jerry Butts. 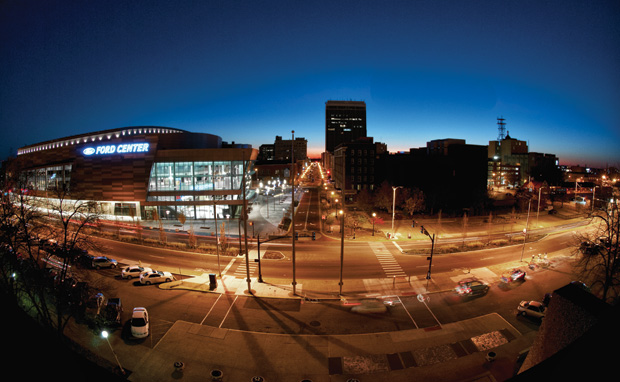 ▲ Ford Center at MLK and Main Street
Looking on from the Civic Center at the intersection of Martin Luther King Jr. Boulevard and Main Street, dusk captures Downtown Evansville. The addition of the state-of-the-art Ford Center in 2011 has brought this area to life. The Evansville IceMen, of the Central Hockey League, and University of Evansville men’s and women’s basketball teams call the Ford Center home. Photo by John Blair. 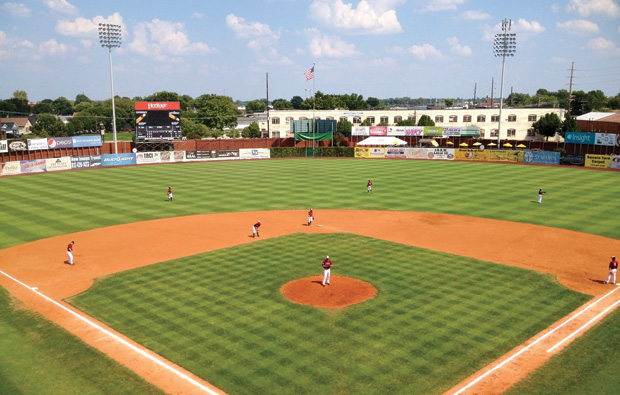 ▲ Bosse Field
This view is from the rooftop of historic Bosse Field, originally built in 1915. It’s the third oldest professional ballpark in the United States still in use today. The field is the current home of the Evansville Otters of the Frontier League but also was used as the backdrop for scenes in the Hollywood film “A League of Their Own.” Photo by Kristen K. Tucker. 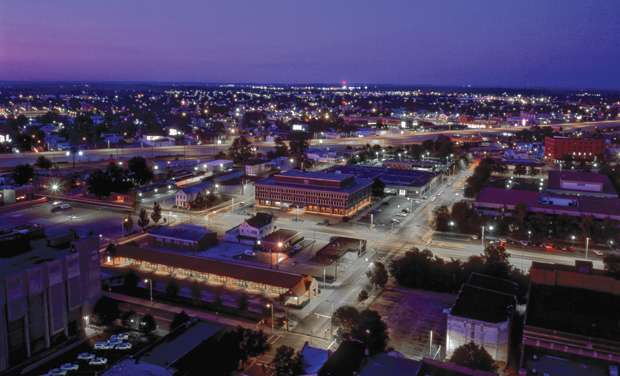 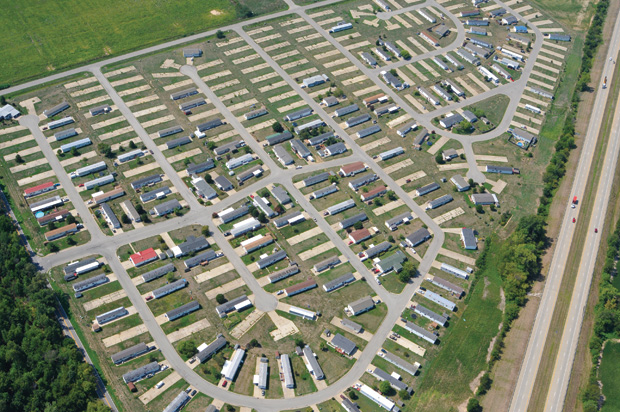 ▲ Eastbrook Mobile Home Park
Twenty Eastbrook Mobile Home Park residents were killed when a tornado swept through southern Indiana on Nov. 6, 2005. The tragedy led to the passing of C.J.’s Law, which requires new manufactured homes to be equipped with weather radios. Today’s aerial view of the park, above, demonstrates how relatively few people have returned to live there. Photo by John Blair.